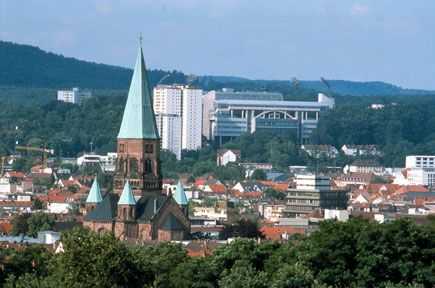 The Collection Munzinger shows exhibits from the world of dolls from the year 1900 until today: antique dolls, dolls from different producers and lables and thus exhibits from diffenrent materials of porcelain over “mass”, celluloid and vinyl. The collection also shows doll accessories and doll houses from the last century until today.
Since 1984 Ingrid Munzinger has been producing her own manufacturing reproductions of antique porcelain dolls in the traditional way. Mrs. Munzinger also designs teddy bears from mohair; for which she has received numerous prizes. On demand, Ingrid Munzinger wants to organize special tours in the doll studio and will showcase the step by step the emergence of a doll as a handmade reproduction, aqccording to an ancient model.

The club started with the museum as a project of the hundred year old history of the soccer club in Kaiserslautern. Hereos, myth, successes and anecdotes – the exhibition is a living documentation.
The special concept is the motto “fans will guide fans”. The ambition is to inspire the visitors for the history of the club. The voluntary service of the members of the boosterclub “Initiative Passion e.V.” offers guided tours under different individual local points.
Open: Changing opening times! Detailed information under www.fck.de/museum, or you can call Monday till Friday 9.00 – 17.00 hrs.

Museum of local history: “How it used to be” Farming, handcraft, distillery, Lambsborn

Our small museum on the hayloft farm shows old agricultural implements and articels of daily use. So a former farmhouse room is lovingly furnished. The potatoes, the potato distillery and their history are key aspects by the guided tour in the museum and the farm. Open on demand.

The private 50cc museum nightingale is located in the former bunker at the USAirbase Sembach. The brothers Christian and Helmuth Nightingale show more than 200 engine cycles with 50cc engines, all examples from the early fifties dead he end often he seventies and also a selection of very curious vehicles.

The museum is located in the historic city hall dating from 1836. The collection of more than 3,000 objects includes regional finds from prehistory and ancient history as well as a select coin collection from different periods. Well-preserved workshops of typical regional professions offering a vivid view of history.

The exibition – located in Puhlstr. 15 – shows the processing of the history over decades, not only vacuum claeners, thus the accessories and auxiliary equipment for car-painting, air freshener or oxygen transfer while washing for example. The technical background for low-pressure, venturing system performance and cruise will be shown in an interesting way.

Docu- and Exibitioncenter showing the history of the American Community at Ramstein and the Rhine-Palatinate after 2nd World.

The museum illustrates the history of iron smelting from the Thirty Years’ War to the end of the 19th century. Demonstrations of the blacksmith’s craft are given in the former village smithy.

Directly at the railroadcrossing in Erfenbach is the museum of the railway control center. In 1911 the control center was built at the trainstation Lampertsmühle-Otterbach. Since there is no need for the railway traffic. The guides are real "Railroader", who explain all details to tourists.

The museum of perfume is located on the site of the Company Green, producing perfume and cosmetics.

From the middle of the 19th century to World War II, poor economic conditions up to 2,500 musicians from the region to set out into the world each year to earn their living and their families.
The museum offers documents of the history of music making in the Western Palatinate.

The museum offers food and information around the pear wine, a traditional drink in the Western Palatinate. The centerpiece of the pear wine museum is an authentic fruit press made of sandstone.

This museum of local history shows archaeological finds from the Neolithic period and the Celts and Romans, altar bibles from the 18th century, and craft and farm implements from the 19th century.

The former Protestant church in Otterbach houses a large collection of historically important motorcycles of the racer Heinz Luthringshauser. In 1970, he was the German Champion in the 500cc sidecar class, in 1972 runner-up in the world championship and in 1974 the winner of the "Tourist Trophy", the hardest road race in the world.

The museum of local history is located in the "Old Townhouse". The baroque building dates from 1753. The slightly older bell in the baroque tower, from 1742, used to be a fire had broken out. The 18th century clock in the mansard still announces the time.

The old smithy Theis is one of the oldest blacksmith’s shops in the state. For the building of 1612 housed the smithy that came into possession of the Theis family in 1790. It is now operated as a museum smithy.

Museum in the Westrich, Ramstein

The Museum in the West is located in the former townhall, the oldest building of the town. The baroque building from the middle of the 18th century used to be a brewery and a guesthouse. The permanent exhibition presents interesting objects and information about the past; in addition there are changing exhibitions about current topics and art exhibitions.

The small exhibition illustrates the history of the circus performers which has its origins in the economic crises of the 19th century. People from Alsenborn would like to tour the country in summer as musicians, puppet players and acrobats. In winter they were brought off in the money.

Theodor Zink, folkloristic and arts and crafts are on permanent display. The downstairs area is the place for changing exhibitions.

The emphasis of the Pfalzgalerie Kaiserslautern nowadays lies mainly on the care and presentation of paintings and sculptures of the 19th to 21st century.

Franz von Sickingen as a person, his political and intellectual development and the historic background.