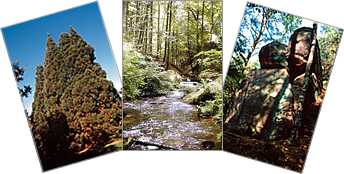 Mehlinger Heide Was laid out as a military training area at the time of World War I. In the years 1937 to 1945 the terrain was used by the German Wehrmacht; After the end of the was the French armed forces took over the facility. 1992, 1992. The nature reserve has. In 1992, the nature reserve has retreated to the Federal Republic of Germany a size of approximately 1,000 acres. It covers parts of the districts of Mehlingen, Baalborn and Neukirchen.

Billung which is quite common, especially among knights. The Billesweiher is surrounded by a mixed forest of beech and woodrush. The water is edged by a silt zone. A dam is penetrated by two amphibian tunnels.

The natural monument "misery gorge" with its diverse geobotanical phenomena is a unique attraction. Small terraced cascades and frothy waterfalls, bizarre weathered shapes in hard quartz Sandstone, block fields and overhanging red sandstone layers have been witnesses of the powerful force of running water since the beginning of the Mesozoic Era.

In the course of cultural history, the 3 kilometer long ravine has been an important political and religious border.

This is one of the most romantic hike in the Palatinate Forest. The valley owes its name to the Palatine huntsman Karl Theodor von Hacke.

Names like "Oberhammer" (upper pond), "rolling Weiher" (mill pond) and "iron melting" (iron melt) recalling the industrial past of iron smelting and metalworking in the Karlstal in the 19th century.

Deep in the woods, between Waldleiningen and Johanniskreuz, on top of the 459 m high "Roßrück (horseback)" hill, you can find a huge block of sandstone inscribed in Palatine dialect: "Here we grease the world’s axle and watch out that nothing happens!"

The inscription is a quote from the "Palatine World History", Paul Münch (1879-1951), in which he relocates twenty historically important events in the history of the Palatinate – thus making this area the center of the world and the cradle of mankind. And the sensitive task of "greasing the world’s axle", the poet wrote, what the responsibility of the people of the Palatinate. In the early 1960s, this inspired a local forester to erect this monument in the woods around Waldleiningen, where the "greasing" is now performing every year in a lively party.

The road from Landstuhl to Martinshöhe is lined by seven North American mammoth trees with the scientific name of "Sequoiadendron giganteum". They are over 25 m high and have their trunks a circumference of 7 m. Head forester Schütz – in 1861 at the service of Baron von Stumm – raised the trees from seeds in the former lodge garden.

The oldest mammoth tree specimen has an age of 3200 years.

The meat field hole is a ravine with primeval-like old trees. The pastures and fields at the bottom of the valley are used for the delivery of meat, hence the name of the natural monument.