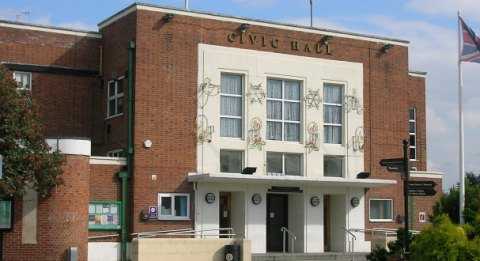 The idyllic stage in the woods is the setting for annual outdoor performances. It is one of the largest open-air theaters in southwest Germany.
Every year the summer program offers one to one and a couple of people performing from May to August.

Cultural and conference center "House of the citizen", Ramstein

The cultural and conference center "House of the citizen" Ramstein offers a broad program of guest performances by national and international ensembles and stars.

At the beginning of the 1990s this former post office was transformed into a modern cultural and conference center. Contemporary architectural elements were skillfully combined with the building’s historic façade.
It is a place for conferences, exhibitions, and performances of operas, musicals and plays.

The Landstuhl Castle Festival is held at Nanstein Castle in the summer months. A group of Palatine hobby actors performs comedies in local dialect at the castle‘s inner courtyard.

The Fruit Hall was built in 1843-1846 by the architect Augustus von Voit in the style of the Palazzo Medici in Florence and used as a market hall. Today the banquet hall is used for concerts and large social events.

informaion: Culture department of the city of Kaiserslautern, phone: 0631/3651410

The premises of the former are the sites of various concerts and events for young and old.

The "large stage" and the "studio stage" (Workshop stage) offer small, intimate studio productions of plays as well as grand opera, operetta and ballets of the "great masters".

The Weilerbach community center and its basement are the stage of the cabaret club "flail" Weilerbach with its wide-ranging program.

The title "BiS stage in the pen" stands for a variety of cultural offerings. The program ranges from classical music via brass bands, singer-song writers, literature, cabaret, magicians to jazz.

In the late 19th century, this public hall was the place where bands were put together. A special feature of the hall is its unique honeycomb-style wooden ceiling. The present Saal Kaiser offers a diverse cultural program.