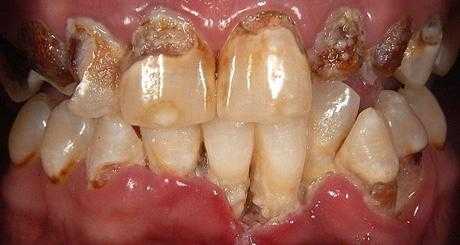 “Meth Mouth: For people who are dependent on hard drugs, general neglect with poor nutrition and poor or no oral hygiene plays a central role.

Drugs are substances with a central nervous action that are used for intoxicating or pleasure purposes. They change perception and have a more or less pronounced addictive potential [1]. For the following article, current literature on drug effects on oral health was evaluated – due to the diversity of the topic, it is not intended to be nearly complete.

Increased alcohol consumption increases the risk of periodontitis and the dose correlates with the effect [2]. In combination with tobacco, alcohol increases the risk of oral squamous cell carcinoma [3]. In addition to addictive nicotine, carcinogenic nitrosamines and aromatic hydrocarbons have an effect on cigarette smoking [4]. Cigarette smoke also impairs the blood circulation in the soft tissues. Wound healing is delayed, with an increased risk of surgical failure and periodontal disease.

Traditionally, but also in response to smoking bans, tobacco is consumed in many other forms. There is still no long-term data on the relatively new e-cigarettes. The nicotine content of systems working with heated steam varies widely, and the declaration is often insufficient [4]. In vitro it has been shown that periodontal cells have increased inflammation-related factors and age faster [5]. For shishas used in North Africa and parts of Asia, similar adverse effects were found as for cigarettes [4]. This also includes various forms of cancer in the mouth, jaw and face [6]. In the pipes, crushed tobacco leaves with aromas are heated, the smoke volume is up to 100 times larger than for cigarettes. In addition to nicotine, nitrosamines, heavy metals and carbon monoxide are also released.

Snus from Scandinavia is also becoming increasingly fashionable. The smokeless product is made from finely ground tobacco and flavours and, packed in small bags, is placed in the fold of the envelope. This form of tobacco also contains carcinogenic nitrosamines, with a corresponding risk of disease [7]. Tetrahydrocannabinol (THC) is one of the softer drugs in terms of intensity of action and addiction potential. Because of its muscle-relaxing and antimimetic effect, it is increasingly used for medical purposes. THC can be smoked or otherwise consumed as a resin extract (hashish) or in the form of dried inflorescences (marijuana, “grass”). Both products increase the risk of periodontitis when used frequently. Specifically, increased probing depths, increased attachment loss and more frequent severe course of periodontitis were found [8].

Hard drugs such as cocaine, crack cocaine, heroin and crystal meth can have serious effects on oral health. Addiction and the lifestyle associated with it lead to an unfavourable, often cariogenic diet and poor oral hygiene. In addition, there are direct toxic effects, stress-related bruxism and lack of access to (dental) care. Increased caries and periodontitis incidence leads to an average of about 3.5 fewer teeth than the normal population [9]. The effects described seem to be particularly severe for the amphetamine-related methamphetamine (crystal meth). There is a dose-effect relationship here, with cigarette smokers and women being particularly severely affected [10]. Meth Mouth” has a higher incidence of anterior caries. According to a recent survey, the most important etiological factor does not seem to be the type of drug intake (smoking, crystals or powder), but the mostly cariogenic diet and poor oral hygiene [11].

What dentists can do

Various study authors discuss the role of dentists, to whom affected patients come to practice as patients. With regard to tobacco consumption, there is a well-founded recommendation to advise patients to quit smoking, for example as part of periodontitis therapy [12]. If there is a suspicion of alcohol addiction or dependence on hard drugs, professional hygiene measures and appropriate information on oral effects can at least help to alleviate the consequences.

NoteContributions in the category Dentistry compact can in no case replace the clinical assessment of the reader. They are not recommendations for treatment, but are intended – on the basis of current literature – to support independent decision-making.