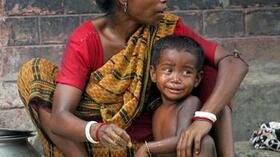 NEW DELHI. India’s new government is the first major reform project to enforce compulsory schooling for children aged six to 14 and the right to attend school free of charge. The law passed by parliament also prescribes private schools to reserve at least a quarter of their places for children from socially disadvantaged families and disabled pupils.

Minister of Education Kapil Sibal spoke of a national task that would shape India’s future: "We cannot afford that our children will not go to school". Non-governmental organizations estimate that at least seven million children in India have no education at all and half do not finish primary school. Many have to work instead. More than a third of the population cannot read and write.

The teachers in the state schools are poorly trained and underpaid, and the school buildings are often in poor condition. According to a 2004 World Bank study, appears everyone fourth teachers at state schools never go to class. Families that can afford it send their children to private schools. India ‘s finance ministry warned in its 2008 economic report, from the "demographic dividend" of a young population "demographic nightmare" if you don’t have the educational potential better ausschöpfe. 40 percent of Indians are under the age of 18.

The new law requires the Indian states to establish new neighborhood schools in under-served regions within three years so that every child can go to school. Parents or employers who prevent children from attending school must pay a fine. To get to grips with the problem of decaying school buildings and unwilling teachers, committees made up of parents and teachers should be able to manage school budgets and impose wage cuts. Finally, the new law prohibits parents from charging admission fees for their children, which often disappear into the pockets of local officials.

However, education experts fear deficits in the implementation of the ambitious project. "We are very concerned about that", said Renu Singh, director of the children’s rights organization Save the Children. For example, the financing of additional schools and the intended better teacher training not regulated in the law. It is also unclear what proportion of the costs the states will have to bear, which is a constant argument in Indian politics.

In the past parliamentary term, the Indian government spent 3.5 percent of its gross domestic product (GDP) on education. As a result, it clearly missed the target of six percent that it had set itself.