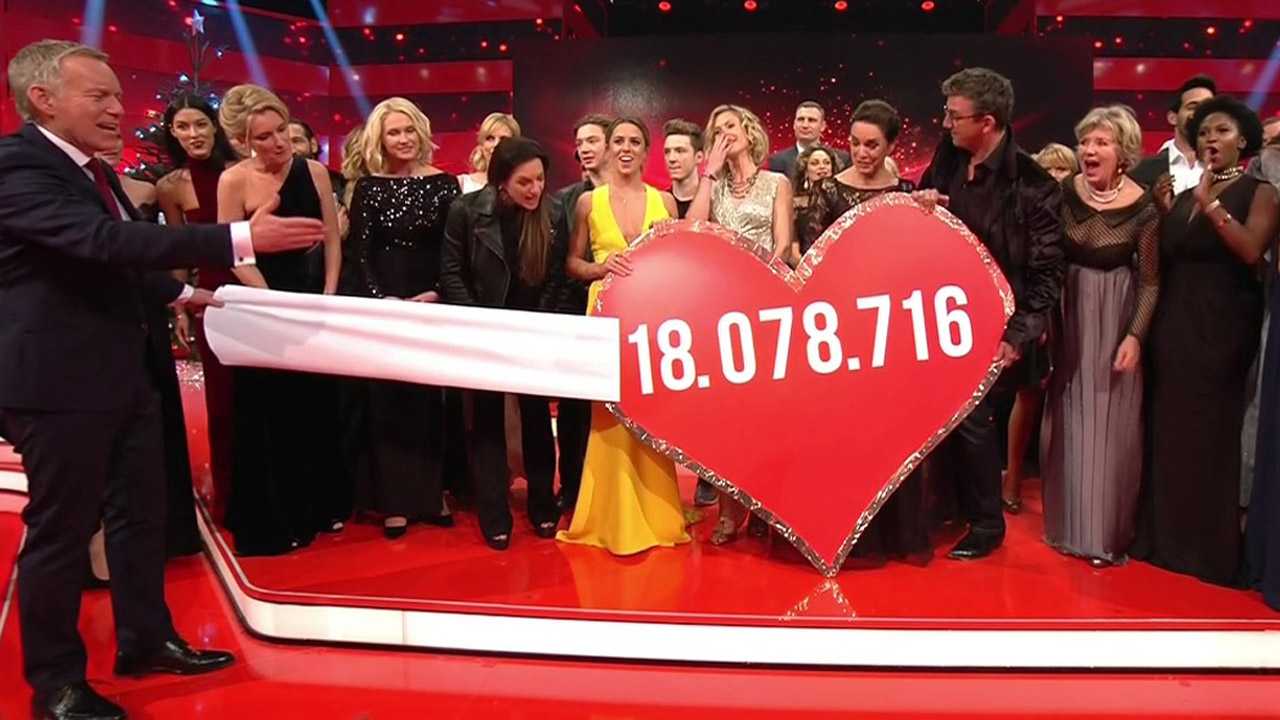 At the 16th big “Ein Herz für Kinder” Donation Show yesterday evening everything revolved around the most important people in our lives!

More than 60 celebrities collected the spectators’ donations in the live show.

speech of thanks in the wording

Honorary prize of the evening “The Golden Heart” for Queen Rania

It was a performance full of strength, courage and hope: Queen Rania was awarded at the big “Ein Herz für Kinder” gala.

Stars such as Manuel Neuer, Andrea Berg and Vladimir Klitschko presented aid projects and reported on the use of the money, 100 percent of which goes to children in need.

► One of the highlights of the evening: The award of the Golden Heart to Her Majesty Queen Rania al-Abdullah of Jordan (46) by Daniela Schadt (56), partner of Federal President Joachim Gauck (76).

“A heart for children” The red carpet of big hearts

“A Heart for Children” pays tribute to Rania Al Abdullah’s commitment to various children’s aid projects. The queen, herself a mother of four, is honorary chairman of the United Nations Girls’ Education Initiative and, as chairwoman of her Jordan River Foundation, fights to protect children from abuse and violence.

“Millions of children are at risk of death. But even more are at risk of living as if they were no longer here, isolated, wasting away, abandoned or invisible,” the Queen said in a moving speech.

The audience asked her: “How can that be? In a time of unprecedented progress and opportunities where all we have to do is press a button or click a mouse to connect, engage and engage in the world. How can this happen before our eyes?”

The video highlights of the red carpet A lot of skin, a lot of heart

At the end Queen Rania Al Abdullah insisted: “Let us say this evening to all children everywhere: We see you! And tomorrow – and all days after that. Let us work tirelessly to open our hearts and keep their hope alive”.

Perhaps the millions donated by the Gala could be a first step in this direction. Every cent donated goes directly to selected aid projects such as children’s clinics, therapies, kindergartens, soup kitchens, schools as well as sports and educational projects at home and abroad.

Shortly after 22 o’clock Nico Rosberg (31) entered the stage and introduced himself to millions of ZDF viewers as the new Formula 1 World Champion.

“We made it. It’s gigantic. We’ll never forget that. “How does the new champion and his wife Vivian (31) continue after his surprising resignation? “We have many common projects. I’m not worried about that. Now we’re going on a big vacation, we haven’t booked a return flight yet…”

Then Nico Rosberg announced: “Daimler is donating one million euros for “A Heart for Children”! “We now have a daughter of our own, so it is even more important for me to support children,” said the world champion. “We are really proud to be here today.

Moderator Johannes B. Kerner (51) led the show for the fourth time. Numerous stars, including Sophia Thomalla, Peter Maffay and Angelique Kerber, answered the audience’s phone calls to collect donations for children in need.

Superstar Marius Müller-Westernhagen (67) appeared for the first time together with his daughter Mimi (31) in the TV Gala. Also on stage: Nena (56), the Scorpions and alpine rocker Andreas Gabalier (32).

Comedy star Ralf Schmitz (42) walked through the ranks as a donation hunter and practiced “pickpocketing”. His first victim: Daniela Katzenberger (30) – that brought in 400 Euros. Then it was Verona Pooth’s (48) turn to donate roulette: she raised her 200 euros from the scratch ticket to 3000 euros! Uschi Glas (72) donated 5000 Euro, Tatort Commissioner Maria Furtwängler (50) even 10 000 Euro!

The result at the end of the broadcast: more than 18 million euros. An evening that went down to the heart.