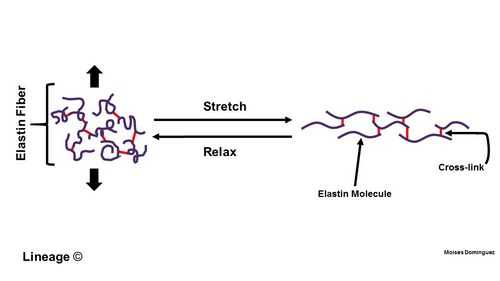 elastin is a structural protein involved in the formation of connective tissue of the lungs, blood vessels and skin. In contrast to collagen, which also occurs in connective tissue, it is very elastic. The elastin molecules crosslink with each other in the extracellular area.

All vertebrates contain the fiber protein elastin. It is a structural protein responsible for shaping such important organs as the lungs, blood vessels or skin. Together with collagen it forms the connective tissue of these organs.

The properties of elastin and collagen complement each other. So elastin, as the name suggests, in contrast to collagen very elastic. As a result, the connective tissue of skin, lungs and blood vessels becomes stretchable and deformable. The functions of these three organs require constant resizing. Elastin is mainly composed of the amino acids alanine, glycine, proline, valine, lysine, leucine and isoleucine. Within the molecule, hydrophobic and hydrophilic areas alternate.

In each hydrophobic domain, characteristic units of the four amino acids alanine, proline, glycine and valine are repeated. The hydrophilic areas are mainly lysine. The lysine residue is oxidized to allysine by the enzyme lysyl oxidase. This results in the replacement of the terminal amino group by a carboxyl group. The lysine residues of the different protein chains combine to form a circular desmosine, thereby linking the different chains.

The connective tissue has as structural protein for the most part collagen. It is tear-resistant, but would be too rigid as the sole structural element. Only the combination of the properties of elastin and collagen makes the connective tissue stretchable and at the same time tear-resistant. The basic building block of elastin is the tropoelastin. Tropoelastin is composed of alternating hydrophobic and hydrophilic domains. It has an approximate molecular mass of 72 kilodaltons. The Tropoelastineinheiten crosslink with each other on the lysine residues.

While tropoelastin is water soluble due to the many hydrophilic domains, the water solubility of the crosslinked polymer is abolished. Tropoelastin is formed within the cells and reaches the extracellular area via membrane transport. There, the crosslinking of the basic building blocks takes place, whereby annular desmosine units form at the crosslinking sites. Desmosin formation always involves three allysine residues and one lysine residue. Since allysine is an oxidation product of lysine, ultimately four lysine residues are linked together.

This form of compound gives the elastin its particular elasticity. Crosslinking also protects elastin from denaturation and degradation by almost all proteases. However, the enzyme elastase is an exception. It is the only protease capable of degrading elastin. So also the degradation of the absorbed by the food elastin succeeds.

As already mentioned, elastin is a necessary component of the connective tissue of the lungs, blood vessels and skin. This affects all vertebrates. The basic building block tropoelastin can hardly be detected in animal tissue. After the lysine residues have been converted to allysine by the lysyl oxidase, three allysine residues with a lysine residue are crosslinked immediately. Elastin almost only occurs in its crosslinked form.

Nevertheless, the detection of tropoelastin in animal studies by the inhibition of the synthesis of lysyl oxidase has succeeded. If this enzyme is missing, lysine is not converted to allysine and thus not to elastin formation. The resistance of elastin to degradation by proteases protects the skin, lungs and blood vessels. The degradative effect of elastase is limited by elastase inhibitors.

The disease can be both acquired and hereditary. Family accumulations are observed. Among many other symptoms, this connective tissue weakness also occurs in Williams-Beuren syndrome. Again, it is a hereditary structural anomaly of elastin. The cause of this disease is a mutation on chromosome 7. Furthermore, there is also a congenital aortic stenosis, which is based on a disorder of elastin structure. At the same time the main artery of the heart is narrowed. From the left ventricle, the blood can flow only delayed in the bloodstream.

Long-term heart failure occurs. Five to six percent of all congenital heart defects are congenital aortic stenosis. Some forms of Ehlers-Danlos syndrome also assume elastin formation. This disease is characterized by an over-stretchable skin, which is referred to as rubber skin. The weakness of the connective tissue affects many organs, including the heart and the digestive tract. The syndrome is usually autosomal dominant.

The so-called Menkes syndrome, in turn, among many other symptoms also leads to connective tissue weakness, the cause of which is to seek in a disturbed elastin synthesis. In fact, Menkes Syndrome is characterized by a disruption of copper uptake in the body. However, copper is a cofactor for many enzymes. Among others, this includes the lysyl oxidase. Without copper, the enzyme is ineffective. The conversion of the lysine residues into allysine no longer takes place. As a result, the cross-linking of lysine residues to desmosine can no longer function.