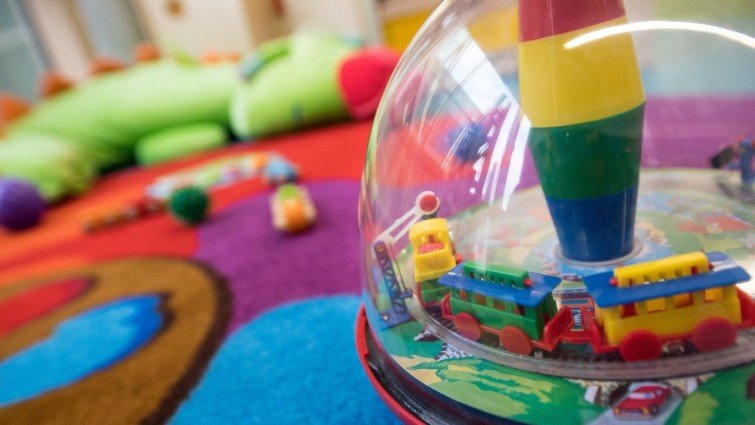 In Sjöfararens Förskola, the seafaring preschool, the little ones – between one and two years old – have just woken up from an afternoon nap. Some sit in banana boxes, others play with milk cartons. Three blond children run through the room and roar like predators.

Jackets hang in the anteroom, molds are lying in the sandpit outside – actually a normal kindergarten. But the preschool in Hammarbyhöjden, a suburb in the south of Stockholm, has its own gender educator with the 54-year-old Elis Storesund – this is still unusual in Sweden. She is about nothing less than lifting the distinction between men and women in kindergarten, Storesund explains:

"The educator asked himself whether it was the role models"

Next door, with the slightly older, there is tinkering, building, painting. All walls hang full of pictures with patterns that are windows colorful painted, woods and colors are so low on the shelves that the children can get there themselves. There are no ready-made games such as puzzles or memory, everything is creatively developed by yourself. And the children are familiarized with things that were not typical for their gender in the past. Boys learn to dance here, for example.

"In the group with the oldest children, we noticed that when there was dancing, the boys did not want to participate. The educator asked himself whether it was because of the role models and that they thought that it was not boyish to dance."

The educators then tried to divide the children into groups of girls and boys, so that the boys were less afraid of contact. That didn’t work at all, the boys continued to refuse.

"Then we mixed a group and the children then danced several times a week. And when all the children got used to it, the boys started dancing in the group."

"We do not additionally say that she is a girl"

Girls are often brought up to be good. Against this, the educator Elis Storesund works with her colleagues.

"We want to teach girls to say ‘stop’. You can see from teenagers today that girls are still sexually harassed. Boys think they have the right to do that. We have to start teaching boys how to be sensitive to all their friends in kindergarten. Not just towards girls. But sometimes it’s the other way around and boys don’t dare to say no and girls take up too much space."

In front four Years ago a new pronoun was introduced in Sweden. Next "he" and "she" there is now the gender neutral "hen". So far, the children only with "hen" to address, the educators in the seafaring preschool do not go. But:

"It can happen that a girl says: Today you should call me ‘he’. Okay, then I address it with ‘he’. We listen to what the children say themselves. If a girl identifies herself as a girl, then we respect that. But we don’t tell her that she is a girl and has to behave in a certain way."

And because male main characters are the norm in children’s books, the educators sometimes swap when reading aloud "he" through a "she" or use the gender-neutral hen for the actually male bear.

Against gender stereotypes for 20 years

Since the end of the 1990s, the Swedish school authorities have prescribed that educators should counteract gender stereotypes even in kindergarten.

One cliché, however, still applies: in kindergartens, like in Germany, men are rare. Anders Olsson, in his 50s, a kindergarten teacher in Hammarbyhöjden and formerly an engineer in the telecommunications industry, is a big exception: only two percent of pre-school teachers in Sweden are male.

Anders Olsson, educator in a Swedish kindergarten and an exception in this profession as a man (Deutschlandradio / Victoria Reith)

For the children themselves, it doesn’t matter whether the educators are men or women. Masculinity itself is, however, a problem, says Olsson:

"Violence is still allowed in the male repertoire, and that’s not okay. This is one of the factors that motivate me to work in gender education: to counteract the violence that mostly emanates from men."

Olsson tries the statistics: Of those who are in Swedish prisons for physical violence, more than 90 percent are men.

Gender education successful according to a study

Gender education was hesitantly adopted by some in Sweden 20 years ago, and there was talk of indoctrination and gender madness. Today, most parents are open-minded, says Anders Olsson:

"Because all parents of a girl want her to be heard and express her displeasure. And if you have a boy, you want him not to hit himself and to be able to talk about his feelings."

The concept seems to be having an effect: a study by the University of Uppsala last year concludes that children who are brought up in gender pedagogy have fewer prejudices and play more often with foreign children of the opposite sex.

The seafaring preschool in Stockholm could therefore be a role model – even if not all Swedish parents are yet convinced of gender education.