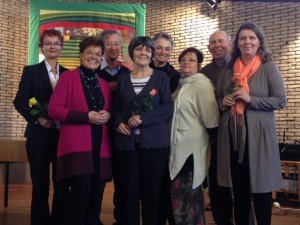 On Sunday, November 10th, took place in the church on Billebrinkhöhe Fair trade worship on the subject of “child labor" instead of. The service, which was prepared by the One World Team at Billebrinkhöhe together with Pastor Gudrun Weßling-Hunder, made it clear how many children in developing countries have to make their daily contribution to family income and how big the income differences are between the rich industrialized nations and the poor countries.

Frans Maat introduced the topic by pointing out that 215 million children between the ages of five and 17 have to work to feed their families. For every second child, this achievement is dangerous to health. About that in addition, they often only receive starvation wages for this hard work. A school visit is unthinkable in this life context. The causes of child labor are complex: in addition to poverty, social structures such as the caste system in India and economic potential are just a few of the causes.

The basic question is: What contribution can we make so that the social and economic conditions for children in the respective countries change in the long term and sustainably? 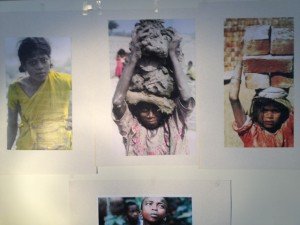 1. The eleven year old Suma lives in Jharia in India. She is a coal collector and collects leftover pieces of coal every day on the city’s coal dumps with her younger sister. She carries the heavy baskets of coal with them on her head, where the coal is crushed with an iron hammer so that it can be sold on the market.

2. The eleven year old Alfonso works in a clay mill and brick factory in Lima in Peru. He uses a hoe to cut thick patties, press them into heavy wooden molds and then tip them over with his younger one Brothers around. The stones then dry. The smaller siblings up to the age of four turn the bricks, the older ones bring them to the brick factory. They suffer early from back problems, diarrhea and typhoid from dirty water.

3. The twelve year old José lives in Brazil. He works in the sugar cane fields, where he hits and bundles the sugar cane. For six working days of twelve hours each, he gets 15-23 euros. He can’t go to school. His tools are a pair of raven black, punctured gloves and a machete

The worship service went to the Family-Posielek Foundation, who supports street children in India. A child can go to school there for 10 euros a month, and can go to high school or even study for 20 euros. The foundation works quickly and directly and guarantees that 100% of all donations go to the projects, because the employees work on a voluntary basis and without any expenses. It also controls how and where the donations are used.

We can also make our own contribution by buying fair trade products in world shops or products with a Transfair seal in the supermarket. There is also the possibility of writing letters to politicians or textile company owners so that the problems in developing countries become more focused. 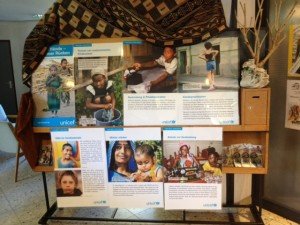 After the service there was an opportunity to get one Unicef ​​exhibition to look at child labor and buy products at the One World booth. Many thanks to the preparation team (Jutta Maat, Frans Maat, Bettina Sahlmann, Theo Drees, Ursula Kopetzki, Ingrid Nowotny, Sabine Metin, Gudrun Weßling-Hunder) for the intensive, stimulating service!