The Festival of Young Artists 2011 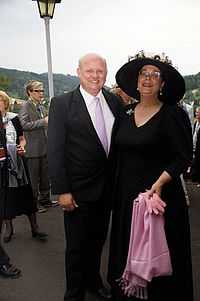 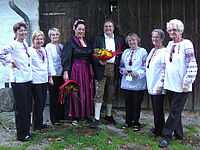 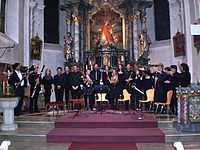 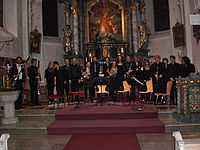 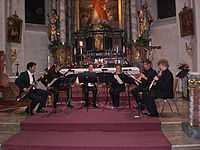 The “Music of the Future”, played by young talents from all over the world, wants to be the festival of young artists Bayreuth. And after what was heard at the opening concert, the “Festive Serenade” in the Boniface Church in Warmensteinach, you do not need to worry about the future.

The Festival of Young Artists Bayreuth is visiting Warmensteinach for the eleventh time. Since a circle of culturally interested contacts to Intendant Sissy Thammer began, the international young artists every year in the Fichtelgebirgsgemeinde guest. They offer musical enjoyment, and a committee of locals in turn cares in each case touching the young artists and also always organizes a small reception.

Thus, the appearances in Warmensteinach are now an integral part of the festival program. “We come to friends,” emphasized Thammer in her brief welcome, pointing out that cultural encounters are also part of the festival. There are four events this year in Warmensteinach area. And this opening concert was only praiseworthy: “Everyone was thrilled,” says Regina Rabenstein of the Tourist Information, one of the ladies from the Warmensteinach Committee. Standing ovations, frenetic applause and two encores clearly demonstrated this.

“That was a highlight tonight. A wonderful chamber orchestra, beautiful music, “began listener Gerhard Hytroschek from Bayreuth in a first reaction to rave. And he also highlighted the “soulful trombonist and an incredibly virtuoso violinist”.

Horst Köhler, namesake of our former Federal President from Frankfurt, found it particularly amazing how committed the young artists were to this concert. “There comes the spark over to the listeners”. Incidentally, he extends his festival stay for a week for years and then gladly takes all the offers in the region was.

Bayreuth Wolfgang Richter also speaks of “excellent quality”. Especially in view of the breadth of the pieces offered and how the young artists lived up to the different demands, he is fascinated.

For the program combined modern works by Edvard Grieg, Lars-Erik Larsson and Pablo Sarasate with sounds by Mozart. In any case, Ilse Hauschild of the committee recognizes without envy that the Russian up-and-coming artists have a very high level of education. Technically sophisticated and tonally perfect, “very precise and expressive,” she joins the praise of the audience and is pleased to present “musicians of the highest caliber” in Warmensteinach – in front of almost completely occupied rows in the Church of St. Boniface, the with their good acoustics contributed to an atmospheric evening.

The orchestra Young Soloists St. Petersburg currently consists of three gentlemen and 14 ladies under the direction of Arsen Enikeev. Another in his opinion questioned domestic guest presumably quite rightly that of the musicians of the evening in the future might be heard more often.

“Opera in Bavarian”
on Friday, 12.08.11, Freilandmuseum Grassemann
Reading and music followed by a farmer’s bread. It read Sissy Thammer and Wolfgang Eizinger, musically accompanied by Windspiel.Consort
Music of the Baroque, European Classical and Ukrainian ethno music

One year with the woman Venus is too much
Tannhäuser’s love nest was in the Kampenwand: Opera in Bavarian

With a pleasurable interpretation of the “Tannhäuser” – keyword: opera in Bavarian “- the Festival of Young Artists Bayreuth in the open-air museum Grassemann.

“Who thinks that the wall of battle amoi a Liabsnest gwen knows? It was her! “At least according to the director of the Festival of Young Artists, Sissy Thammer, and Wolfgang Eizinger, who told an enthusiastic and amused audience in Tannhäuser’s” Bavarian Opera “at an extremely enjoyable and demanding late afternoon in Grassemann Freilandmuseum has fled into the Kampenwand.

With a healthy dose of humor and hearty charm, the two interpreters had the audience experience “Tannhäuser” in this way, but did not deny the original contents of the great operatic literature in the implementation of the material.

Burned in love and drunk with joy, the minnesinger in the wall of the goddess of the Kampen describes “be Gfui: I stay with you, I can do what, wui. Nevertheless, he, “the old spell pouch” (voice from the audience), remained only a year, because “sensual pleasure is jednfois – for oan wia mi no long net ois”: he returns ruefully to the lovely Elisabeth, the “g’mütskrank gwen a long time and then gstorm is with sadness “because she feared,” the lover can go no oamoi on camp wall. And a he dies on the Stell dahi, out of grief, distress, just as she – without the hoped-for mercy of “Saint Stui, for a year at the wife of Venus is simply zvui”.

That’s where the shepherd’s staff founds as a sign of forgiveness, and that over the worldliness God still stands, as the opera wants to make clear, says Sissy Thammer. In good Bavarian: “God is hoit always no – the glaabst, merciful ois wia the Pope.”

“Wunderbar!” – a great complement to Wagner’s opera “-” Now I first understood the “Tannhäuser” correctly “, praised the audience in the highest tones.
Of a liveliness was also the music that the group Windspiel.Consort darbot. On typical Ukrainian instruments (Sopilka, Bandura) and wonderful solos, with works by Mozart, Vivaldi, Telemann, van Beethoven, Marcello and of course from “Tannhäuser” fascinated the young artists who, it seemed, even enjoy every sound. A special treat for the ear and the eye (costumed soloists with pink ears) was Rossini’s cat duet.

The end was also hearty Bavarian: a snack prepared by the Warmensteinach Committee, which guests and performers enjoyed to the fullest.

The woodwind ensemble under the direction of Lelim Aykal guested on 17 August in St. Laurentiuskirche in Oberwarmensteinach. It consists of young musicians from all over the world and its program was just as colorful as its members. It ranged from Haydn and Mozart to Anton Reicha, Jacques Ibert, Franz Krommer and August Klughardt. Different eras and styles are covered. The young musicians always acted at the highest musical level and expressed the joy of making music in a sovereign manner.

During the break, the expert audience praised the colorful performances
diced group and visibly enjoyed the committee’s own for that "Festival of young artists" created "Festival Kick"!

The audience celebrated the ensemble with long-lasting applause for their outstanding performance.

An extraordinary concert took place on Friday in the fully occupied Trinity Church Warmensteinach: Five harps, something our 300-year-old Holy Trinity Church has not experienced – raved pastor Christine Schlör at their brief welcome.
The audience listened to the sounds, it was quiet – no breeze felt –
the most atmospheric rounding off of a summer day in August!

A harp ensemble under the direction of Ruth-Alice Marino. The ensemble consists of young musicians from different nations (Spain, France, Italy, Japan and Germany) and presented in its program next to “harp classics” as the canon in D major by Pachelbel also unusual arrangements with swinging rhythms such as “Chanson de la nuit “by Carlos Salzedo.

The Warmensteinach audience rewarded the young artists with true cheers and frenetic applause and dismissed the artists after an encore.

It has become apparent that our festival in August in Warmensteinach is indispensable. It has become a fixture of our community and attracts many visitors from the surrounding area in addition to guests and locals. This shows the very good visit of the individual events. The listeners know that they can enjoy music enjoyment of a very high level and practically for free. Let’s look forward to the next season!