What is fever and diarrhea??

If diarrhea and fever occur together, it is usually an infectious disease. Infectious diarrheal diseases can manifest themselves in watery, mushy or bloody stools and are accompanied by symptoms such as nausea, vomiting, abdominal pain and fever. Infectious diseases with diarrhea and fever are often self-limiting. This means that they often stop on their own after a few days without special treatment.
In older and immunocompromised people, however, such a disease can last longer and be complicated. Bacteria such as Campylobacter, Salmonella, Shigella or Clostridium difficile are often responsible. In addition, viruses such as rota or noroviruses and parasites such as amoebas and lamblias can be considered as the cause of a febrile diarrhea. 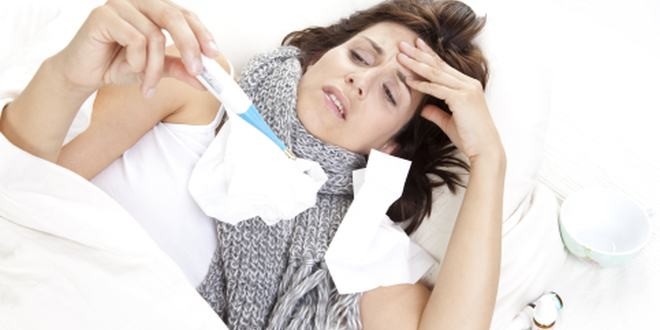 Anti-diarrhea medication is usually not necessary. Often enough fluids are enough and wait until the symptoms subside. Medical coal and herbal remedies, such as extracts from the Uzara roots or pectin from the apple can alleviate the symptoms.
Drugs like loperamide inhibit strong bowel movements and should not be taken for more than two days and only under medical supervision. Occasionally probiotics taken in case of diarrhea. Probiotics such as probiotic yoghurt have a positive effect on the intestinal flora. Home remedies such as plenty of fluids, tea and the right foods are often sufficient.
Light fever is also often treated with home remedies in adults. There is a risk of febrile seizures in infants and young children. Therefore, babies and children with fever should always be examined by a doctor. A classic among antipyretic drugs are paracetamol, ibuprofen and acetylsalicylic acid (Aspirin®). Acetylsalicylic acid is not suitable for children.

If acute diarrhea occurs, the symptoms often improve on their own after one to three days. In order to compensate for the loss of fluid and electrolytes due to the diarrhea, drinks such as tap water, still mineral water and herbal teas are recommended. Fennel, peppermint, chamomile and blueberry tea are excellent home remedies for diarrhea. Black tea also contains tannins that can soothe an irritated bowel. To compensate for the loss of water, it is particularly important to drink a lot. Carbonated drinks and whole milk should be avoided if you have diarrhea.
A traditional home remedy is grated apple. The pectin it contains acts as a swelling agent and soothes the intestinal mucosa. You can eat well-tolerated foods such as rusks, crispbread, mashed banana, low-fat meat, mashed potatoes, scrambled eggs or porridge. If you have diarrhea, you should avoid fatty, spicy dishes, sweets and legumes.
In addition to home remedies for diarrhea, there are tricks to naturally lower the fever. A teaspoon of honey in tea is said to have a positive effect on the immune system. A proven home remedy for fever are vinegar Stockings. To do this, soak tummy wool socks in a mixture of 4/5 water and 1/5 apple cider vinegar. You put out your stockings and put them on. You can wrap your legs in a towel or blanket and wear them for 45 to 60 minutes. The acidity of apple cider vinegar promotes the release of heat through the skin. In addition, a damp rag on the forehead helps with fever.
washings are another popular home remedy for natural fever lowering. To do this, a sponge or rag is immersed in water that is 5 to 10 ° C cooler than body temperature. You rub the body with it from top to bottom and from the outside in. The moistened parts of the body are then wrapped in towels. After a wash, take a break for half an hour before doing another wash.

There are no globules that specifically treat the two symptoms of fever and diarrhea. In the case of watery diarrhea and vomiting, globules with Arsenicum album are said to provide relief. The remedy can also be used for febrile infections. General measures such as plenty of fluid and broth are also recommended in homeopathy.

When do I have to see a doctor?

If fever and diarrhea last for several days and that Complaints show no signs of improvement, you should go to the doctor after 3 days. Many infections that cause fever and diarrhea are self-limiting and go away on their own after 2 to 3 days.
Babies and toddlers have a low threshold to develop a febrile seizure when they have a fever. Therefore, you should go to the pediatrician with your child if you have a fever. In young children and schoolchildren, fever should be treated carefully and the pediatrician consulted before taking medication.

Suffer from one Flu or cold?
Answer to this 11 short questions and find out if you have the flu or a cold.
Click here for the Test flu

Self-limiting diarrheal diseases that are associated with fever often resolve on their own after one to three days. This applies, for example, to food poisoning such as salmonellosis. Other illnesses that cause fever and diarrhea can last longer. With Yersinia, diarrhea can last up to 14 days. Complications of yersiniosis, such as joint problems, can even occur weeks to months later.

Diarrhea and fever are not only unpleasant for children, but also extremely worrying. Children quickly become dehydrated and usually do not have the consciousness that adults have to drink more if they have diarrhea. Children dry out faster than adults. Dry mucous membranes, a dry mouth, hardly any tear formation and insufficient urine formation are signs of pronounced dehydration. A first-rate dehydration usually requires hospitalization in children.
Rotaviruses are dangerous for children and can lead to life-threatening dehydration, especially in infants and toddlers. The Robert Koch Institute therefore even recommends vaccination with rotaviruses for babies. Children are referred to as high fever from 39 ° C. Temperatures above 41.5 ° C are seriously life-threatening for children, since the body’s own proteins are destroyed. Children fever faster than adults, especially small children. Babies and children tend to develop high fever febrile seizures. Similar to an epileptic seizure, the child loses consciousness during a febrile seizure and twitches all over the body for a few minutes.
A high fever and diarrhea lasting for days can lead to complications in children and therefore require medical attention.

Causes of fever and diarrhea

Feverish diarrheal diseases are usually infectious. The symptoms are often caused by bacteria or viruses, rarely parasites. Bacteria are mostly responsible for the symptoms. salmonellae are transmitted via poultry meat and eggs, for example. They cause watery diarrhea and fever. If you are infected with Shigella the diarrhea is often bloody and associated with abdominal cramps.
Viral infectious people are, for example, by rotavirus and noroviruses caused. Rotaviruses are transmitted via drinking water and from person to person. Infants and toddlers are particularly at risk. The norovirus is highly contagious and causes fever, watery diarrhea, nausea and vomiting.
Less often, parasites are to blame for the infection. Amoebas lead to bloody greenish jelly-like diarrhea and are often associated with long-distance travel. Lamblia occur in warm countries and cause fever and watery diarrhea.

Viruses as the cause of fever and diarrhea

The Norovirus is a highly contagious, insidious virus that causes diarrhea especially in winter. A violent fever can occur with a norovirus infection. However, the complaints often end within 48 hours.
Read more about it at: Norovirus – how dangerous is it?
rotavirus are dangerous for infants and young children. Those affected suffer from fever, diarrhea and vomiting. Proper hygiene can help reduce infections.

Bacteria as the cause of diarrhea and fever

salmonellae are bacteria that are often ingested with food. The warmer it is, the better they reproduce. After hours to a few days, they cause nausea, vomiting, diarrhea and sometimes fever.
In addition to salmonella Campylobacter the most common cause of diarrhea and fever, especially in the summer months. In contrast to Salmonella, these bacteria do not multiply in the food, but they are often ingested through foods such as poultry. Infection causes severe diarrhea, fever, joint and muscle pain.
Next to it is the bacterium Clostridium difficile a resistant intestinal germ that often becomes noticeable after taking antibiotics. Infection with Clostridium difficile causes nausea, fever and diarrhea.

Food poisoning as a cause of fever and diarrhea

Food poisoning is often caused by certain types of bacteria. A salmonellosis arises from salmonella and leads to diarrhea, nausea, vomiting and fever. Fever and vomiting can also be symptoms of food poisoning caused by listeria. One speaks of one listeriosis. If the bacteria spread into organ systems or even the meninges is dangerous and should be treated.
Food poisoning with diarrhea and fever can also be caused by various other bacteria, such as Campylobacter, Yersinia and Shigella.

The diagnosis begins with a thorough one anamnesis. The duration, nature, color of the stool and the frequency of bowel movements are important for the history of diarrhea. The determination of the fever curve, i.e. when the temperature was how high, and the current body temperature are checked. A physical examination with palpation and listening to the abdomen are part of the process. A blood sample is taken to check inflammation parameters in the blood.
Depending on the suspected diagnosis, further examinations such as a colonoscopy, an X-ray of the intestine or other imaging methods can be considered.

Depending on the cause of the discomfort fever and diarrhea, other symptoms may appear. If the condition is food poisoning, nausea, vomiting, stomach cramps and Mucus or blood in the stool added. As a result, dehydration (withdrawal of water) often occurs.
Bacterial infections with Campylobacter also cause Muscle and joint pain.

Suffer from one Flu or cold?
Answer to this 11 short questions and find out if you have the flu or a cold.
Click here for the Test flu

Headaches often occur as Follow the fever and dehydration through the diarrhea. Headaches can be dull or stinging and creeping or sudden. Antipyretic drugs often relieve pain and can alleviate both symptoms. If the headache arises from a lack of fluids, you should make sure to drink a lot. Headaches can also be a direct symptom of infection, such as infection with the Campylobacter bacterium.

Food poisoning and bacterial infection often cause vomiting and diarrhea to occur together. For example, high fever, diarrhea, vomiting and abdominal pain are associated with food poisoning from Salmonella. Campylobacter also leads to the symptoms of nausea, vomiting, diarrhea and fever. The symptoms of diarrhea and vomiting often occur simultaneously and are colloquially often referred to as Abdominal influenza or enteritis.

Joint pain is a less common symptom of illnesses associated with fever and diarrhea. Yersinia are germs that lead to diarrhea. Young children are particularly susceptible to the bacteria. After infection, a complication can be a reactive arthritis arise. This means that joint pain can occur even if symptoms such as diarrhea and fever have already subsided. If you suddenly suffer from joint pain, you should definitely mention previous (diarrhea) infections at the doctor.

Further information on the topic can be found here:

All topics that we have already published under the ENT can be found at: ENT A-Z