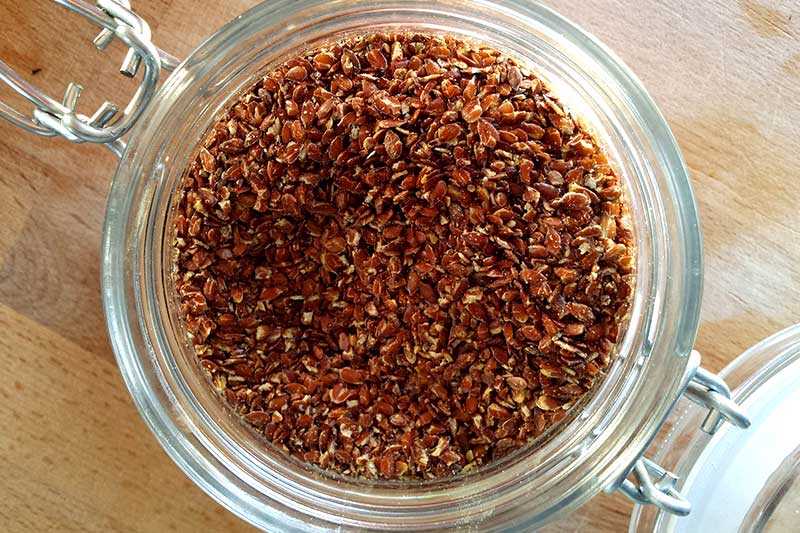 Why should you buy flaxseed flour? Probably only the least of you have ever heard of it. Almond flour or coconut flour is bought for the sake of flavor, whereas flaxseed flour can be considered a local superfood. We’ll tell you what‘s so special about the flaxseed flour and how to use it.

That’s the effect of flaxseed flour

The main argument for the use of flaxseed flour is usually the low percentage of carbohydrates. Thus, the flour is very useful for a low carb diet. In addition, more and more people rely on a gluten-free diet and the flour from flaxseed is also ideally suited for this.

Much more important, however, are the many minerals and vitamins. The valuable ingredients are supplemented with plenty of fiber. This is also the reason why flaxseed flour is recommended for colon cleansing from different sides. Many healthy Omega 3 fatty acids also regulate blood pressure, which also improves the functions of the blood vessels.

Flaxseed is generally considered to be one of the oldest natural remedies for all stomach and intestinal complaints. As if that was not enough, flax seed is said to have an additional anti-cancer effect.

Flax seeds are unfortunately not very digestible. They often pass unchanged through our digestive tract, making the healthy properties of the small seeds obsolete. This is where the advantage of flax seed flour comes in. It has already broken down and can therefore be digested very well and the many important ingredients are very well received by our body in a row.

Those who rely on the power of flaxseed should either resort to flour or ground flaxseed. Whole seeds are unfortunately not so useful for our body.

In the following, we have summarized the nutritional values ​​of flaxseed flour in a table.

If one compared the nutritional value table with that of linseed, then one would recognize that the fat portion reduced, but the portion of the carbohydrates slightly increased. The other values ​​are almost unchanged.

If you want, you can easily make flaxseed flour yourself. You do not really need to buy expensive. Especially if you use it often, the effort is definitely worth it. The flour is not cheap and goes into frequent use. One thing is to say in advance, it necessarily needs a powerful mixer, which also copes with cores. Alternatively, of course, various mills are suitable for making his own flaxseed flour.

The flaxseed simply comes as needed in the blender and is chopped there small. Remains are always hanging on the edge, which is carefully pushed back to the knives. Of course you should meanwhile make the mixer short, so that can not happen. After about 5 minutes, the homemade flaxseed flour is ready and can be used.

However, this is not completely de-oiled flour, but partially de-oiled flaxseed flour. De-oiled meal is made from the press cake after the production of linseed oil. Although it is poorer in calories, but also poorer in nutrients, since these are already in linseed oil.

If you want, you can not only make flaxseed flour yourself, but also use it very well for baking. It is predestined for many low carb recipes. With its slightly nutty taste, the flour also fits wonderfully with most recipes.

There are not so many flaxseed recipes yet. That’s why we have a few general rules of application for you that you definitely can not make a mistake with. Basically, you can take any baking recipe and replace the flour in it with one fifth of flaxseed flour. If it is gluten-free flour, then you can even replace it completely.

Even if you have not worked so often with flaxseed flour, it is quite versatile. The classic among the recipes is a spoonful of flour in the cereal. There is even a separate cure, where you are for a month flaxseed flour with kefir for breakfast, in order to rehabilitate his intestines.

It can also be used in a similar way to chia seeds and fits well into your overnight oats or into the morning smoothie. You can also bake excellent pancakes as well as especially protein-containing bread and rolls made of flaxseed flour. If you want, you can also use the flour for breading and thus replace the breadcrumbs.

In principle, thanks to the flaxseed flour, all baking recipes can either be carbohydrate-reduced or gluten-free. With the application tips given above you can easily adapt proven recipes. Just try a little.

Flax seeds are healthy and good for our digestion. Since the flour made from it makes no difference. In the meantime you can buy flaxseed flour in many supermarkets or drugstores and you do not have to order this online anymore. It is usually cheaper there too. If you want it even cheaper, just do it yourself.

The flour has many important ingredients for our body. In particular, the intestinal health should be promoted by regular intake. Last but not least, the flaxseed flour is also suitable for modern diets such as low carb or a gluten-free diet.

Previous favorite recipes can be easily adapted. Mostly you can not completely replace the flour used with flaxseed flour, but it can be mixed in wonderfully, without the baking result underneath le >