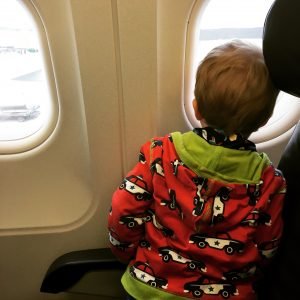 We flew with all of the children relatively early and thought we were doing everything right, which is why it always worked without problems, our grown-ups have always loved to fly and are now completely routine, they stand up in the security gates with their arms raised and know that they are Get drinks after the controls. So we arrogantly imagined that it was simply a question of education, if you fly early with the children, it was all very relaxed. And then our number 3 came

Our little one thinks flying is stupid

The first flight he was about 6 months old. When he was boarding, he made it clear what he thought of all this crap and that a baby seat was not an appropriate place to stay. In general, he found the whole thing out of the question and only roared and slept at some point in my arm, to the dismay of the woman next door, who found the white noise "shooch" exhausting. As a baby, the little boy also found driving very stupid, at least in the baby seat, it got better in the Maxi-Cosi Pebble. We found the roughly 1:50 flight a bit grueling. In addition, we were actually quite well prepared, nose drops before boarding so that the nose is definitely free and then milk at the start to help balance the pressure. The return flight was not really better. His big brother was mostly already in deep sleep when we were in the air and we already had flights where two sleeping children blocked the window seats because they immediately slept. The big one was so excited before his first flight at 2.5 that he slept before we took off. The smallest preferred to roar. 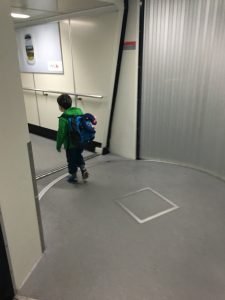 The next flight at 1.5 years was not that much better. He roared and wept and raged because he found it unacceptable to stay in the seat. Distractions failed miserably. The return flight was a bit better, since the plane had no gangway, but we got on the stairs at the tarmac and he could see that he climbs into a "gackgack". However, the enthusiasm only lasted very briefly. This summer, shortly before his 2nd birthday, we flew 3 times in 9 days, to London, from London to Edinburgh and then from London to home. It really got better from flight to flight.

Now he is 2 and we flew again and now he found it really good except for a bit of grumbling sit stay in between. He stayed awake the whole flight, eating, talking and looking out the window. We hope that flying with him is going well.

Flying with children – just like children on a plane 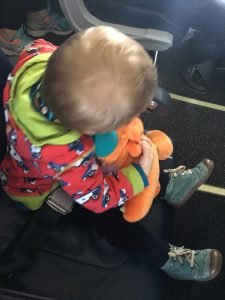 Under 2 you have to book and pay for a seat separately. Most of the time, this can only be done by phone and not online. The child then needs a baby seat with aircraft approval (that’s why we had the Maxi-Cosi Pebble). Alternatively, it must be secured with the loop belt, which does not really protect the baby, but others from flying babies in turbulence. According to experts, there is a high risk of injury in the event of an emergency landing. 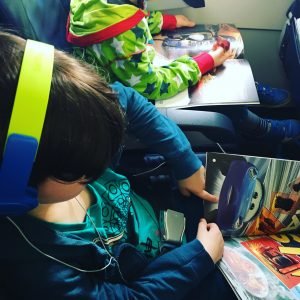 We try that Children up the flight doesn’t get too boring. The machines on short distances are not very suitable for moving. Before the start there are nasal drops, you shouldn’t fly with very cold children, not with very sick ones anyway. From my own experience I can say that when I had a cold with a runny nose I got such an earache that I could have cried. And I was grown up there.

The children can usually order a snack and a drink on board. We also have snacks with us. I always buy sticker books beforehand, which they only get on the flight. This time the big one also brought the Kindle with books. Both guys also have old iPhones from us with radio plays on them. In theory, they also have their tablets (Amazon Fire) with them, but so far they have never been needed on flights, time goes by. There are also little travel games or puzzles. I also pay attention to comfortable clothing with an onion look. They have cuddly toys and neck pillows with them anyway. 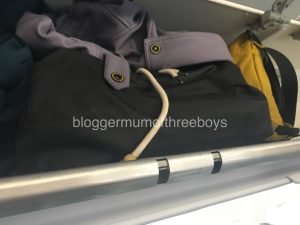 Fly easily with a buggy

We also always have our Babyzen Yoyo + Buggy with us, as it is hand luggage size (always check with your own airline, we could always take it with you), you can push the toddler at the airport to the gate or the airplane door, fold it in and take it in the cabin, it fits in the luggage compartments. Take it with you after landing and fold it out again directly at the aircraft door. Before that, we often ran after the buggy at the airport and had to drag or catch a child.

We also survived the return flight well, the little one also likes to fly now. All three children were allowed to go to the airport magazine choose and then watch on board.

What are your tips for relaxed flights with children?