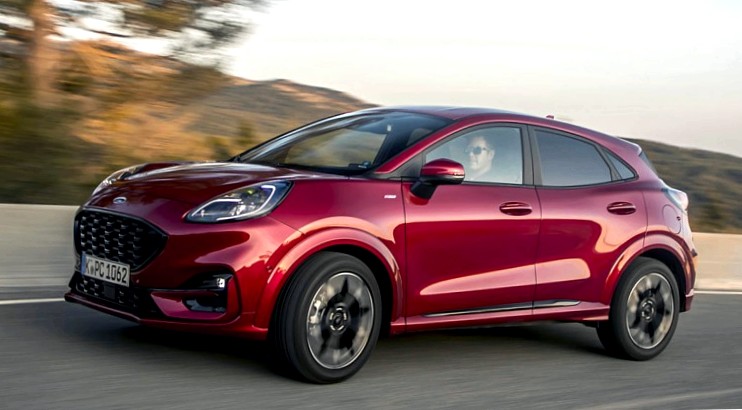 Instead of being a sports coupe, the ford puma is now an SUV.

Old name, new car. Instead of being a sports coupe, the ford puma is now an SUV. And a very special one at that, because it contains ideas that were previously not to be found in this class. the puma rolls into dealerships in march, starting at 23.150 euros.

To let such an easy-to-pronounce and internationally applicable name as puma go by the wayside so easily? No, that was never an option for the product planners at ford. Even though the modern puma of today has virtually nothing to do with its namesake from the 1990s, it still has a lot in common with its predecessor. Back then, the puma was a small sports coupe. But a model like this wouldn’t win a pot of gold in today’s compact B-segment.

Small SUVs and crossovers, on the other hand, are very much in vogue. And that’s exactly what the new puma was designed for. However, ford is not the first to think of this. More than a dozen competitor models are already on the market. Nevertheless, the cologne-based company is extremely confident that the puma will be a success: "We combine good design with the best package in the class," says the head of the series, sigurd limbach. The 4.19-meter short puma shares the B2 architecture with the fiesta, but has a 9.5-centimeter longer wheelbase. This is especially good for passengers in the back seat. You enjoy ample legroom.

But the big surprise is literally behind you. The developers are particularly proud of the puma’s unique functionality. Not only does the trunk hold 456 liters, 164 more than the fiesta, making it the segment leader, the small SUV also has what is known as a "mega box. It’s under the load floor. ford has packed a deep, rectangular plastic tub (volume: 81 liters) where the spare-wheel well would otherwise be. Large plants, for example, can be transported upright, dirty rubber boots without any problems. the box also has a drainage opening, so it could even be easily cleaned with a water hose.

And these are not the only clever ideas that the developers have brought to the puma. A sensor-controlled tailgate or massage seats are available on request. And who hasn’t been annoyed by an ugly stain on the seat upholstery and tried to remedy the mishap with a brush and cleaning agents?? With more or less bad results. In the puma, the covers can be zipped off and thrown in the washing machine. Another advantage: if you want to change to a different upholstery color after a few years, you can do so too.

The puma is also very modern behind the three-spoke steering wheel, which is equipped with various function buttons. It’s ford’s first european car with virtual digital display. The displays can be configured in different configurations and are easy to read. It’s nice, though, that the designers have kept it to classic knobs and buttons for operating key functions like volume and climate control. Because not everything in today’s cars has to be controlled with a finger on the display. Older drivers in particular, who didn’t grow up with smartphones, will welcome this.

When the puma is launched in march, the engine portfolio will initially comprise three-cylinder gasoline engines with a displacement of 1.0 liter and 92 kW / 125 hp and 114 kW / 155 hp respectively. Both units are mild hybrids with 48-volt technology. For the 155-hp version, ford promises a 15 percent improvement in efficiency and specifies fuel consumption (according to WLTP) of just 5.6 l/100 km, which corresponds to CO2 emissions of 127 g/km. In addition, the one-liter gasoline engine is also available without electrification, also with 92 kw / 125 hp. The only diesel (88 kw / 120 hp) in the range is from the focus and will arrive in may 2020.

The three-cylinder ecoboost gasoline engine made a convincing first test drive, delivering a throaty sound, pleasant agility and good power from low revs. Not least because the generator’s electric assistance sends up to 50 percent more torque to the drive wheels – just above idling speed. As standard, the engine is coupled with a manual six-speed transmission. Shifts easily and precisely in the usual way. ford also plans to offer a 7-speed dual-clutch transmission for the 125-hp version without mild hybrid later this year.

The good handling should not go unmentioned. Not surprisingly, the track of the puma has been widened by almost six centimeters compared with the fiesta. A strong pound. Ford already enjoys an excellent reputation in terms of chassis/driving dynamics, and has made a name for itself over many generations, particularly in the compact class. For those who want to individualize the driving characteristics or adapt them to their different needs, a driving mode switch is available. It activates the "normal" modes, "eco", "sport", "slippery" and "dirt road".

The price of the puma starts at 23.150 euro. There are four "Titanium" equipment lines, "titanium X", "ST-line" and "ST-line X, the latter being exclusively for the two mild hybrids. Here the price starts at 26.900 euro.