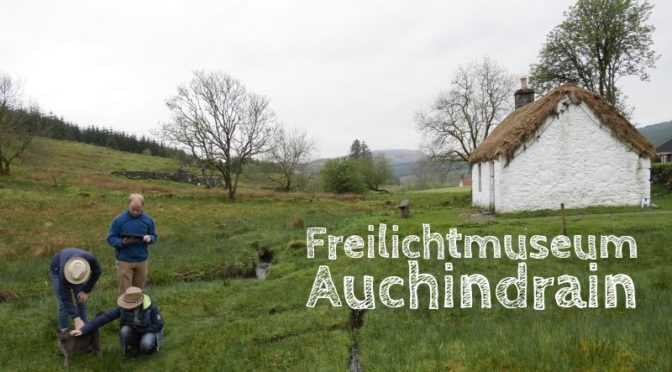 Freilichtmuseum Auchindrain: Excursion into the past of the Highlands

The Auchindrain Township is a small open-air museum very close to the town of Inveraray in Scotland. On the way to the West Coast, to Oban or to the Hebrides, the authentic Highland settlement is a wonderful, highly recommended destination. We visited the museum with children – our report.

Our visit to the open-air museum Auchindrain was part of our Scotland tour in May 2018: “Scottish Islands: Family Holidays on Islay, Jura, Mull and Co”. We were traveling as a family of four, our boys were at the time 13 and 11 years old. 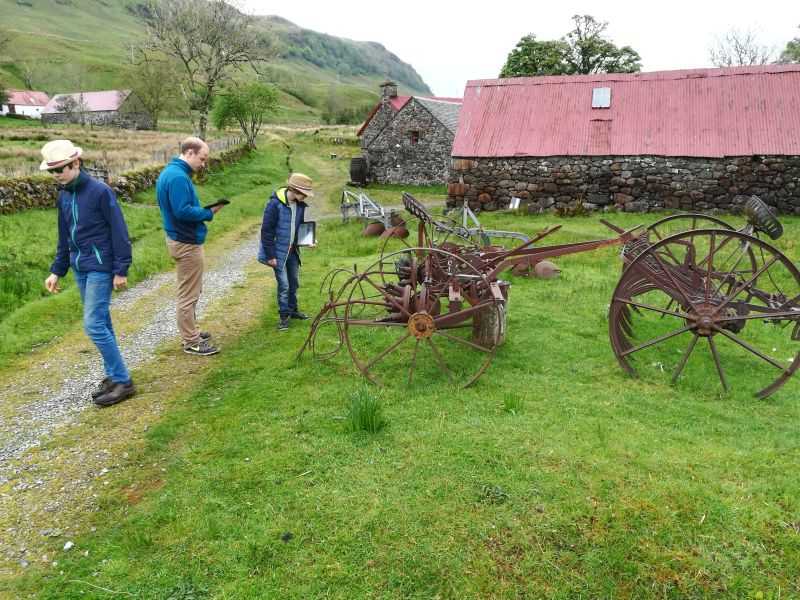 Well worth a trip to the Auchindrain open-air museum?

We asked ourselves this question for a long time and, unfortunately, answered “probably not” on our first two trips to Scotland. In fact, Auchindrain has some competition from nearby destinations.

Only ten kilometers and on the well-developed highway A83 only about ten minutes drive to the pretty little town of Inveraray, which scores with a picture-book castle and the experientially prepared Inveraray Jail. Also within easy reach is the famous Kilmartin Valley with all its prehistoric sights. If you’re heading for Oban from Inveraray, you might prefer to stay at Loch Awe near Kilchurn Castle and St. Conan’s Kirk, which is also worth seeing.

Auchindrain falls down the back slightly, and we did it as I said before the third attempt. But a visit is absolutely worth it! Also and especially with children. “Due to its exceptional degree of conservation Auchindrain is considered the most valuable preserved museum for the documentation of historic settlements in Scotland,” says the Wikipedia article, citing the Royal Commission on Ancient and Historical Monuments of Scotland.

And by the way, we had a lot of fun during the visit. 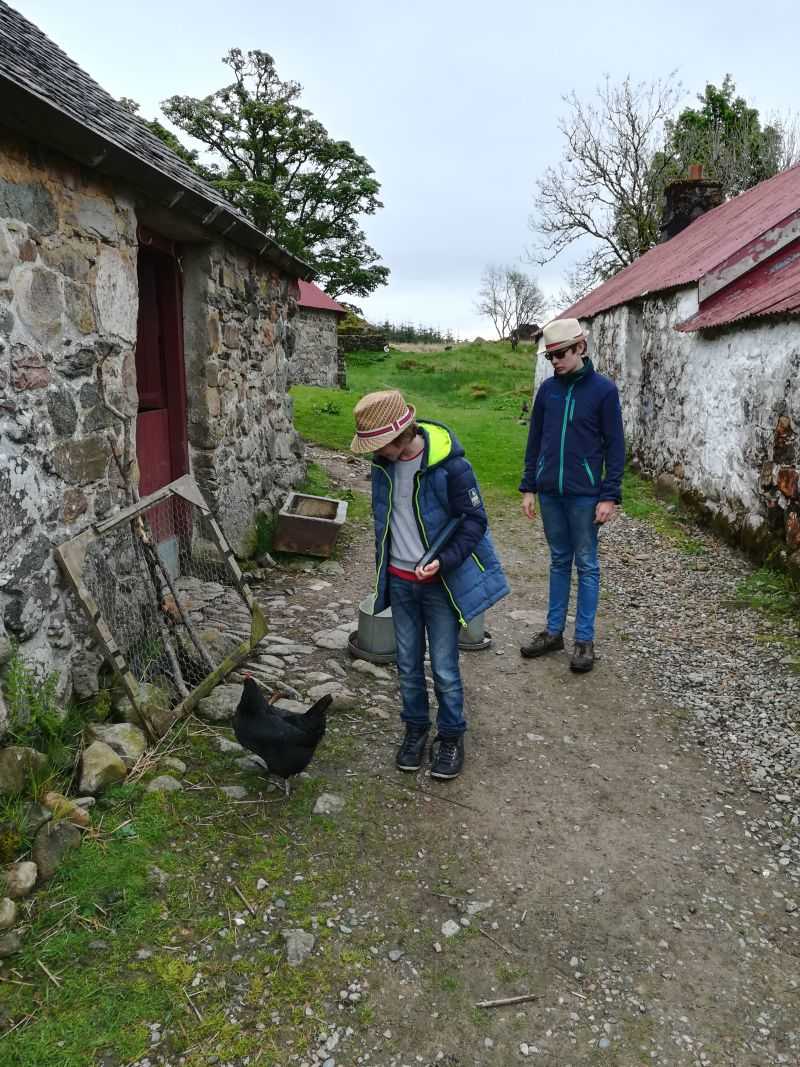 The boys make acquaintance with the only remaining inhabitants of Auchindrain.

Auchindrain – how the hell do you pronounce that?

The first hurdle one faces when suggesting a trip to the family is the correct pronunciation of the place name. To begin with, we practiced with the young man at the ticket counter, and only two family members were able to produce something approachable.

The name is Gaelic, of course. Translated, it means something like “blackthorn field”. The traditional spelling was Achadh at Droighinn.

The “ch” is soft, as in “milk”. The word is four syllables, the emphasis is on the third. The initial letter is not a clear A, rather a Danish Å. So, now let’s try that: A-chen-THREE-en. Of course with Scottish rolled rrrr. And now all!

Of course everyone in the area knows where to go if you ask for the way to Otschndreyn like the English. 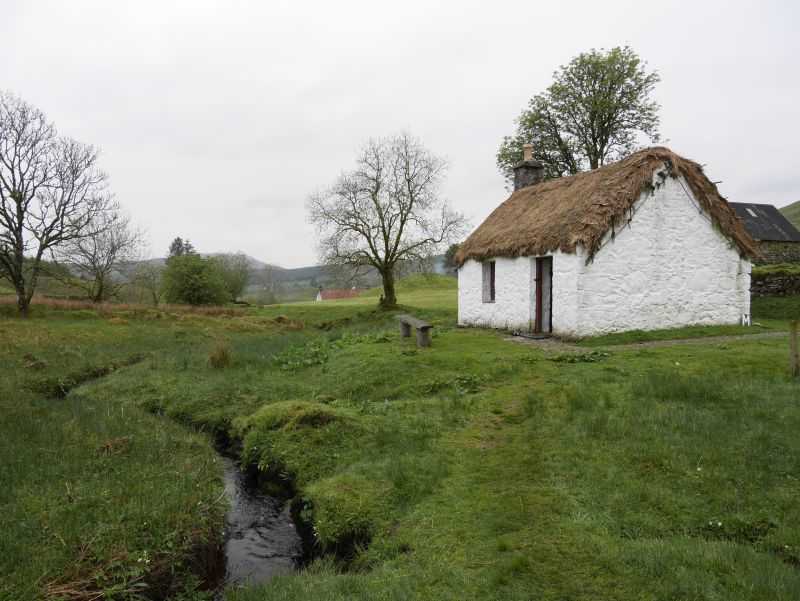 Bell a’Phuill’s house is probably the prettiest motif in the open-air museum.

What is the open-air museum Auchindrain?

The special feature of the open-air museum is that it is an authentic settlement that “naturally has grown” here. No buildings were removed in other villages and moved here. Auchindrain used to be a typical small village, which was fortunate enough to open in 1975 as an open-air museum.

First documented mention of the settlement in the 17th century, but it is believed that they existed before. The Duke of Argyll, who resides in the nearby castle of Inveraray, is called a landowner in 1776. Between 1790 and 1840 he made the small settlement to his favorite project, with which he (including Queen Victoria) showed how exemplary he cared for his subjects. He made sure that the mud huts were replaced by stone houses. So Auchindrain got the typical face of a village of the Scottish Highlands in the 19th century, which kept it until the 20th and 21st.

Of the Highland Clearances Auchindrain remained spared, but the rural exodus hit anyway. In 1937, only one resident lived in the village: Eddie MacCallum. After his death in 1963, the idea soon arose to open the anachronism as a museum. 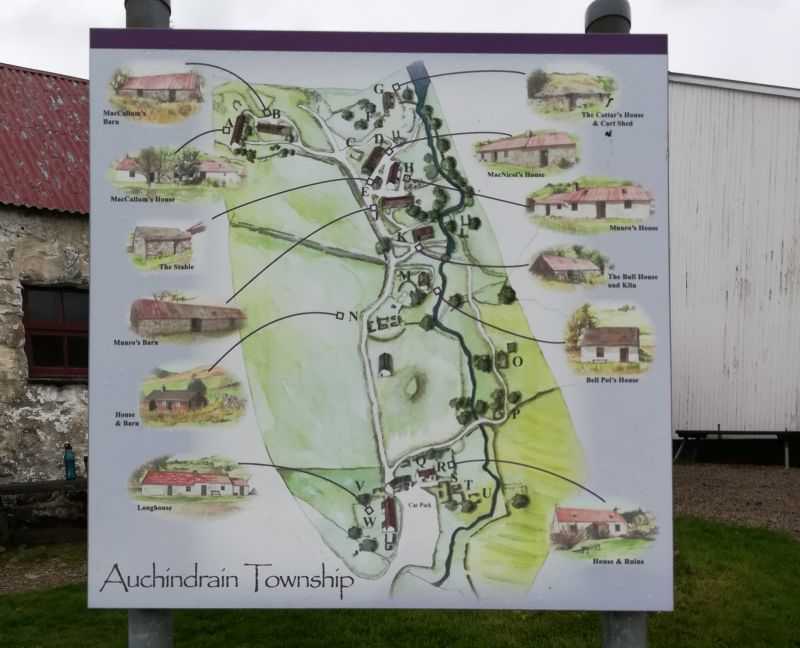 The overview map at the entrance of the museum shows the location of the original village.

What do you get to see in the Freilichtmuseum Auchindrain??

Today, the small museum in the Scottish periphery is a place of learning and a destination for the latest technology. The visit to the settlement is supported by multimedia: Each visitor receives a tablet, which plays – also in German – at each point of the tour the related information. 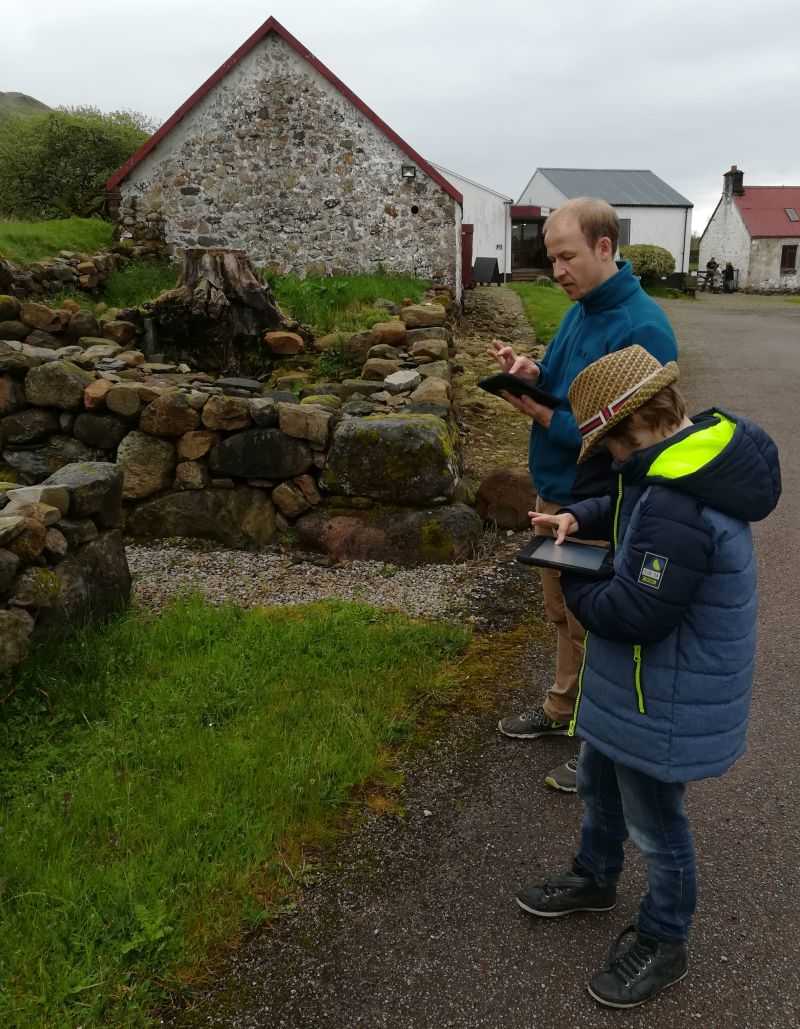 The Beusch in the open-air museum combines old and new.

Twelve buildings surround the site, plus several ruins. The houses are scattered over the rolling hilltop and connected to a clean landscaped walkway. Not all can be viewed from the inside, but most are already.

The aim is to give visitors an impression of everyday life in a highland village in the 19th century. Accordingly also vegetable gardens and some fields are cultivated. Free-range chickens complete the picture.

The courtyard at the far left is that of the last remaining inhabitant. He is left in the original condition. Moss grows on the sofa and bed, but otherwise the decor looks as if old Eddie just left his antiquated flat for a short walk. 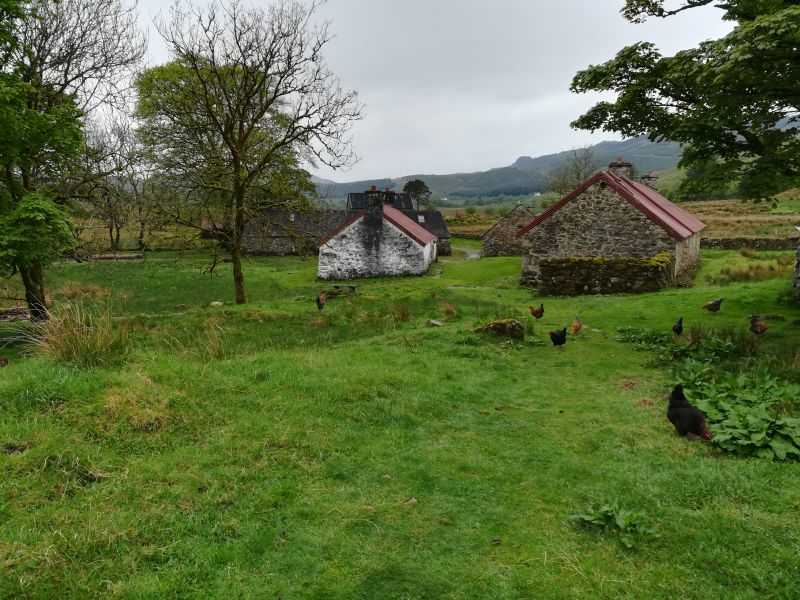 Our highlights in the Auchindrain open-air museum

For me, the most interesting thing about visiting the open-air museum is to really understand under what primitive and exhausting circumstances the people here wrestled with the land in order to get full. Since I myself came from a peasant family and from the time of the 19th century had some comparative values ​​- even from German open-air museums – that was an enlightening insight.

I also find the story of Bell a’Phuill, who lived as a “wise woman” in the smallest, but always decently whitewashed and well-laid Kate on the spot. Even though she, as the unmarried mother of a son, did not live up to the moral standards of Victorian Britain, she enjoyed the respect of the community and was supplied with tea and coal by the Duke of Argyll. 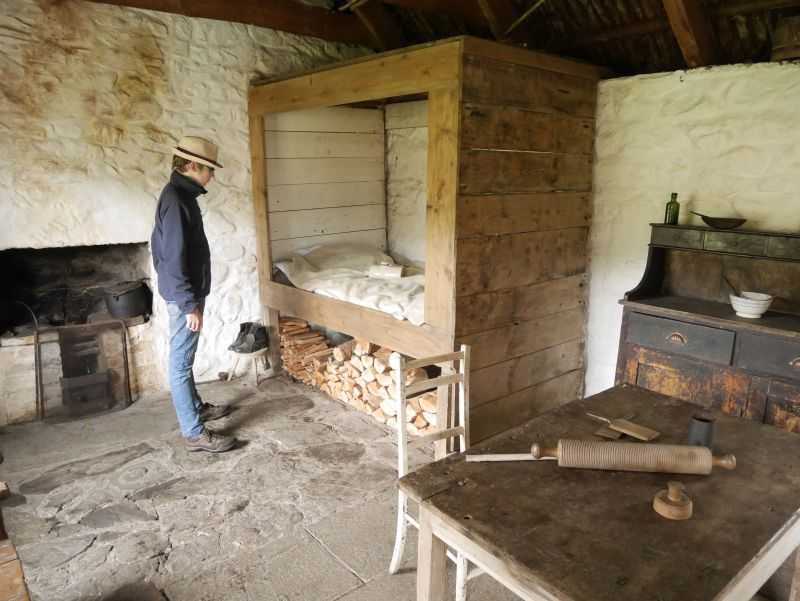 Cozy? Janis praises his own bed in the warm nursery.

The guys are, of course, fascinated by the technology of the tablet. As with a divining rod they run to the points where the location detection automatically fades in texts, maps and small video sequences. The lyrics themselves are rather boring, and we parents have to force them a little to their happiness in order to actively think and draw their own conclusions.

By far the biggest highlight for children, of course, was the museum cat, who barked us up in front of Bell’s hut and allowed himself to be stroked extensively. Her name is the Gaelic expression for “black cat” – we practiced that with the gentleman at the ticket counter, but in vain … 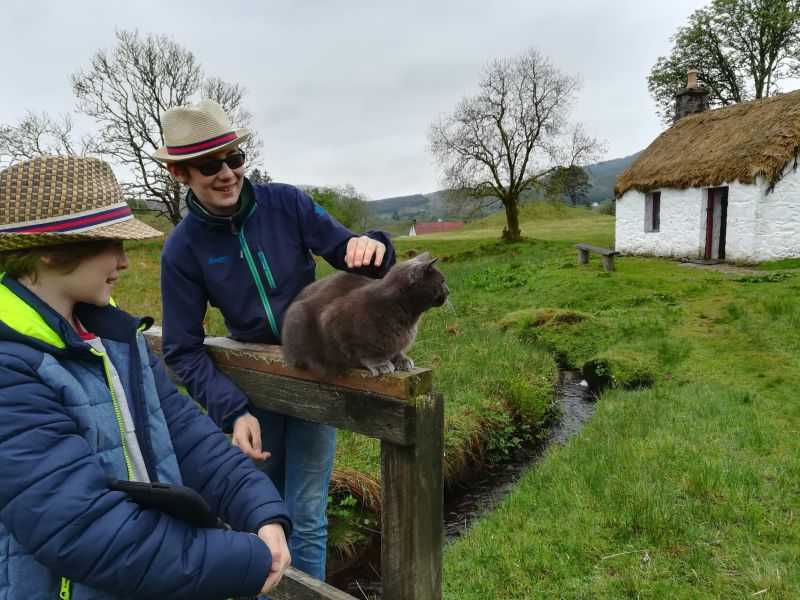 The true main attraction of the open-air museum.

Visitor Information: Admission, opening hours and so on

The Auchindrain Open Air Museum is located between Inveraray and Furnace just off the A83 towards Kintyre and is easy to find. There is a large enough, free parking lot.

The museum is open daily from the beginning of April to the end of October from 10 am to 5 pm (restricted in winter on weekdays and without tablets, but very reduced admission).

Adults pay 8 pounds, children from 5 to 17 years 5.50 pounds. Curiously, there is only 20 percent family discount if both parents are present and bring more than one child.

More information in English can be found on the (fancy but incredibly slow) homepage of the museum. There you can even do the whole tablet tour online, I just see. 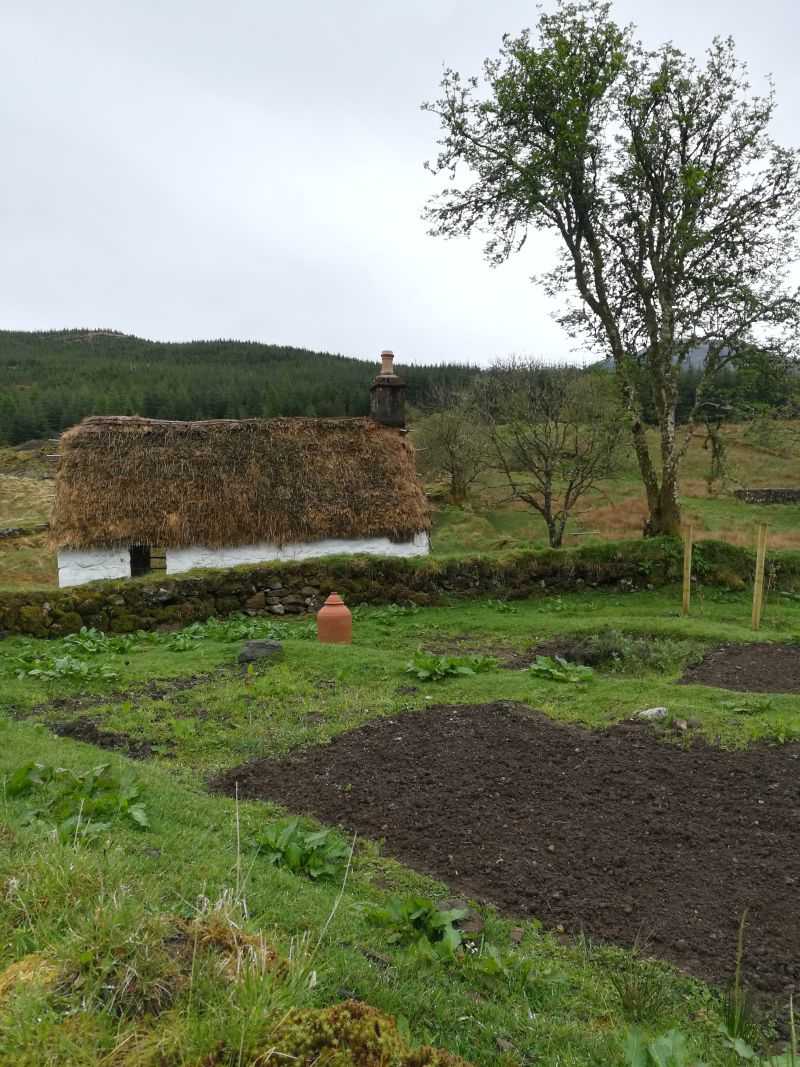 The vegetable garden behind the house.

I have summarized and listed over 30 reviews of destinations and travel in Scotland with children in general:

In May 2019 is the Travel Guide “Scotland with children. 66 hiking and discovery tours in the Highlands and on the islands “ I wrote together with Stefanie Holtkamp for Naturzeit-Verlag. 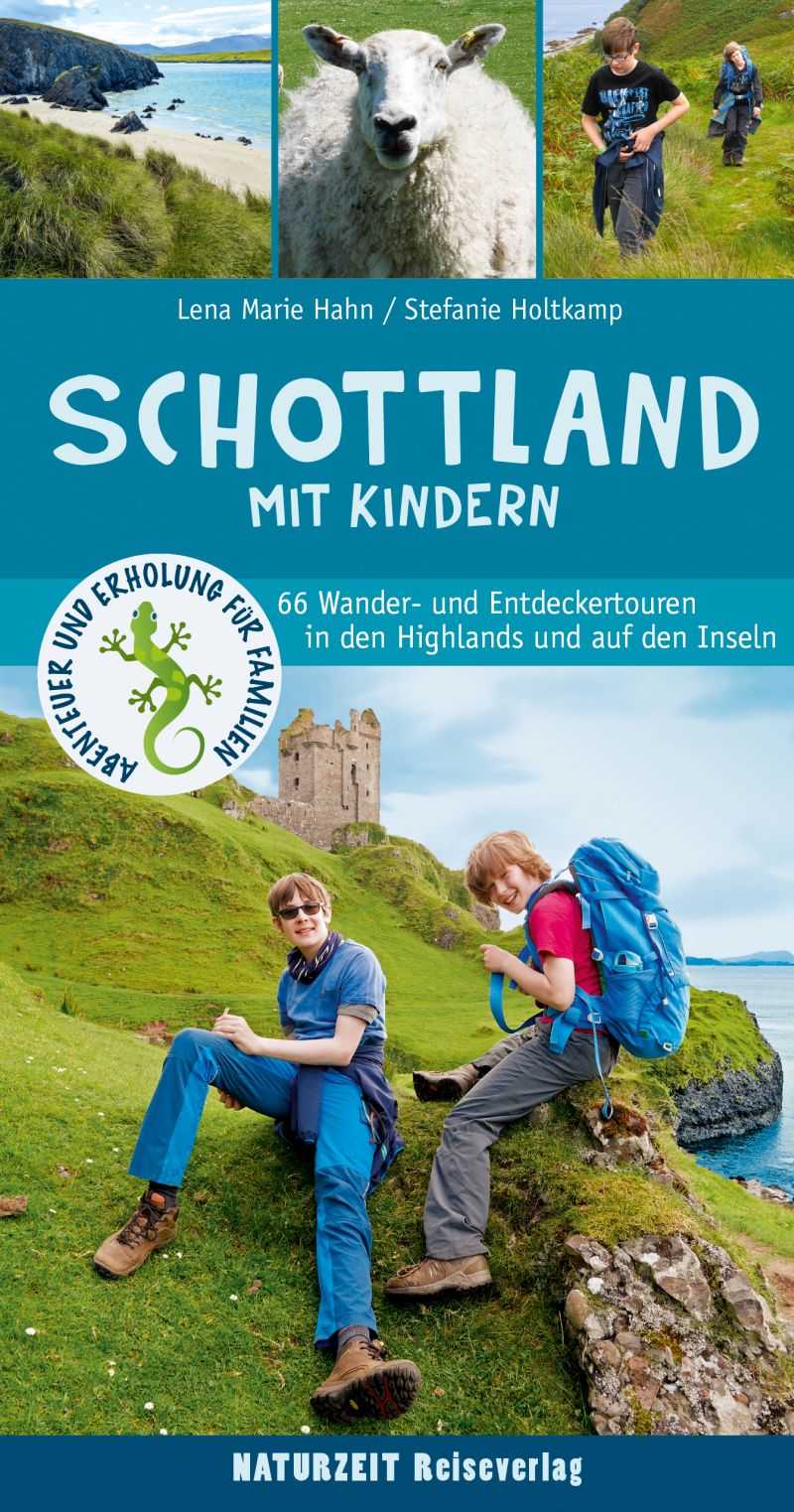 You can order our guide conveniently with a few clicks on Amazon * or anywhere in the bookstore.

Transparency Note: We were in the context of a research tour for our family travel guide in the Auchindrain open-air museum and therefore did not pay admission. Of course, our opinion does not influence that, we are professionals after all.