This article addresses the following questions:

Why do children need friendships with other children?

Contacts with peers, often referred to in science as "peers", are very important for children, as numerous scientists from areas such as education and psychology repeatedly emphasize. Because the relationship between two or more children is completely different from the relationship between a child and an adult. For a child, an adult is almost always an authority figure who knows a lot, can teach the child a lot, and whose word the child has to obey. So there is a strong imbalance in the relationship. This is not the case for people of the same age, here the conditions are somewhat even. With peers can children learn to assert yourself, to convince other people, to compromise and to agree. If a child is ahead of the other in a certain skill, he can teach it to his playmate and thus acquire the first didactic skills. They also compare themselves with their friends, which usually has a positive effect on their own self-image: While they are always inferior to adults, this is different in situations with peers. They learn that sometimes they have to give in, but sometimes they can be convincing or assertive.

On the other hand, conflicts between adults and children often turn out in favor of the children: parents and other adults like to give in when they disagree with their children and when it comes to decisions about which game to play, these are almost there always in the hands of the child. With friendships, on the other hand, it is different: peers do not simply give in and may want to play a different game, and the social and cognitive skills required to solve such a situation are promoted much more in exchange with peers than in unbalanced exchange with adults.

When dealing with peers, children are also the easiest to learn to put themselves in other people’s shoes and to respect the wishes of others, because if you behave disrespectfully or too selfishly, you will lose your friends. 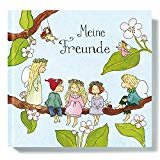 How do children choose their friends??

Nice in young children and babies are found to be more intimate with peers who have seen them more often than with toddlers or babies they do not know.

In addition to familiarity, this also plays a role in young children Age and gender plays an important role in the choice of friends. Even two-year-olds prefer to play with children of the same sex, which could also be due to the fact that friendship concepts between girls and boys are often different.

Boys often have large groups of friends in which group cohesion plays an important role. Girls, on the other hand, often have intensive two-way relationships with one or more “best friends”, but not all of them belong to a group.

The characteristics by which children choose their friendships differ in the different phases of life: In kindergarten age, children are friends with the children they see most often, for example when the mothers are friends or the children live in the same neighborhood. Around primary school age, children start to choose their friends based on their interests: this is particularly about raving about horses or having the same favorite series.

Some elementary school friendships last into adolescence and adulthood, even if it is very likely that the children will develop strongly. However, when new friendships are built up in youth, it is now more a matter of differentiating oneself, especially from the adult world, which teenage children often do not feel understood. In this phase, friends become very important, often the most important, caregivers.

Friendship among children: Even young children can make friends?

Nobody will deny that children need friends; the only question that often arises is when children should learn to deal with peers and when it is too early because the children are still busy getting to know themselves, their environment and their parents.

For example, crèches are often criticized for separating children from their primary caregivers, i.e. their parents, too early. Scientists ask themselves whether toddlers already benefit from dealing with each other, whether they do not really perceive each other at all, or whether contacts with their peers might even harm them.

Developmental psychology and early childhood research have found some interesting answers to these questions. According to studies, toddlers are interested in each other, which is shown by the fact that they react to each other with facial expressions, gestures and sounds. Sometimes they also fight over toys – also a clear reaction to one another. In larger groups, however, it can actually happen that a toddler is a little overwhelmed by all the other children. The interaction is most intense when only two small children are together. They then communicate through posture, facial expressions, gestures and in particular respond to each other by imitating each other.

It is particularly exciting that toddlers communicate differently with peers than with adults: gestures and touches are more aimed at other children, with adults they are more likely to communicate through sounds and facial expressions. Sometimes it seems as if toddlers do not have access to adults with certain attempts to make contact, but to peers. For example, when they laugh, make incomprehensible sounds, contort and imitate each other.

Cohesion and love, strife and jealousy: how strongly siblings shape each other?

The relationship between siblings is very special: hardly anyone sees a child in their childhood more often than their siblings. They live in one household, share mother and father and often much more. There are often fights for the favor and attention of parents.

Siblings are contacts that, at least in childhood, cannot be compared to parents or friends: children need more social and emotional skills to cope with their brothers and sisters than with their parents. Because while parents often give in, siblings are just as stubborn and have their own heads as well. Although this is also the case with friends, children are often more ruthless or disrespectful towards siblings than towards their friends, because friends could terminate their friendship, but siblings remain siblings. A break in contact is not possible under normal circumstances in childhood.

The relationship with the siblings is therefore often problematic, characterized by arguments and hatred. However, the positive feelings towards siblings are often just as intense. When parents quarrel or decide something that hits the children hard, such as moving house or being banned from owning a pet, they have one or more allies in their brothers or sisters who have the same problem. They can be sad or angry together and are not alone with their feelings, or maybe even manage to persuade their parents to buy a dog.

Often, especially among sisters, it is also found that a teenage sister is a greater role model for the younger than the mother. Many ten-year-olds love their big sister, want to be like them, fight for their recognition and try to imitate them and participate in their lives.

Of course, parents want their children to have a close, harmonious relationship. That is why many people think about the most harmonious constellation or the ideal age gap. Scientists are often of the opinion that, on the one hand, the closeness, but on the other hand the potential for conflict, the greater the smaller the age gap between the siblings. The most harmonious constellation is said to be that of a big brother with a little sister: he has the need to protect his little sister and can act as the stronger, she relies on her big brother and feels safe. But as so often, such results from studies can never be generalized, too many factors influence the relationship between siblings. Last but not least, the behavior of the parents plays an important role.