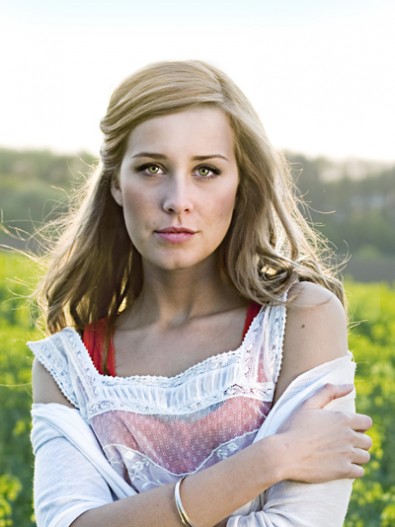 The Essen actress Clara Dolny is an integral part of the legendary television series »Lindenstrasse«. For the past three years she has been seen on Sundays in the role of Josephine Stadler. Although the 22-year-old travels a lot due to her job, she only really feels at home in Kray-Leithe.

Clara first drew attention to herself in 2005 at the Grillo Theater in a role in the play »Homestories«. At that time, the project was awarded the "Essen’s Best" award. During this time, an agency discovered her acting talent and ultimately placed her in the successful soap "Lindenstrasse". Today the Essener, who graduated from high school in Stoppenberg in 2010, is a sought-after actress. In addition to her work on the theater and on the ARD, she has already been seen in various cinema and short films.

When did you discover acting for you??

If you asked my family, you would be too Listen I have always enjoyed playing shows since childhood. At the beginning, I didn’t really plan to become an actress. I can still remember that as a child always wanted to be a bicycle repairer. Back then I was always with my father in a bike shop where I thought the boys were so cool that I wanted to do that too. (laughs) At first I played a lot of school theater, but I got really excited about acting when I was 13 when I took a theater course at the Steeler Grend.

How did things go for you afterwards??

A little later I happened to get a flyer for the casting of "Homestories" by director and author Nuran David Calis at the Grillo Theater. So I went with a friend completely spontaneously, without preparing myself for it. This made me not at all excited and when asked if I had prepared something, I said "Nope!" And should just improvise freely. At the casting, I also smashed an old children’s song on request, although I actually can’t really sing. To my surprise, the director found my nonchalance and that I wasn’t ashamed of anything, so I was actually taken. Back then, the "homestories" wrote a huge success story and we were honored, among other things, at "Essens Beste". With the same ensemble, we then staged the piece »Love«. It was then that I seriously thought for the first time that I would like to do acting.

And how did you end up on "Lindenstrasse"??

After my premiere of "Homestories" I was approached by an acting agency to see if I would like to do something in the field of film and television. So of course I didn’t say no and we created a card index with videos and photos. At some point an inquiry came from the "Lindenstrasse" and me was invited to two auditions. Back then I was totally excited because I really wanted to. But it took ages to get an answer. At Christmas 2007 the promise came. I was surprised and overjoyed, although it wasn’t really clear to me at the time what that meant.

How much of your role as Josephine Stadler is in you personally?

For me, the role is like a home. It is not very far from me, although "Josi" is already different from me. In addition, she is a problem child, slips quickly, which would rather not happen to me. But she is very cheeky and cheeky, I could sometimes see something of that in real life. If I ever get out, I will miss the role very much!

If you compare the areas of soap, film and theater with each other, what is most important to you?

You can hardly compare that. I would say that the soap is the most comfortable because you are in a role and you just know everyone on the set. So far, I find film most exciting because you can work in a completely new team in one fell swoop in a relatively short time and you end up getting a lot of editing. I find theater the most exhausting, but also the most valuable, because I just like to improvise and you dive into another world. A short while ago I saw such a great piece on the Essen studio stage that I was incredibly touched. I immediately felt like playing theater myself.

Acting is an absolute dream job for many young people. Is this job really as nice as how many people imagine it??

I like the job very much. Nevertheless, acting is a normal job and it sounds much nicer than it is. You don’t walk the red carpet every day, you often have to work hard. Since »Lindenstraße« is not a daily broadcast, I am not in front of the camera every day, but also have time for other things. For example, I was in Australia about three months ago about a year ago or did an internship as a midwife. I have now also enrolled in the study of social work because I love working with children and would like to work as a dance teacher later.

Does that mean that you don’t want to continue working as an actress at all??

Yes, definitely. But I find so many things exciting and just enjoy that I currently have so much space for it. Of course I would love to work full-time as an actress, but not at any cost. At the moment I don’t really want to go to a drama school because your personality is often tweaked there. Overall, I prefer to concentrate on life rather than just work.

What would you give young people who also dream of becoming an actor??

I can only recommend trying everything. When it comes to acting, there are youth theater groups to test whether it’s fun. If someone just wants to do the job to become famous, that’s definitely the wrong motive. You really have to like acting and be totally absorbed in it. I also think that you won’t last long otherwise. Therefore, you should always keep a realistic look.

Although you shoot regularly in Cologne, you still live in Essen. What do you like about the city??

Overall, I think that you can only appreciate food if you really grew up here. Kray-Leithe is my home. Everywhere in the city I know beautiful corners, for example I am incredibly fond of the Ruhr. Even though I will probably soon follow love and move to Frankfurt, I always remain very emotionally connected to food. In addition, the Grillo Theater is something very special for me personally, because it all started here for me. A magical place.