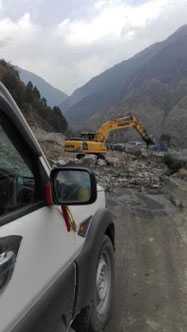 From Pokhara to Kagbeni – The beginning of a great adventure

We made it true – one of my biggest dreams. Since I live in Nepal I had a longing goal. Upper Mustang. This feeling that I have to go there last year has strengthened during our tour to Muktinath. We were then two days in Kagbeni, the entrance to the mystic kingdom of Mustang, and every night I looked wistfully into the valley of the Kali Gandaki. I really wanted to go there. And now it was finally time.

Three months of planning and finally the time has come

My mother visited us again from Germany, and with another friend of hers our little group was complete. We planned for four months and the anticipation had increased immeasurably. The Upper Mustang area can only be visited by a guide, and since it can be very cold up there in March, we also decided to hire Porter to take our winter clothes with us. To enter Upper Mustang you also need a special permit. We were very lucky, Gisa arrived one day before we left and Dil, the owner of the trekking agency with whom we planned everything, just managed to organize our permits.

As far as Pokhara we were on the regular tourist bus, from there it should continue in the jeep. Normally you fly to Jomsom and then start walking from there, but as I am terribly struck by Nepalese domestic fear of flying >

The road is much better now – the way to Ghasa

After we had done the last errands in the evening in Pokhara and were now well equipped, it started early the next morning. Our plan was actually to drive to Kalopani. Up to here it is only about 120 kilometers, but because the road conditions are so bad, you need a day and a good day. Although there are also buses in one go through to Jomsom, but we wanted to have our bones still quite to be able to walk … I already knew that the road is very bad and it is neatly jerky, but I was told she was at least a little better now than it was in October. In the hotel, however, came the additional information: in some places is still being built, it may be that you have to wait.

Until Beni everything was great, we made good progress and were all happy cheers. After a delicious lunch, we continued on the smaller street. Of better, but no question, the slope was even worse than five months ago. In many places the excavators had dug up the sides to create a wider swath in the long term and the villages on the right and left looked totally devastated. It bounced neatly and I think at that moment everyone in the car started cursing me for my fear of flying.

The first few hours we were lucky, but after some time it hit us – the road was closed, because the excavators were working. Our driver tried to figure out how long it would take, but the only information he got was: long. And that means nothing good in Nepal. After half an hour we had a big pig again – an army transport came from down the street and had to go through, and there the excavator had to dig faster. All in all, we were stuck five times, sometimes only ten minutes, sometimes over an hour. Overall, this has delayed our trip so much that it was dark and we had to continue at night on the bad road. And at the latest, I also started to think that a plane might have been the better choice.

After catching the night, we drove upwards on tight serpentines for half an hour. I was sitting right and could look directly into the black abyss next to me – not a nice experience. When we arrived in the next town Ghasa, we all unanimously decided to go to the next guesthouse, which we see and not another meter to drive. We even found a very nice and then fell to bed tired after a delicious Dal Bhat. We did not do anything, but the effort to keep up in the jerking and bouncing jeep was not to be underestimated. And then came the tension of the last half hour in the dark. Anyway, we were all looking forward to our bed.

From Ghasa to Kagbeni

The next morning we went on for a delicious breakfast – and also first on with a bit of a jerk. Only after Kagbeni was the road then eventually better, but only a little. From there, the first big giants of the Himalayas showed themselves: the Daulaughiri and the Nilgiri. This is where the valley of the Kali Gandaki River is the deepest valley in the world, the difference between the mountain peaks and the bottom of the valley is more than 5500m. Truly an impressive place. The climate here is already significantly different than even less kilometers before, it is getting drier and the landscape is getting barren.

In Marpha we then had a lunch break and a long walk. We were there at the beginning of March still very early in the season, so many shops and hotels were still closed. So it was a very different experience for me than the last time in the high season, when it was very busy. After a short climb to the monastery with a wonderful view we went back and after a quick lunch we continued to the last part to Jomsom, where we were to meet our porters.

Dil was still very close to getting our permits, but he had sent them with the carriers in the night bus from Kathmandu. The day before that had already caused problems, since we had already entered the Annapurna Conservation Area in Tatopani and the official did not want to accept our copy. Only by a call from the top we were allowed to continue. In Jomsom, however, it was no longer just a copy, so that our carriers with all the papers went here.

After all formalities could be clarified quickly, then it went on the last stretch to Kagbeni, always along the Kali Gandaki. Unfortunately, the weather got worse, so it even snowed a little when we arrived, and our walk in Kagbeni was very short. Happy to have finally arrived and to be able to rest our tired and shaken bones, we went to bed early. Outside, you could hear the heavy storm shaking the thick walls of the guesthouse all night, and somehow we all got a little nervous. Tomorrow, our big adventure was about to start: our hike to the capital of the forbidden kingdom Mustang. What would we expect?