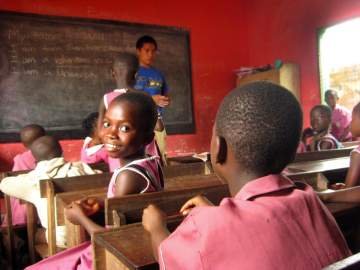 The FSJ abroad has long been the most widespread voluntary service abroad in Germany. So widespread that “FSJ abroad” is often used today as an umbrella term for voluntary work abroad – whether for regulated voluntary services or for flexible volunteer work, whether really in the social field or even as an “FSJ abroad with animals” (sigh ). But it is important that right one To distinguish voluntary social years abroad as a clearly defined support program from other volunteer missions in Africa, Asia, South America or Europe. The fact is that there are almost no FSJ jobs abroad because the program is almost completely replaced by other volunteer services. We took a closer look at the alternatives and summarized the results for you in our graphic.

Most people use the term “FSJ abroad” as a general term for voluntary work abroad and not for the precisely defined regulated volunteer program.

So if you’re looking for something in general Volunteer projects are where you can help for a few weeks or a few months while on vacation, an intermediate year or a break in an emerging or developing country, then you don’t need to deal much with rules.

Just look around on our portal and find a flexible volunteer project with trustworthy organizations that suits you.

If you are really looking for information on the “FSJ abroad” funding program, scroll down a little further.

Definition of Voluntary Social Year as a regulated voluntary service

The Voluntary Social Year has existed for around 50 years and was the first legally regulated voluntary service in Europe at the time. Founded as a social service for high school graduates in nursing and elderly care, the FSJ became popular as a female counterpart to community service in the 80s and became popular in the year 2002 also officially an alternative to community service. Today, even after the civil service has been suspended in Germany, the FSJ offers over 40,000 female and male volunteers a wide range of fields, e.g. in children’s institutions, nursing stations or sports clubs. Although the FSJ was never intended as a voluntary service abroad, since 1993 volunteers have been able to complete an FSJ in Africa, Asia, Latin America, Australia-Oceania, North America or Europe.

You can find more information on the subject of the voluntary social year abroad + organizations that offer it at the Federal Working Group FSJ.

At the same time, “FSJ Abroad” has also become the colloquial umbrella term for helping abroad over the years. No matter whether it’s a work camp, regulated voluntary service or flexible volunteer work without a fixed framework – many media reports or blog articles put everything in one pot and regularly cause confusion.

Therefore keep your eyes open during your further research: “FSJ abroad” is used in the sense of the regulated voluntary service described in detail on this page, or as a generic term that says nothing about the general conditions

The projects that you can find here on wegweiser-freiwilligenarbeit.com belong to the field of flexible volunteering, where you can largely choose what you want to do where from when for how long without an application process. So this is not only possible for a whole year, but also for 4 weeks or a few months.

In contrast to the FSJ, the new programs are designed from the start as voluntary services abroad and meanwhile ensure that the number of vacant FSJ positions abroad is steadily falling. While more than 1,500 volunteers went abroad via FSJ in 2009, there have been so few since 2015 that the statistics no longer show them individually. Nothing has changed in 2019 either. 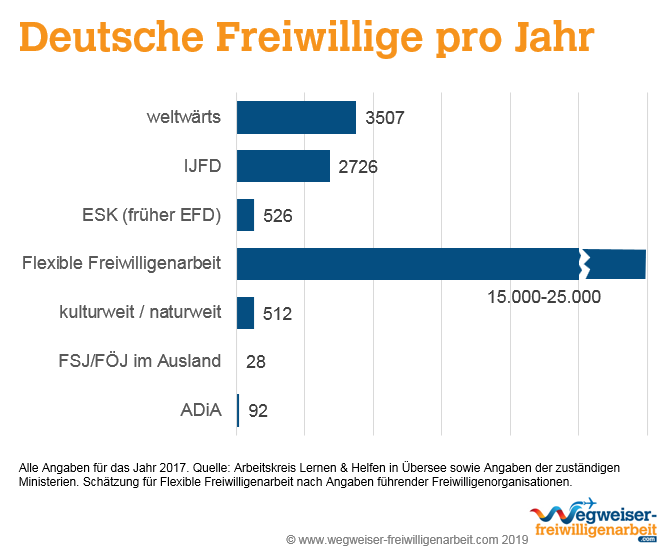 In theory, the service is organized quite flexibly: According to guidelines, volunteers can only go abroad for half a year for their FSJ or stay up to 18 months. In practice, the name is voluntary social year but program, so that in 2011 around 93% of the participants stayed abroad for exactly one year.

This is what the sponsoring organizations want and there are very good reasons. The longer the volunteers stay in the country of assignment, the better they can learn the local language, understand the local situation and ultimately help the project.

However, if you only have a few months available and e.g. If you want to help during the holidays or a bridging period in Africa, Asia, South America or Europe, you will usually only find what you need with flexible volunteer work. At weltwärts the average duration of the assignment is 11.5 months and the European voluntary service, which can exceptionally be 3 months or shorter, only goes to Europe and Mediterranean countries. 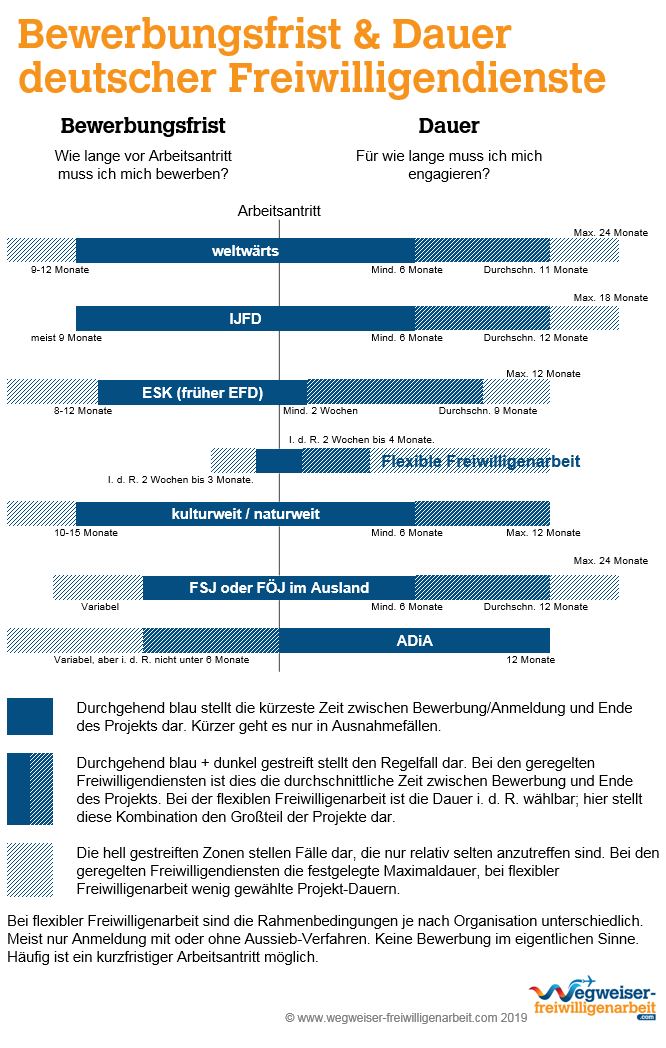 Cost: Is an FSJ abroad free of charge?

Since the end of compulsory military service, the relationship between the FSJ abroad and the budgets of prospective volunteers has been put to the test. The reason: Changes in government funding result in lower grants for the FSJ abroad.

The sponsoring organizations are rarely able to fund an FSJ position on their own and generally expect the volunteers to set up a donor group, with the up to € 4,000 per year. Although there are still some providers that can organize a stay abroad without the volunteers’ own contribution, a free FSJ abroad has become the exception.

We believe that voluntary participation by the volunteer is absolutely legitimate, but the FSJ abroad, like weltwärts or the IJFD, loses the nimbus of free voluntary service as a result. 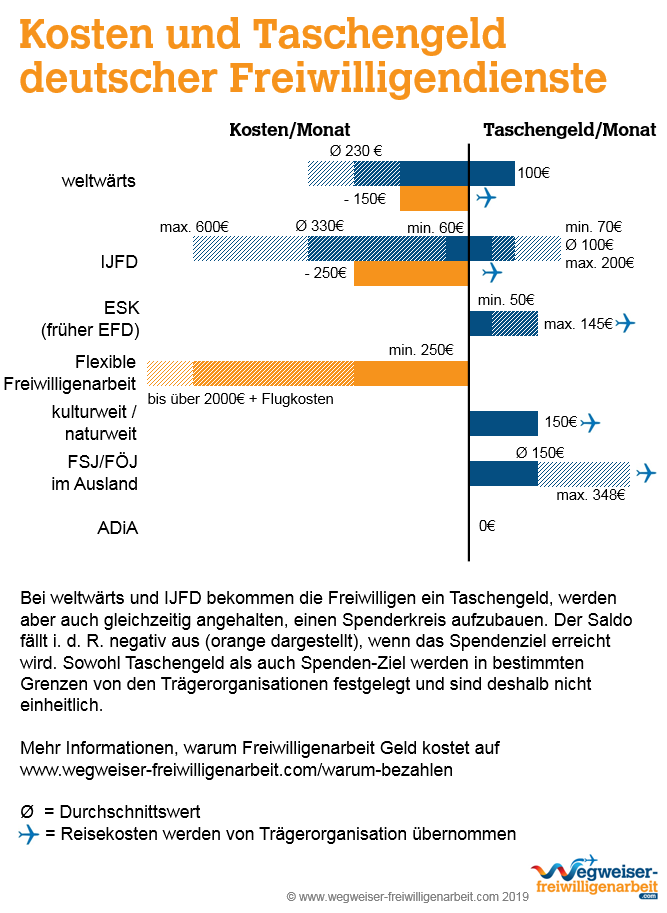 For information on where there are vacancies for an FSJ abroad in 2019 or 2020 and the application process, applicants should contact the various sponsoring organizations directly. Since the individual federal states are responsible for FSJ and FÖJ, it is in the nature the fact that there is no central job exchange or application body. You can find a list of all organizations on the website of the Federal Ministry of Family Affairs.

It is then wise to get up early when applying, because the application phase usually begins just under a year before departure. All the e.g. If you want to go abroad in summer 2020, you will have to find a job from autumn 2019. The projects usually start between July and September, and only a few FSJ positions abroad are filled at a different time of the year. It just means not to miss the application deadline, otherwise there is a risk of a year of honor or the struggle with other stragglers for the few positions with a different start date.

When applying, the sponsors expect:

Those who successfully overcome this first hurdle will be invited to a selection meeting by the sending organizations and examined a little more closely in a personal interview. This is also an opportunity for applicants to learn more about the possible uses.

At the end of the application process, only about 25% of the applicants will have the FSJ position they are hoping for, as, like all other public voluntary services, there are significantly more applicants than places.

Alternatives for an FSJ abroad

As made clear in the previous chapter, those who want to do an FSJ abroad in 2019 are usually too late. With a few exceptions, the application process for other regulated voluntary services is already complete. If you still want to volunteer in 2019 or as part of a year abroad in the school year 2019-2020, all that’s left is flexible volunteering.

At wegweiser-freiwilligenarbeit.com you will find hundreds of flexible volunteer projects in over 50 countries, which are carried out by more than 25 volunteer organizations.

Before starting, however, all FSJ students must take part in preparatory seminars. There are a total of 25 such seminar days, which take place before, during and after the assignment abroad.

The volunteers are also legally insured through the sponsoring organizations.