The nominees have been determined – Game of the Year 2018 !

Which game will be game of the year 2018? On May 14, 2018 the time had finally come again, the jury "Game of the Year" announced this year’s nominations. 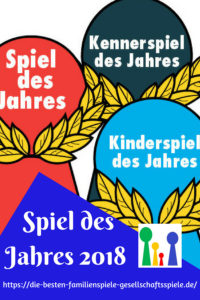 hope on the game box. The Game of the Year Jury awards are the most important award a game can receive for games and publishers in the German-speaking region. Accordingly, the colorful pawns are popular and in demand, which also make them well known far beyond Germany and also secure the sales figures of a game for a few years.

Congratulations to all of the nominated games !

Azul is an extraordinary placement game and undoubtedly a highlight of the current game year. A few months ago I included Azul as an insider tip in our TOP 10 list of current games for the family. So it is only logical that Azul has now actually been nominated for the Game of the Year 2018. I am very happy about this nomination.

The beautiful, abstract placement game combines opposites and inspires both casual gamers and professionals. The material is also a feast for the eyes. The German version of Azul is published by Pegasus and is for 2 – 4 players, ages 8+, playing time about 45 minutes.

Update 7/23/18: We’re really excited! Azul became the Game of 2018 Elected! My very best wishes! My detailed game recommendation for Azul has also been completed on time!

Luxor is an adventurous treasure hunt in the interior of the ancient Egyptian temple. On the way to the temples you can already collect valuable statues and jewelry, but of course the most valuable are the sarcophagi in the burial chamber.

Until then, however, there is a long way to go, which also needs to be cleverly planned. An interesting card mechanism comes into play, which is somewhat reminiscent of the classic Bohnanza.

Luxor is a running and collecting game from Queen Games. 2 – 4 players, ages 8+, can play, here too the playing time is around 45 minutes.

Not only that. The “silent” game Macig Maze was nominated for its innovation in 2017. Now we have combined both: a quiet and cooperative card game or: The Mind.

Only human intuition guides you in this game. The Mind is a whole new challenge and experience. The simple rules make it easy to get started with The Mind. For all games nominated in 2018, The Mind is also for 2 – 4 players, ages 8+, the playing time is a little shorter at 20 – 30 minutes.

Buy The Mind from Amazon

There is also one Recommendation list for the game of the year 2018, where the jury recognizes other beautiful games that have barely missed a nomination. Majesty was also included on this list of recommendations, and I have already reported on this in detail.

The 2018 children’s game nominees are:

With emotions plays you do – at least with Emojito! This is a children’s game for many, which already has the character of a party game for children.

With facial expressions and noises, players represent feelings such as "curiosity" or "anger", which are depicted on lovingly designed cards. The players have to guess these feelings. Emojito! is not only a lot of fun, the children also learn a lot of empathy.

Emojito! from HUCH! & Friends is a soulful and fun children’s game for 2 -14 children from 7 years with a playing time of approx. 30 minutes.

The main character at Funkelschatz is a loving dragon dad who uses his breathing fire to melt the ice so that his dragon children can get to the frozen sparkling stones.

The ice is represented by a column of 9 rings, which are gradually removed carefully. The children can collect the fallen stones. However, before removing a ring, each child determines which color to collect. Who can collect the most sparkling stones? Sparkle requires tact, a little tactics and of course a bit of luck.

With Sparkle Treasure, the jury nominated nice child’s play in proven HABA quality, for 2 – 4 children from 5 years with a duration of approx. 15 minutes.

Update 11.6.2018 – the jury decided: Sparkle treasure is child’s play of 2018. Congratulations to the authors Lena & Günter Burkhardt and HABA Verlag!

Panic Mansion – the dancing haunted house is a fun skill and shake game. The long standard course is completely eliminated, since everyone immediately understands how Panic Mansion works.

The box bottom is divided into different rooms. After a randomly drawn card, certain figures have to be "shaken" into a certain room. If you do this first, you get the card, but also other obstructive animals in your box, which make the next tasks a bit more difficult from now on.

Panic Manison by Blue Orange Games is a fun and entertaining shaking fun for 2-4 children, ages 6+, playing time about 20 minutes.

The nominees for the Kennerspiel des Jahres 2018 are:

Each player tries to brew the largest potions from many ingredients in his cauldron. We diligently throw randomly drawn ingredients into our brewing vessel. But be careful, if there are too many crackers in the cauldron, this can explode. So maybe stop voluntarily beforehand?

Read my detailed recommendation for the Quedlinburg mercury.

This type of game mechanism is also called "push your luck". The game principle was very nicely implemented by Schmidt Spiele. So the fun and also the malicious joy of the Quaksalber von Quedlinburg lives primarily from our decisions and our willingness to take risks.

The entry is moderate for a potential connoisseur game of the year. 2 – 4 players, ages 10+, can play, the duration is approx. 45 minutes.

Update 7/23/18: Also happy about it we us very! Quedlingburg’s quacks became Expert game of the year 2018 Elected! My very best wishes!

I find it rather unusual to nominate a dice game for the expert game of 2018.

This may be due to the fact that each of the different color cubes is rated differently. The choice of which dice a player wants to score may also be well considered. If a player keeps high numbers of dice for himself, something good also falls off for the other players. So it’s pretty clever to a large extent based on our decisions. Nevertheless, it is easy to get started here as well, since the rating sheet clearly shows all the options.

Also pretty clever is published by Schmidt Spiele. The clever dice game is for 1 – 4 players, ages 8+ (according to the publisher, the jury corrects this to 10 years) and takes about 30 minutes. 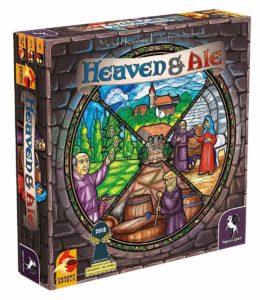 As the last game on the list of nominees, its heavyweight follows: Heaven & ale.

The beautiful theme of brewing beer, however, leaves no comfort or time to rest. Heaven and Ale is a challenging tactical board game and is aimed at the game-tested audience in terms of age and the task to be accomplished.

With Heaven & Ale was nominated for a strategy game, as experienced players traditionally want from a connoisseur game of the year. Heaven & Ale comes from eggert, is for 2 – 4 players, ages 12+ and lasts 60 – 90 minutes.

This year the jury also decided to award a special prize. This does them at irregular intervals to honor a game that somehow doesn’t fit into the given categories. In 2018, the jury has been making use of this option for a long time and is awarding the special prize for the game of 2018

Pandemic Legacy – Seasons 2 is the sequel to a series of "evolving" legacy games that are very popular among gamers and fans. Accordingly, the target group for this game is clearly located above the connoisseur game level. It is played in several iterations, if possible always in the same composition, with other players.

Pandemic Legacy – Seasons 2 by Z-Man Games is a cooperative strategy game for 2 to 4 players, ages 14+,

This year the jury again surprised me with one or the other nomination, but also non-nomination.

Of course, I personally also have my favorites and preferred candidates. The attentive reader will surely notice this, although I try to be reasonably objective in my reporting for the nominations. This is mainly due to the fact that at the time the nominations were published, I did not know all of the games in detail myself. I will only get a comprehensive picture after a few test games.

So you can stay curious about which games I will report on in the course of time.

Good games are timeless, I am convinced. That’s why I like to recommend taking a look at other vintages: