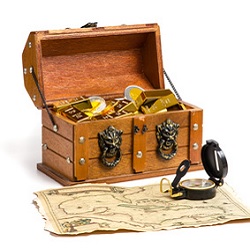 All men on deck and ready to play! At the pirate party, the little sailors and women are of course primarily interested in the treasures that can be looted at the birthday games. But the birthday games must of course fit the theme of the party, otherwise no pirate will probably go on board to play with the landlubbers. But no fear, here you will find the best games for the pirate party. 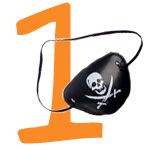 The game "Pirate Gold" should not be missing at any pirate party. However, you need to do a little preparatory work for this game. Your little pirate will be happy to help you prepare for the children’s birthday. For the game you need to fold small paper boats. You need about three to four boats per child. The more paper boats you have, the more difficult and therefore more exciting the pirate game becomes. As pirate gold, you ideally take gold coins, either plastic or chocolate. You need so many gold coins that there is a coin hidden under every third ship. After you have folded all the paper boats, a gold coin is stuck under every third ship.

Glue the pirate’s treasure under the boats so that the coins cannot be seen when the paper boats are on the ground. The pirate ships with glued in gold treasure should not differ from those without coins. When the pirate ships are all prepared, they are placed on the floor or on the birthday table so that the children cannot see them. Put a blue blanket or tablecloth under it beforehand. It looks like the ships are floating on the sea. Now the birthday child and the little guests of the pirate party can join.

The children must now find the pirate gold boats. Of course, in the little treasure hunt, you can’t just uncover all ships, that would be too easy and the game would be over too quickly. That is why the cube comes into play. The happy party pirates may now roll the dice in turn. If a child rolls a six, it can look under one of the boats. If there is a gold treasure under the paper ship, the little pirate may keep it. The boat can either be removed from the game or, to make it a little more difficult, put back into the sea. If there is no gold coin under the paper ship, it is simply put on the water again. Like a memory game, the attentive birthday pirates have to remember which ships have already been turned over and which have not yet. The party game is over when all the gold treasures have been recovered by the brave pirates. 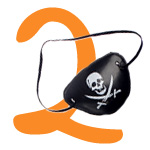 This pirate party game is a variation of the popular classic "Journey to Jerusalem". Most children already know the rules of the game for the trip to Jerusalem from other children’s birthdays. Therefore, the game "shore leave" will not need much explanation. Pillows or towels are laid out in a circle on the floor. Exactly one towel or pillow less than children are involved. These pillows or towels symbolize the ships at the pirate party.

Now music is played, ideally pirate songs or sea noises. As long as the music is on, the little pirates have to go ashore and have to run in circles around the pillows. As soon as the music is switched off, the pirates have to get back on their ship immediately, which means that every child has to jump on one of the pillows or towels as quickly as possible. The teammate, who could no longer get hold of a ship, is eliminated. A ship is removed, the music starts playing again and the next round begins. The child who got hold of the last ship won. To sweeten the brave pirates’ exits from the game, you can give a candy or gold coin to any pirate who couldn’t get hold of a ship. So at the Pirate Children’s Birthday, losing is still fun. 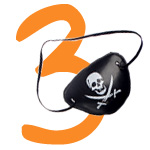 The game "Shark Attack" not only suits the pirate party very well, but is also wonderfully suited to work out a little for the small party on the children’s birthday party. A lot of space is required for this pirate game. Ideally, it is played outdoors or in a large room, because the shark attack is usually quite wild. If you play the game in the apartment, it is best to move the furniture as far as possible to the edge of the room and clear away objects that could fall down so that the little pirates do not get injured while playing and nothing breaks at the party.

The crew is divided into two groups. The children in the first group are sharks, those in the other group are pirates in the ship. The pirate ship is symbolized by a hula hoop or a rope on the floor. The pirates have to stand in the hula hoop, i.e. in their ship. The sharks swim around the ship. At the command "shark attack" the sharks have to try to pull the pirates out of the ship. Here, the Children, the Pulling pirates only by the arms. Pushing or the like is of course prohibited.

The sharks can decide whether to pull out a child together at the beginning or whether each shark packs a pirate alone. As well may the Pirates, of course, if they notice that someone has almost been pulled out of their crew, help them by trying to hold onto it. As a game leader, you can give the children tips when you see that one of the little party pirates is being attacked by several sharks. If a pirate is standing outside the tire with both legs, it is considered to have been pulled out of the ship. The pirates that were dragged into the sea no longer play along. The birthday game is over when all the pirates have been pulled out of the pirate ship. If the team is in the mood for a second round, the teams can now switch and the players who were previously the pirates now become the sharks and vice versa. Try to be part of the game so that the wild pirate party is not too riotous, especially if the little guests of the children’s birthday party differ in age and therefore physical strength. 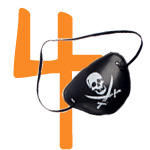 The island hopping party game is best played at an outdoor pirate party or in a large apartment, because some space is required for the game. Four square pieces of carpet or carpet tiles are required. Alternatively, you can cut out squares from cardboard boxes. The squares should be approximately 25 x 25 cm. The squares symbolize islands in the game. The rest of the bottom is the sea. The players are divided into two equal groups. If there is an odd number of children on the children’s birthday and it is therefore not possible to form two groups of the same size, this is not a problem. In the group that has one player less, a child simply has to run twice. It is best to determine this before starting the game so that there are no interruptions during the game.

For the game, a start line is marked with a rope or a long cloth, which is also the finish line. A few meters away from the start line, two buckets are placed next to each other at the same height and at a distance. The adventurous privateers line up in groups behind the start line. Both groups start at the same time. When the starting shot is fired, the first child in each group has to run, run once around the bucket and back to the starting line. As soon as it has reached the start line, the next player in the group starts running until all players have run once. The group whose last runner was the first to cross the finish line won the pirate party game.

So far the pirate game is not a big challenge for the birthday guests, so now comes the difficulty. As previously mentioned, the carpet or cardboard squares symbolize islands. The rest of the bottom is the sea. The children must not touch the water, but only jump from island to island. Each group gets two island squares. The respective runner may only move across the two islands. To do this, he stands on a square and places the next one in front of him, now climbs onto it and places the rear square in front of him. He hops forward from island to island. If a player touches the sea, he must return to the starting line if he has not yet reached the bucket that marks the middle of the racetrack. If he has already passed the bucket, that is, if he is already on the way back, he only has to go back to the bucket. 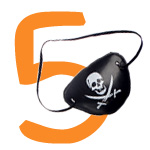 The game "Sinking Ships" simply fits perfectly to the pirate party. The party game is also ideal for the children’s birthday party in the apartment, since it does not take up much space. For this pirate game you need rubber balls to symbolize the cannonball. It is best to get a rubber ball for each child. This way, the battle-proven pirates can take their cannonballs home with them at the end of their children’s birthday. You also need an egg pallet. Egg pallets are large boxes on which eggs are sold individually. Often organic or greengrocers have such egg pallets when they sell eggs piece by piece. If you cannot find an egg pallet, you can simply make one yourself for the party by gluing the lower parts of the egg cartons together, so that a large plate of egg cartons is created.

This field of egg boxes is the playing field or the sea. The troughs in which the eggs normally lie symbolize the ships. For example, if you glue 6 pieces of 6 egg boxes together, you have 36 ships. The ships now receive ratings, which means that you write numbers from 1 to 3 in the egg troughs. You can either write the numbers wildly in the troughs, or you can write, as with a dartboard, the 1 in the outermost troughs, the 2 in the middle and the 3 in the hollows in the middle of the egg box.

The finished playing field is now placed on the floor. The children stand a little distance from the field. The aim of the game is for the little gunners to shoot down the ships with their rubber balls. That means you have to throw the rubber ball into the troughs of the egg cartons. Before starting the party with your birthday child, it is best to try out how far the children can stand from the field to hit the ships without making it too easy. The little pirates are now allowed to throw their rubber cannon balls into the egg boxes one after the other in order to hit the ships. Everyone pirate has five shots. Whenever the birthday shooters hit an egg box cradle, i.e. have shot down a ship, they receive the points that are in the egg cradle. The child with the highest score at the end of the game is allowed to enter the pirate party winner list.