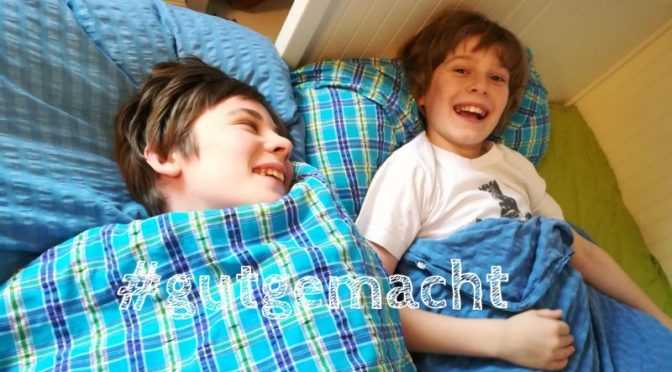 #gutgemacht: What’s going on with us (and what’s not)

Séverine of Mom on the rocks finds that in her everyday family life is a lot of hype – but that there is also at least one thing that works really well. Something where as a mother she just did everything right. One should also be aware of such things, says Séverine, and I think so too. We are allowed to celebrate as mothers and fathers! My contribution to the blog parade #gutgemacht.

Most of the time it’s like this: You look at other people’s children and marvel at what they can do. How awesome it is. And with what ease mother and father stand by and do not even consider it worth mentioning.

By no means did I do everything right in my parenting!

My children are not perfect

Our constant theme is order and reliability. Since my boys leave much to be desired.

Especially in the case of the large, this runs across the testimony: illegible writing, constantly forgetting the sports equipment, notices completely.

At home Janis then says: “I do not need to learn, I can do more than half of the points, that’s enough” (and then promptly only three mistakes, which takes all the wind out of my sails, grrr!).

This is similar with Silas, although fortunately, by nature, he cares a bit more about his belongings. Then there are only classics in the evening at just after eight (or for breakfast): “Oh, I need to immediately a yellow Papphefter / your collection of Hindu gods / your signature on the consent, which I unfortunately in the schoolyard in a puddle fell and therefore I threw away. “

I am sometimes a beautiful raven mother

The bad thing is: I’m not a bit better. Something comes from something, and so. For most of the time the teacher sent the request for the yellow cardboard file etc. by e-mail days ago, and I should actually know.

But I always have so much on the list, so many projects at the same time, that something always slides down the back. Sometimes these are unfortunately the kids. They are at the top of my list of priorities, but sometimes I’m just too shy.

I’ve already done it and went to school to pick up Silas. On that occasion, I then briefly discussed with the one teacher something about the new school flyer, whose text I took care of, and talked to the Hortnerin about my theater project, and then Janis came, complained of migraines and wanted home early. And then I drove back – with Janis, but without Silas. I forgot my own child at school.

These are the moments when I am convinced that I am the worst mother in the world.

But actually I’m not so bad

There are other things that slip. And you should really pay attention to this much more often!

What I was (and am) really good at is a consequence. My boys always know what they are about, and that’s what I say.

“But you are strict parents,” I have often heard in the course of my motherhood. Sometimes in admiring, sometimes blaming tones. There were and are just reliable rules with us.

Quite a matter of course, which are no longer self-evident today.

Sometimes it was hard

In infancy, this was often uncomfortable for us parents, and it has sometimes cost us pretty nerves. It would be so easy to feed the child under the table with biscuits, if you finally want to talk in peace. Or to move the bedtime backwards when there is a visit. Or the child to push the bar for 80 cents the piece into his hand, so that the screaming stops. Instead, I left (once or twice) the supermarket with a roaring child and no shopping. And (much more often) renounced social contacts, because in the meantime I put my tired child to bed instead of keeping it amused with sweets.

There were also exceptions, of course. But those were then clearly named as such, and never came through quarreling.

Children who put themselves to bed

I believe that our firm family rules – especially in my creative-chaotic basic disposition – have given my children a reliable framework and have done them good.

Of course, they have questioned them again and again and sometimes rubbed against it. Of course, I still repeat various rules in continuous loop (especially those with the “hello”). But in the meantime, they have (most of the time) become flesh-and-blooded.

And now we harvest.

Already on our big trip to Europe, we benefited greatly from the fact that the guys knew what we expected from them. If we were a couch surfer somewhere, we said at eight in the evening, “Children, change your clothes, brush your teeth and sleep!” And the children went and brushed their teeth and went to sleep.

Sometimes they even quarreled in bed with each other. But as a rule that worked reliably with our then 10- and 7-year-olds. 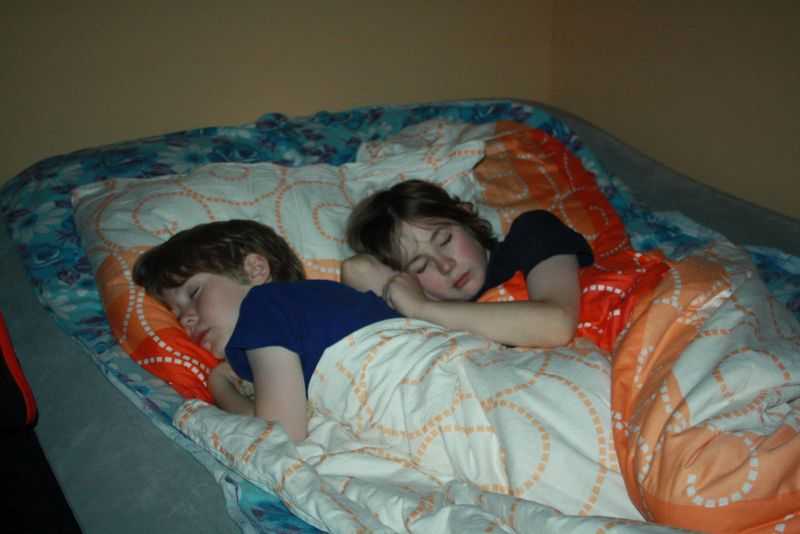 When we come to the Couchsurfing guest room in the evening, the air bed fraction sleeps in blissful peace and has carried itself there. Running.

Family life just works much smoother when a bit of discipline is involved.

This of course applies to both sides. Often we make arrangements: Now it’s off to the museum, and you’re so good that you can name five things that impressed you afterwards. Afterwards there will be cake in the café and a round of playgrounds. “Or so. That works. And I think that’s great!

By now Martin and I can go out during the week. The kids bring themselves to bed and that works too. Well, they’re already 13 and 11. Meanwhile, if I start grandma on it and come up the stairs at half past eight, then the dinner is neatly put away, the lights off and the boys almost always fell asleep.

By the way, another great bonus of our early tapping prank rule is that the boys get out of bed early in the morning without any problems. Janis often gets up at five, half past five, gets dressed, feeds the cat, and then enjoys a quiet time with a book. I usually have to nudge Silas at twenty past six, but then he’ll be happy as well. No fight to get the children on the way, no school in half sleep.

So, dear mothers and fathers, now it’s your turn! What is going on really well in your home? With all the everyday chaos and all seemingly difficult to handle feelings of parental inadequacy: What can you deserve to pat on the back? Write it down and join the blog parade of MamaOnTheRocks! Or at least go briefly into you and think about it for yourself. For sure there is something there. Important principles. Or little things that deserve to be made aware of. Or just a lot.