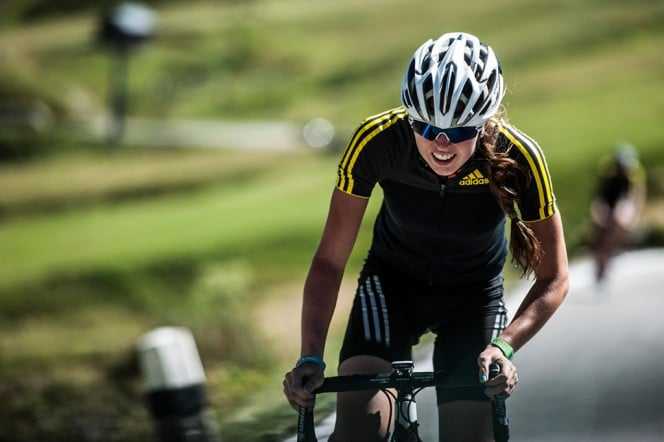 Interview about cycling and the adidas journey 2013

We met Hannah at the adidas journeys 2013 in South Triol by cycling with adidas one week from Bolzano to Venice. Hannah is a british full time cyclist who has run out of Britain in National level races as well as European races as the Tour of Brittany. She lived in Belgium for a short while in 2012, racing at UCI level races as well as Kermesses. Hannah is a three times National Champion in Great Britain. After cycling to the Mendel Pass near Bolzano, we had a quick chat with us about cycling and the adidas journeys.


You started biking five years ago and you are now a quite successful road biker in England. What the reason you choose biking as your favorite sport?

From the age of around 7 I was competing in athletics and running cross country until I was 14 I got injured. I had arthritis in my knee, which forced me to have to quit. My mom decided to take me to Manchester Velodrome and I really enjoyed it, so I went back again and again. My grandad was a racing cyclist so he used to come to me with all my races and training sessions. I started racing on the track first then I started racing when I was a first year junior in 2009.

You are three times national champion in the UK and only 21 years old. What are your plans and goals for the near future?

For the near future I have the Senior National Track Championships coming up at the end of September so I hope to do well where I am hoping for a top 5 or better. I am racing in the Scratch Race, Points Race and Madison.

adidas has choosen you as a testimonial for their brand and you are one of the “my girls” face for adidas. How and when did this relationship start?

It happened when I saw there was a casting in London for ‘a big sports brand’ in November 2012 so I went along then I did not hear back from them for a while. I said I was going to Manchester for the re-casting, then the next day I had a phone call saying they wanted to come to my location and where I do most of my training. A day later I had a phone call saying #mygirls and filming would start in a week. I did the filming for #mygirls in January 2013, and ever since Adidas have been really supportive especially with the #adidasjourneys trip to the Dolomites, Italy.

adidas has invited you to be part of the adidas journeys. Eight days of pain or eight days of fun?

It was definitely 8 days of fun, the pain was a good pain, everyone helped motivate each other on the mountain passes, it was a sense of achievement and pleasure. There was no dull moment, I came to Bolzano, and I did not know anyone, but when I left, I was just waiting for you in October time ! I do not think I’ve ever laughed so much in one week!

After cycling one week in the dolomites with a team of eight bikers from all over Europe. How did you expierence the week in the team?

10 years, so at first it felt like a little daunting, but I got to know everyone really well. The person in the team is fabulous, someone who is struggling up the mountain.

Hannah, cycling outdoor season is almost over. What are your plans for next year?

Over the winter months I want to be ready for 2014, hopefully I will be back to Bremen and Berlin 6days in January as well. I mostly want to be on the road during the summer months domestically in the UK and abroad in Europe.