Culture, leisure, travel and lifestyle with children in Hamburg – and elsewhere

HaSy Concerts: Children learn casually and with a lot of fun 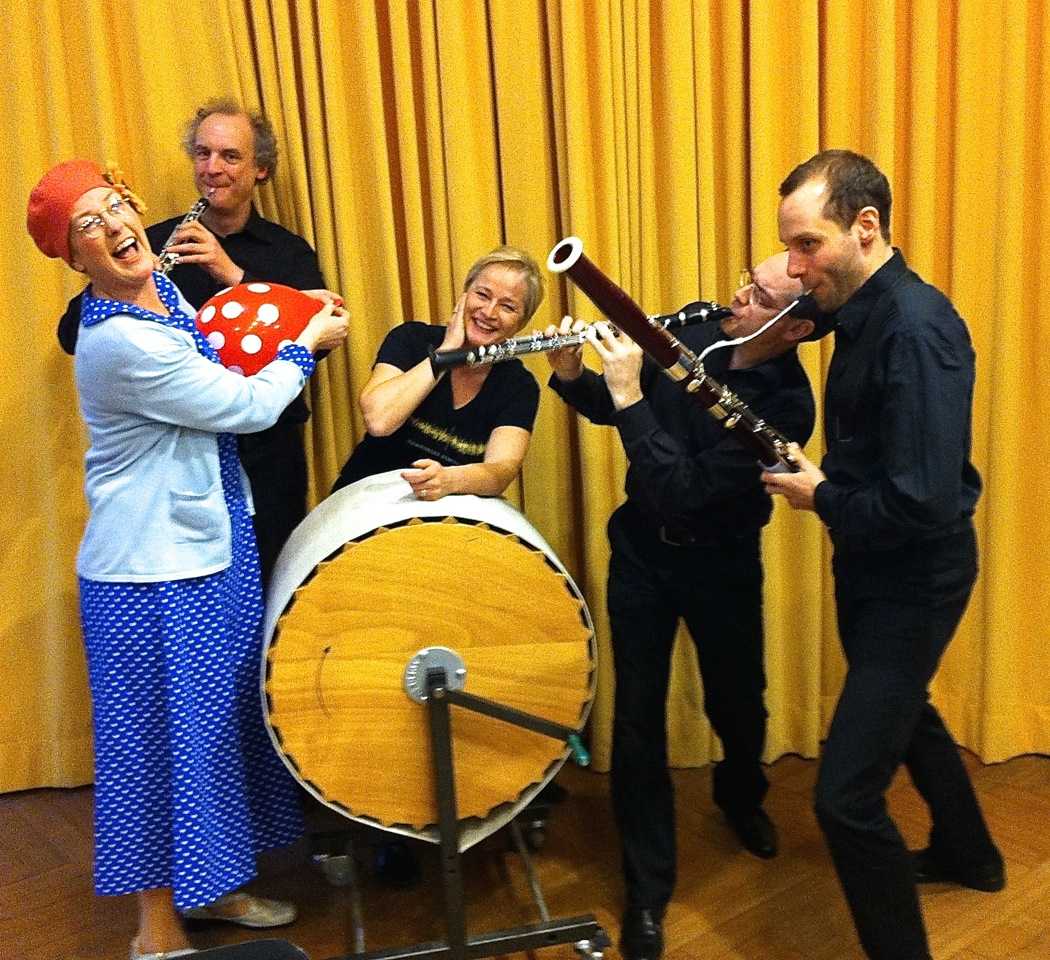 Listen, sing, learn, dance – HaSy is THE Concert series for preschool children by the Hamburgern symphonics (that’s why she’s called HaSy). We asked the concert teacher Susanne Grünig what makes her concerts so special and successful. 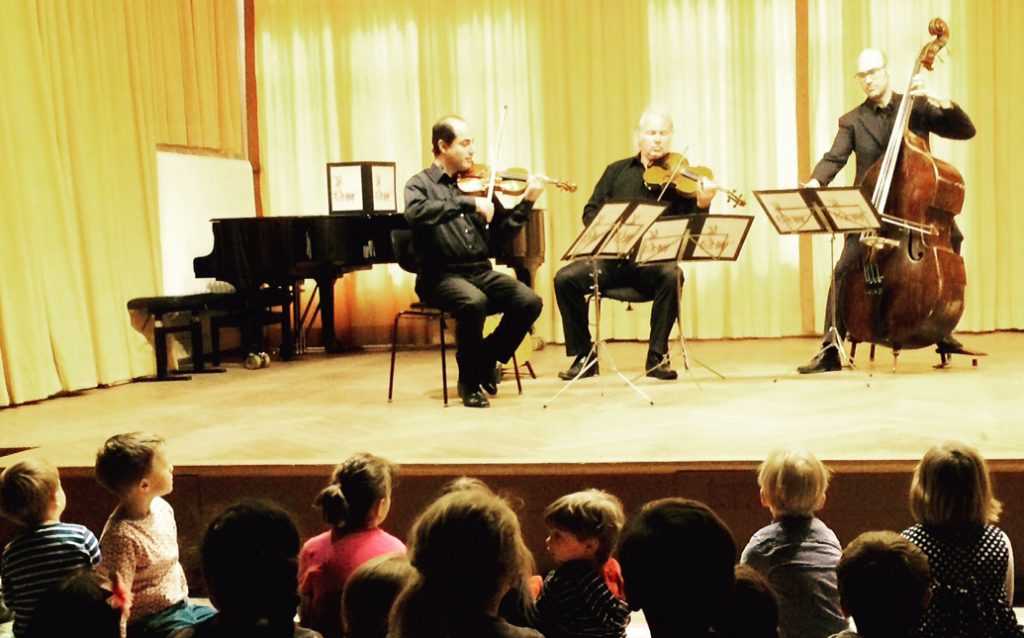 At the Hasy concerts in the Laeiszhalle, the children sit in front of the stage

“Ms. Muse is always late.” What else my children think of the HaSy concerts? “Ms. Muse is a bit crazy, but actually she just does it,” says the young Hambuger (5). “Ms. Grünig (he says Ms. Güünich) sometimes reads a story,” adds Hamburger Knirps (3). “And we sing the HaSy song every time.”

In fact, the HaSy concerts follow the same pattern as children love. Every two weeks before the curtain opens again for the Hamburg Symphony Orchestra, every HaSy child receives a letter that is intended to tune in to the next concert. Every concert has a theme. For example, last season it was the four elements: Fire. Water, earth and air. The children sit on cushions right in front of the stage. Each instrument is briefly introduced at the beginning, both by name and with a small solo. This is followed by music to listening, dancing and singing along. Here, active and passive parts alternate pleasantly for the children, so that even movement-happy boys and girls never sit too long on their bottoms.

Concert educator and HaSy inventor Susanne Grünig in an interview 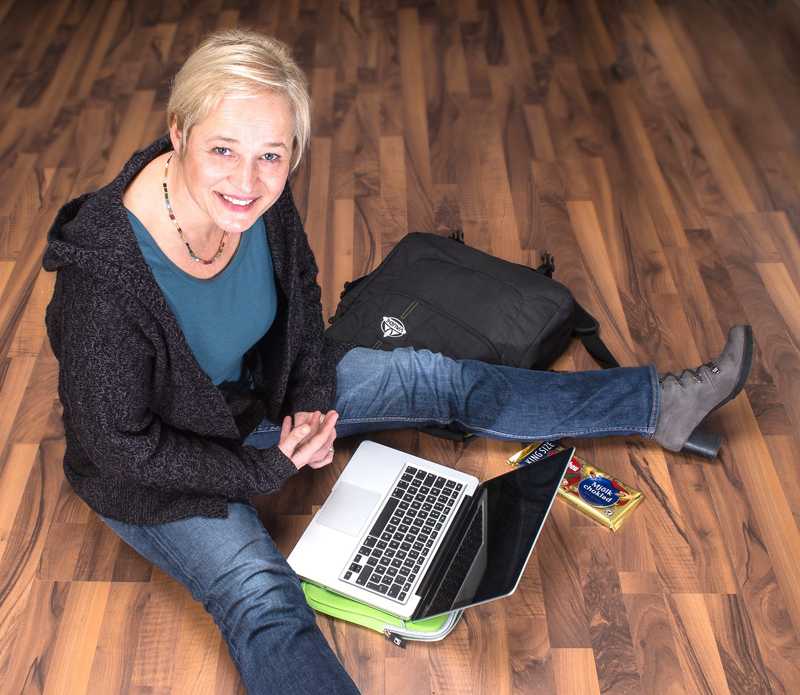 A heart for music, a heart for children, a computer and enough chocolate – that’s what Susanne Grünig needs for the conceptual preparation of the HaSy concerts.

Frau Grünig, What’s so special about the HaSy concert series?

What is special is that our HaSy concerts can do without child-friendly scenery, without special light and without any decoration. On the stage, only the main characters are to be seen: musicians of the Hamburg Symphony Orchestra in smaller chamber music ensembles and in black concert clothing. Sounds boring, but it is not for the kids. First we show a normal concert situation. However, this is softened by Ms. Muse and me as a presenter.

The idea of ​​sustainability is also special: you can only buy tickets in a pack of four – that is, as a subscription. As a result, the impressions do not evaporate. It can actually be felt that the children in the last of the four concerts are already “old HaSys” and could accumulate a lot of knowledge.

Another special feature is the HaSy letter, which comes to every child in the house and to make the upcoming topic enjoy. There is information, games and sometimes something to do crafts or songs. That the families actually deal with the post office, I can very clearly notice in the concert.

And last but not least: The greats in the audience – parents or grandparents – are conceptually involved with me and obviously have as much fun at the concerts as the little ones. An important point, which the children also perceive very well.

“Every HaSy concert is unique”

What do you do when you consider topics for the concerts and prepare the individual concerts in terms of content? 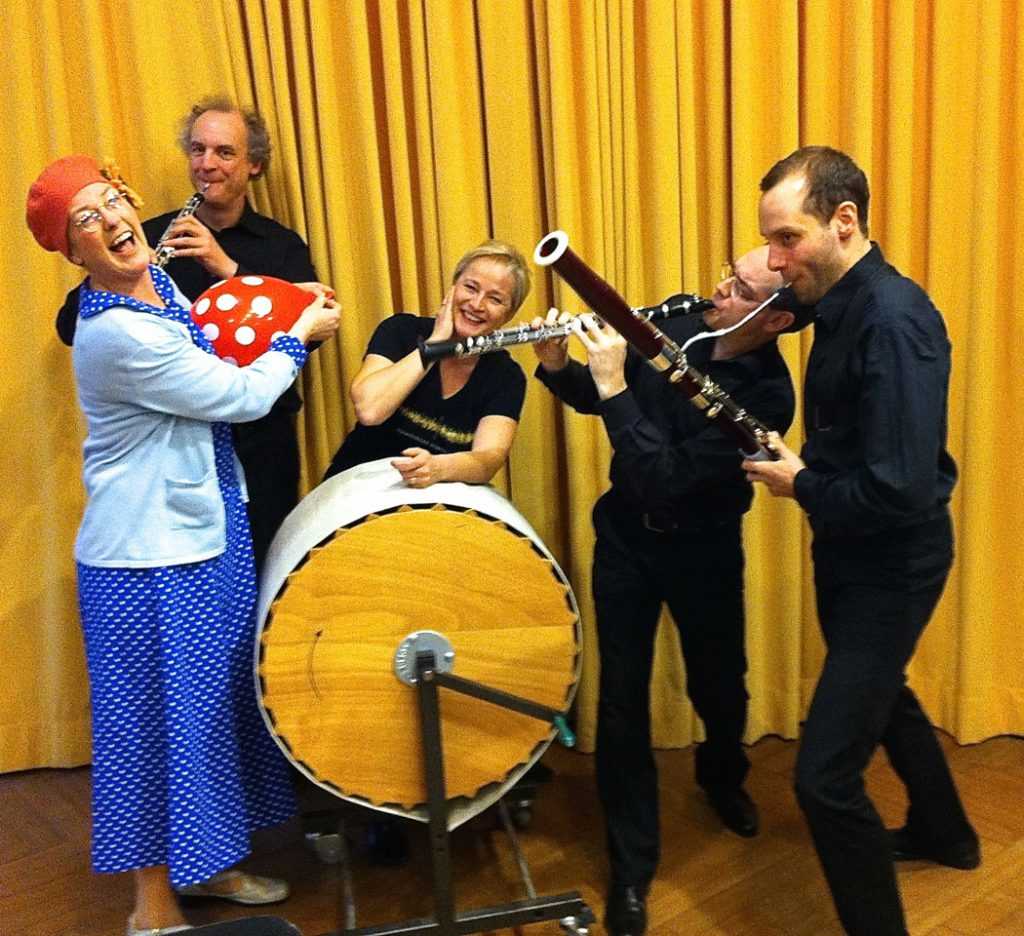 HaSy concerts are fun – the big and small spectators, the musicians and the presenters Ms. Muse (left) and Susanne Grünig (mi)

The topics should be as close as possible to the life environment of the children, but also reach the adults. That’s why I often do places in Hamburg on the topic. So we visited the Michel, the harbor, a department store, the main station or the city park musically. My preparation is always based on the music. I leave the selection of music almost completely to the ensembles so that they enjoy playing and I am forced to come up with new ideas again and again and not run into a rut. That’s why every concert has been unique for many years. This too is unusual and a peculiarity.

In the conception, I also try to introduce the children to as many orchestral instruments as possible in a single season. Every instrument is always heard individually and usually we bring an instrument closer to the focus. It is also important that the musicians are involved as people in the happenings. Our teams from the Hamburger Symphoniker are always with a lot of – also scenic – joy of playing, which in my opinion makes up a large part of the success of this concert series.

What is important to you so that children enjoy the concerts and learn something at the same time??

Important in the conception is the change between listening and participating. In preschool age, sitting still is difficult. That’s why there must always be something to move, sing and dance. From Mozart gymnastics to the common canon, there are many actions. A point not to be underestimated is the laughter. Laughter relaxes and makes the ears ready for a music that is actually only heard. Our songs are never longer than three minutes. That’s how long children can listen well and focused at that age. Very important are the many interesting information about the music and the respective topic. Knowledge is always conveyed in funny dialogues, so that nothing is educational or obviously pedagogical. It is best if the children (and parents) do not even notice what they learn and learn by the way.

It is also important to me to show a wide musical range. Therefore, there are almost always very sophisticated music from different eras on the ears. 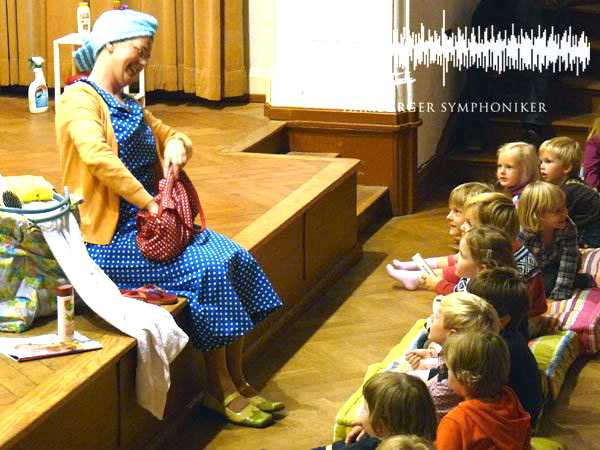 Ms. Muse in conversation with the little listeners of the Hasy concert

With the character of Ms. Muse, you have created a somewhat stupid woman, who is miles ahead of even the children in their knowledge. Why does children fascinate this character so much??

Oh, Mrs. Muse is not stupid at all, but above all childlike and clownesk. And like a clown, she is always curious, never unforgiving and very enthusiastic. The children love Ms. Muse because they feel very familiar about their mistakes or mishaps. Ms. Muse is playful, does not adhere to any (concert) rule and always teams up with the children. For me, the invention of this figure has the advantage that everything new is not explained to the children, but the raunchy wife Muse. By the way, she is my neighbor in concert, works in a craft shop and is almost always late. Basically, we use the old proven constellation of clown (stupid August) and white clown, pronounced: Ernie & Bert or Dick & Stupid, where always the dubbing reaps the sympathies of the audience. That’s why the audience likes Ms. Muse.

“Children are a wonderful audience”

Your target group are children from three to six years. Since you are moderating the HaSy concerts, you also have direct contact with you. What is special about you in this work?

The special challenge is the direct feedback from the children during a concert. If my concept is wrong, it gets instantly restless and loud in the kids‘ audience. Fortunately, that happens only very rarely and is basically not bad at all. Every time I learn from my mistakes, I know exactly where the sticking point lay. It is important that one has confidence in the children and takes them seriously.

A balancing act between under-demand and over-demand is every concept. Both would not be good. But the kids are a wonderful audience. Not biased in terms of newer sounds and equipped with a huge dose of imagination and humor.

“Traveling in the next season”

Can you already give an outlook on the next HaSy season??

Yes gladly. This time it’s traveling with the small and big ears. Together with the musicians we travel across the sea, into the snow, to the stars and into the mountains.

Ms. Muse will take it all literally again and come with packed suitcases. In any case, there is – as always – wonderful music with a variety of chamber music ensembles! Traveling is part of the life-world of most children in the audience. There are many points of contact. 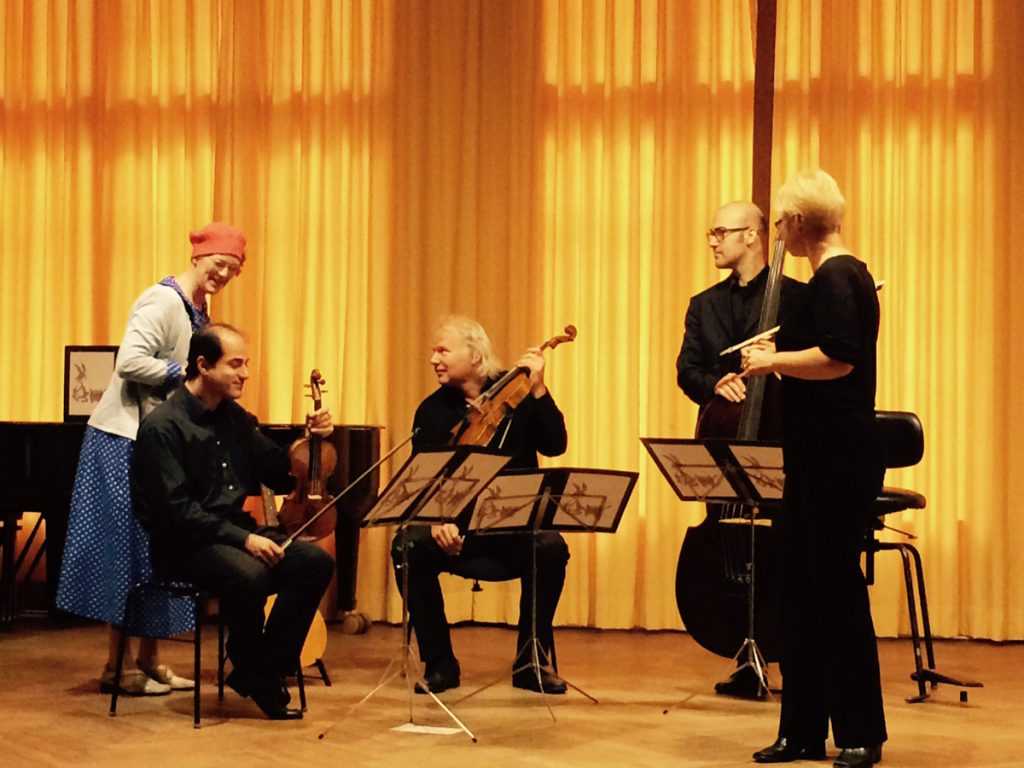 And finally a private question: you are the mother of a grown-up son. How did you teach him classical music??

It was possible for me without effort, because I studied piano and sat a lot at the piano. Often students were at home in the afternoon. So our son always had music around.

Sometimes we visited the big children’s concerts in the Laeiszhalle with the wonderful Hamburger Symphoniker. Unfortunately, such concert series as the HaSy concerts did not exist back then. &# 128578; Incidentally, our son is now studying music himself.

Mrs Grünig, we thank you for the interview

Tip: Soon the pre-sale for the new season starts. The HaSy concerts are very successful and booked accordingly. But: every year children are too big for HaSy and new children can move up. So: Now put on the waiting list and with luck to secure tickets for the next four concerts from January 2017. The four concerts will take place from January to June 2017. The exact dates can be found here. Ticket hotline: (040) 357 666 331