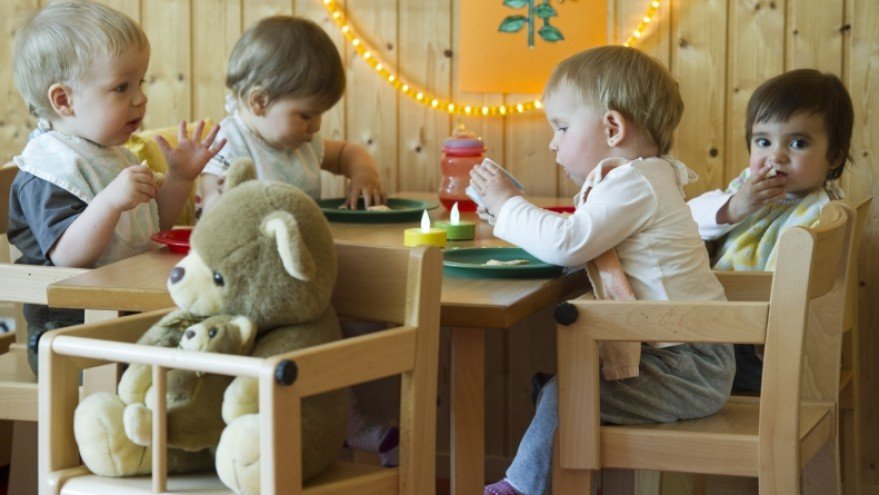 The first large crèche, then known as a nursery, opened in Paris in Europe in 1844. Just seven years later, such facilities already existed in Dresden and Hamburg. The groundbreaking work of Friedrich Fröbel (1782-1852), the founder of kindergarten in Germany, served as the basis for this new form of childcare. With the rural exodus, the beginning of industrialization and the associated dissolution of large families, it was only a matter of time before a new form of childcare was found outside the family association, and Fröbel had the right ideas and suggestions.

This project also met with interest in the Mecklenburg capital of Schwerin. The first steps were taken at the suggestion and request of Grand Duchess Elisabeth in 1874, after toddler schools and a children’s hospital had already been opened in the city.

A year later – exactly 140 years ago – a crèche opened its doors. In the first half of the year, 16 infants, eleven Girls and five boys, cared for. The Grand Ducal personal physician Dr. wrote a detailed report about this and about the first five years of existence of this crib. C. Mettenheimer in the publication published by Hinstorff in 1881 about the "Schweriner infant preservation facility" (on the history of public welfare and health care in Mecklenburg). The crèche was financed by donations from the ruling family and numerous donors, and was managed by an association. Their location was in the former “Cadettenhaus” on Bergstrasse. The association issued a regulation with the most important paragraph 2: "The purpose of the institution is: Such poor, married or widowed women who work through themselves and their family need to feed their Children up to at the age of 2, exceptionally up to the age of 3, on all weekdays with the exception of Sunday, but not at night, to lose weight, to maintain, to care for and to feed, unless the latter is able to do the work herself. "

In addition to the head and two assistants, the management of the institution was alternately carried out by one of the twelve supervisory women from Schwerin, who were predominantly middle-class. There was also good medical care for the children. The crèche was open from six in the morning to seven in the evening, and in the winter from seven in the morning.

Each child was washed twice over the entire body in the crib, was given his own house clothes, and in the event of illness, the crèche doctor isolated the child. If the children were outside the house, they were dressed according to the temperatures. The food for the infants and toddlers consisted mainly of sweetened milk, a soup at noon, depending on their age with vegetables, meat, rice, a roll and milk in the afternoon and evening. If the mothers were still breastfeeding, this diet was preferred in the morning and in the evening. The premises in the former Cadettenhaus, Bergstrasse 21, were large, bright, warm with a view of a large garden. From 1875 to 1880, 128 children attended the crèche, including 52 infants up to one year old.

The parents themselves paid only a very small amount for the accommodation of the children, who came from about 50 percent of families in which mother and father had to work outside the home. A good 25 percent of those in need of care came from families who were in dire need because of drinking or the death of their father. The first successes soon arose, as Mettenheimer – ennobled by the Grand Duke in the meantime – found in his annual report 1877/78. He writes: “The parents were able to convince themselves that the children in the crèche look fresher, friendlier, and better nourished than before; Unhealthy dispositions, signs of scrofulosis and English illness, rashes, swellings of the glands and irritation of the mucous membrane have been lost in many children through the stay in our institution. "

For the future of this childcare Mettenheimer advised to open a second such facility in another part of the city. He also said that consideration should be given to creating accommodation for infants born out of wedlock.

After his publication appeared in 1881, a larger building, the Anna Hospital, was built two years later and handed over to a crèche. One of Carl von Mettenheimer’s greatest and most lasting successes was the establishment of a modern children’s hospital in Graal-Müritz in the Baltic Sea in 1884. The Rehabilitation Children’s Clinic still exists today – modernized in 1996 – under the old name "Tannenhof".