Hedgehogs are nocturnal loners and mostly only to be found in pairs at the time of mating. During the day the hedgehogs sleep in their hideaway under bushes or in high grass. It is only at dusk that they begin their active phase in which they search for food. Hedgehogs can easily travel up to two kilometers on a night excursion, although they generally move rather slowly. If they are disturbed, they quickly trip away. Only when the hedgehog sees no possibility of escape does it curl up into a ball. Hedgehogs cannot jump, but they can climb obstacles up to about 20 centimeters high. 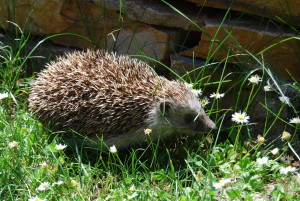 Hedgehogs prefer structurally rich habitats with changing vegetation: woody plants, even those with dense undergrowth, are just as important as open areas (i.e. without woody plants) with tall grass. Such varied habitats offer a variety of sleeping places and food sources. Hedgehogs are insectivores, but in addition to beetles and other insects, worms, caterpillars and snails are at the top of their menu. If the opportunity arises, hedgehogs also eat carrion, eggs or fall fruit, but these are not part of their main diet.

Hedgehogs are loyal to the location is called if possible, they remain in the same area throughout their lives. When it gets cold at the end of October and beginning of November, the hedgehogs fall into hibernation, which they only end in April or May. The nest for hibernation differs from the day shelters in summer. It is usually much more stable under branches, a hedge or in a cavity and is insulated against the winter cold with grass and especially leaves. In gardens, foliage or compost heaps are also often used as winter quarters.
During its hibernation, the hedgehog reduces its body temperature, breathing and heartbeats and draws on its fat reserves that have been eaten up over the summer. It is therefore important that a hedgehog weighs more than 500 grams before hibernation. Hibernation can be briefly interrupted for foraging during warmer periods.

A fully grown hedgehog male can grow up to 30 cm long and 1200 grams. The females are usually a bit smaller and lighter. Especially after hibernation hedgehogs have lost a lot of weight and have to eat their "ideal weight" again.
The hedgehog’s body shape is compact, only the nose is pointed and elongated like a trunk. Hedgehogs have a large number of spines on their back and on the sides, which can be moved individually: the information here varies between 8,000 and 16,000 spines. Only the head, neck, stomach and feet are covered with fur. The approximately 1 mm thick spines end in a sharp tip. In normal condition, the spines rest loosely on the body and are directed backwards. In the event of danger, the hedgehog can contract its strong back muscles, put it over your body like a sack and set up the spines. 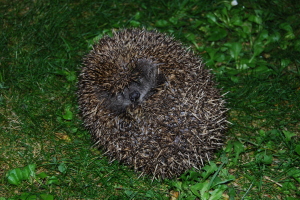 Hedgehogs become sexually mature at around two years of age. The mating season lasts from April to August. A female can have two babies a year, depending on the conditions. Mostly 4-7 hedgehog babies are born at once. After a gestation period of 34-49 days, the mother nurses the boys for about 18-20 days. At birth, hedgehogs have significantly fewer, very white spines, which are embedded under the back skin. It is only after a few days that the spines begin to slide out and gradually get their typical brown and white banding. After about three weeks, the boys start their first forays and try solid food for the first time. At the age of six weeks, the boys are on their own and each go their own way.

A hedgehog reaches an average age of 4 years in nature. Unfortunately, many young hedgehogs do not survive the first winter because they have not stored enough fat.

Hedgehogs smell and hear very well, but their sense of sight is not so well developed. The orientation is therefore mainly via the sense of smell and hearing. The puffing sounds that a hedgehog emits arise because the hedgehog exhales and breathes in as quickly as possible to absorb odors. You have probably noticed that you mostly hear a hedgehog before you see it. Puffing, smacking or rustling – these are the sounds you need to watch out for!

Hedgehogs don’t have many natural enemies. The few enemies include the eagle owl, fox and badger. In the settlement area, these animals hardly pose a threat to the hedgehog. Here there are completely different dangers, unfortunately often caused by us humans, that threaten the hedgehog: busy streets, lack of food and loss of habitat. Possible hedgehog habitats are also destroyed if garden maintenance is too thorough. Although hedgehogs are generally good swimmers, a pool or garden pond can doom them. In open water in the garden, it is therefore always advisable to create one or the other flat bank or a small ramp on which the hedgehog (but also other animals) can climb out in an emergency.

A “hedgehog-friendly” garden should offer sufficient hiding and nesting opportunities such as hedges, shrubbery, piles of leaves and compost. It is also important that the hedgehog finds enough food in the form of insects and worms. These animals are mainly in poorly cared for areas of the garden. A “wild corner” offers the hedgehog, for example, an ideal place to look for food, but also to search for nesting material or to find a place to sleep. In such a "wild corner" the meadow is only mowed once a year, leaves and branches can be piled up and the garden plants can be left in autumn. This not only promotes the hedgehog, but also offers a number of other animals, such as wild bees, suitable nesting opportunities.

… A hedgehog can smell an earthworm that is 3 cm below the surface of the earth?

… there are also types of hedgehogs that do not have spines but a fur on them move to have?

… Prickly hedgehogs have spines at birth, which are put into the back skin?

… in the hedgehog, the muscles under the back skin can contract like a sack and put over the body? Therefore, the hedgehog sees when it curls up, as a Bullet out.

… milk is very harmful to hedgehogs because they cannot tolerate the milk sugar they contain?

… a hedgehog can reduce its body temperature from 35 ° C to 6 ° C during hibernation?

… a hedgehog can reduce its heartbeat from 280 to 18 heartbeats per minute during hibernation?

… a hedgehog can reduce its breathing frequency from 20 to 5 breaths per minute during hibernation?