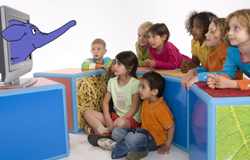 "I can see what you can not see"

How television beginners watch TV
Media are an integral part of everyday life in children. Even in kindergarten, children experience a variety of media. The most important role is played by television. A representative survey of mothers by the International Central Institute for Youth and Educational Television (IZI) showed in 2006 that only a small minority in kindergarten age does not watch TV. The proportion of children watching television up to their second birthday is 16%, and between two and three years this number rises to 74%. The proportion of four and five year olds is 96%.
At this age, children are new to television. They see and understand TV content differently than adults, they need more time to discover new things and therefore a program that is tailored to their needs.

Children have to learn television first
Children are in a phase between the ages of three and six
significant changes affecting their perception, thinking, acting and feeling
strongly influence. In order to understand television, special skills are required, which develop in the course of childhood development and are only acquired through the use of the medium.
Parents are the most important companions. For a positive family television experience, it is therefore important to know what preschoolers’ understanding skills are. 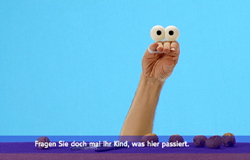 Children need a simple dramaturgy
Preschool children have a different view of what they see on TV: they often focus their attention on individual excerpts without recognizing a connection. The focus of the children falls primarily on elements that are related to their own environment and the current interests of the child. If you have conversations with preschool children about their television experiences, they line up one detail at a time without paying attention to the "correct" order. They emphasize the elements that seem important to them and decorate them. You are not yet able to follow a long story. Complex courses of action and narrative patterns, e.g. B. with main and subplots or time and place jumps young children can not understand.
It is only from the age of six that children gradually develop the ability to recognize a “common thread” in programs and thus follow a narrative thread in a story.

Basically, children have to understand what they are looking at in order to process it. The attention span of young children is still developmental
not particularly long. Short, completed television stories, such as in the program with the elephant, thus meet the limited ability to concentrate and the detailed perception of preschool children. 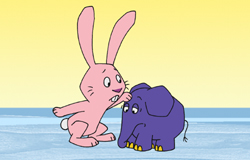 Children still have to learn to put themselves in others’ shoes
The characters are particularly important for television beginners. From the age of two, children learn to tell television characters apart. First, preschool children capture external characteristics such as the appearance or action of the characters and not their feelings, motives and intentions. Children between the ages of three and six view the world from a self-centered perspective and assume that everyone else thinks, feels, and acts in the same way as they do. They find it difficult to imagine a scene from someone else’s perspective. The storyline of a television program is therefore often not understood by children because they have problems putting themselves in the position of the characters on the screen. As a result, they only recognize very simple and unambiguous emotional statements. Relationships are also only recorded as simple opposites, for example according to the “good-evil scheme”. It is only around the age of five that children begin to understand the different perspectives of the characters.

Children only learn that television is made
TV beginners do not recognize whether what they see on TV is real or staged. In general, they find it difficult to distinguish between reality and fiction. The little ones watch z. B. behind the TV to explore where the characters live. Over time, an understanding develops that television is only an image of reality. For the most part, three-year-olds, regardless of genre, assume that what they see on the screen actually exists. For them, cartoon series are just as real as, for example, news programs. The five- and six-year-olds are only able to recognize differences and patterns of programs with increasing television experience. You begin to assess the reality of the broadcast. Cartoon characters are now classified as "not real" people and actors as "real" people, for example. 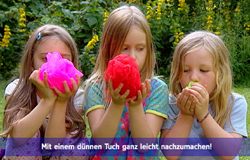 children need age-appropriate starting points
Children use their previous experiences to understand television offers. They are looking for links to what they experience every day and what concerns them.
In doing so, they align what they see with their existing worldview and experiences rather than adapting their experiences to the medium. They link the television content to their child-specific topics, such as grow up, assert yourself, deal with your own feelings, be loved and recognized.
The show with the elephant tells stories about emotional and social issues such as courage, tolerance, friendship, strife and reconciliation. Children can find themselves in it and have a variety of options to connect with the characters’ feelings, problems and patterns of action.

Children see differently than adults
While for adults the correct understanding and keeping of information
In the foreground, children experience television as important, because they have not yet built up an understanding of television. For young children, television is an emotional medium that they experience holistically and do not want to understand rationally. The film perception is emotional and the psychological experience of the children also becomes physically visible: they laugh, they scream, they stand up, they trample with their feet, they comment, they keep their eyes and ears closed, etc.
For preschool children, television is not a purely passive activity that can only be irrigated. They live and think intensively with television and interact with television content. TV beginners like hands-on offers in which they can be addressed directly and participate, whether in the form of movement or exclamation. In the program with the elephant, the children will find a variety of options, e.g. B. gymnastics, guessing or singing.

You can support your child in their first television experiences by watching together, becoming active themselves and exchanging information with your child.