Qualification and further training of teachers for literacy and reading-spelling difficulties (LRS, dyslexia) 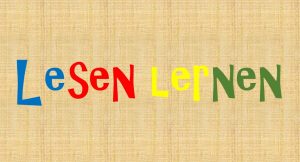 Learning to read: When it comes to the question of how children can best learn to read and write, a lot of people have become heated. For this reason, pupils have enjoyed constantly changing methods in the past decades. But how does learning to read actually work? What happens in the brain so that children not only see the salad of letters, but also recognize words?

Reading is not an innate ability, but must first be learned as a cultural technique. Complex neurological processes enable different brain areas to work together. In this way, images and objects connect to the language center and already acquired knowledge is activated. When reading, images and symbols (see) are linked in the brain with sounds (hear) and a context (know).

How to learn to read?

Learning to read takes place in different stages: First, an image is linked to a meaning. For example, a child learns that a chair usually has four legs and you can sit on it.

In the next step, alphabetical writing is learned, i.e. a connection is made between sounds and characters. For this, spoken words are broken down into individual segments. A word is assigned to a word picture. If this learning process succeeds, a child can read technically.

The final stage is the comprehension of meaning, i.e. the understanding of a text and its interpretation.

The theory of the 2-way model assumes two different ways of reading: The first, direct way of reading consists from direct access to a word-picture lexicon. The pronunciation of the word can also be called up directly here. The second, indirect way describes the reading of a word letter by letter, i.e. the serial translation of letters or groups of letters into sounds. Neurological studies confirm that both ways are important for reading and writing.

Which methods do you learn to read?

The two processing methods of the 2-way model (according to Max Coltheart) are also reflected in the methodological approaches Reading lessons low:

There has long been a real dispute over the question of which approach is more suitable. In the meantime, analytical-synthetic mixed forms are also used for the two teaching methods mentioned above aspects integrate the analytical and synthetic methods.

When do you learn to read and write??

Even before primary school begins, children have their first written language experiences, which are important for their later acquisition of written language. In preschool, certain words, such as one’s own name, are simply saved as a whole, recognized in each case or reproduced accordingly. One speaks of one here logographic writing: The children save a word as a logo and can name it. In fact, children also learn the terms for real logos (e.g. Coca-Cola or McDonalds).

In this phase, children already “write” by painting and scribbling. Symbols such as houses ("at home") or stick figures ("mom") are already linked here with the corresponding term. The acquisition of written language is similar, in which the symbols (= letters) are linked with a meaning (knowledge) and pronunciation (hearing).

The acquisition of written language proceeds in phases that partially overlap. There are numerous models for this. An example is this Step model according to Frith (1985/1986):

In our free alphaPROF courses you will find a detailed article on learning to read and write.

Know-it-all Lurs can of course explain the whole thing much better. The almost 10-minute episode "The Lürslein and the Words" of the Lurs Academy deals with letters, words, sentences and how everything is connected.