Introduce playfully or just practice? There are different methods by which writing is learned in Germany. But what is the best? A study has investigated this question. 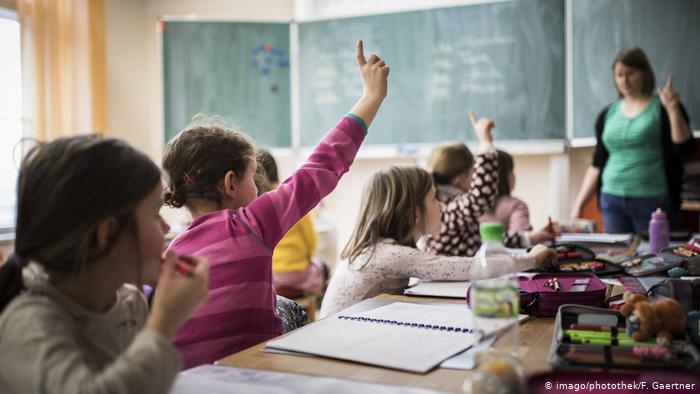 Many elementary school students in Germany have deficits in reading and spelling. According to the IGLU primary school reading survey at the end of 2017, one in five ten-year-olds in Germany cannot read in a way that they understand the text. And the 2016 IQB education trend among fourth graders showed that only 55 percent achieved or exceeded orthographic standard standards.

Psychologists from the University of Bonn have now examined three learning methods for learning to read and write in a study. They analyzed the learning success of around 3,000 primary school children in North Rhine-Westphalia, who were taught either according to the so-called "primer method", the "reading by writing" method or the "writing workshop approach". The results of the study were presented on September 17, 2018 at a conference of the Gesellschaft für Psychologie in Frankfurt.

According to the study, children who learn to read and write using the classic "primer method" have by far the best spelling skills, as Una Röhr-Sendlmeier from the Institute for Developmental Psychology and Educational Psychology reports. With the "primer method" letters and words are introduced step by step and according to fixed specifications.

The best results through the oldest method

For several years, the team of psychologists had compared the spelling skills of primary school children in NRW, who learned to read and write using the three different methods. According to the Bonn scientist Tobias Kuhl, the more than 3,000 children were first tested for their prior knowledge after they had started school. After that, dictations were evaluated five times each six months – "fibula children" were always the most powerful. Pupils who were taught using the “reading by writing” method made an average of 55 percent more spelling mistakes at the end of fourth grade, “workshop” students even 105 percent more than “primitive children”. Even pupils whose mother tongue was not German benefited from the “primer approach”.

Bonn scientist Tobias Kuhl, who participated in the study, explains the procedure: "We approached it without any value." The "reading by writing" and the "spelling workshop" demonstrably led to many errors. A fixed process from simple to complex has proven to be clearly superior, says Kuhl.

The "primer learning", which had been common in Germany for a long time, was almost completely replaced in some places, especially by the "reading by writing" method, until more and more criticism arose. The idea behind “Reading by Writing”: The students should write as much as possible freely – by ear – and learn to read. Correction of misspelled words is undesirable with this method because it demotivates the children.

The "spelling workshop" is an approach that builds on the fact that every child has their own rhythm and speed of learning. In contrast to the "primer method" also the Learning order is not rigid here.

The study has now sparked a broad debate. The statement that the primer leads to better spelling is far too general for the primary school association. "According to the current state of research, such a general statement is not possible and highly misleading," criticized the association.

Heinz-Peter Meidinger from the German Teachers’ Association opposes this: There is no reason to suspect that the study is unscientific. The results should be taken seriously. He says: “Teachers need a lot of pedagogical freedom when choosing the methods. The limit is reached, however, if the learning goal is not achieved. "

Udo Beckmann, Federal Chairman of the Teachers’ Union Association for Education and Upbringing (VBE), again accused him of discrediting the work of many primary school teachers. Many teachers worked successfully with a Approach that incorporates the “reading by writing concept”. "Each individual school should make a decision about how it teaches children to read and write in the first years of school," said the VBE boss.