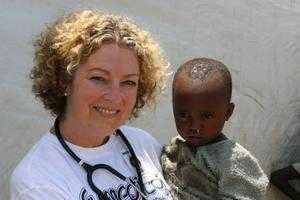 humedica nurse on “A heart for children” fundraising gala

On December 7th, the German TV channel ZDF broadcasted the great ZDF fundraising gala “Ein Herz für Kinder” at the best broadcasting time. Amongst others, the children’s nurse Wiebke Martens who has been working for humedica this year, had been invited.

She supported the medical team in the refugee camp Bubukwanda in Uganda, where, meanwhile, Congolese refugees can find a safe shelter and comprehensive care.

In the course of this fundraising gala, a film was shown, which describes the work of the humedica nurse and recommends warmly the life of the children in the refugee camp Bubkwanga to the spectators.

At the end of October 2013, a film a journalist crew of five, the prominent campaign sponsor Wolke Hegenbarth and humedica staff member Deborah Schieg had travelled directly into the area for the film shots.

The gala takes place every year before Christmas, in order to raise money for children in need. “Ein Herz für Kinder” has sponsored the humedica work for many years already and, this year again, donates 50,000 Euro for the refugee help in Uganda. humedica says “Thank you very much” for this longtime and exceptional support.

The whole year long, the Wilhelm Schlegel GmbH from Obermaiselstein embellishes many houses with a new façade. But business manager Wolfgang Schlegel took the time to come to the humedica headquarters personally, in order to hand over his Christmas donation of 1,000 Euro.

“This year, we deliberately abstained from offering presents to our business partners and decided to sponsor a charitable organization instead. Because of the regional proximity and of our confidence into the organization, we all immediately agreed on humedica”, says Schlegel, who was being shown around the humedica premises together with his wife Michaela.

humedica press officer Steffen Richter was much pleased about their great interest: “We are always very pleased, if our sponsors show interest in the backgrounds of our work. As a help organization, we want to show as much transparency as possible.”

Like many others, the pupils of the Sankt Martin Primary School in Marktoberdorf have been deeply moved by the pictures of the typhoon catastrophe and they decided to help. By organizing a fundraising concert 1,000 Euro could be raised, in order to support the humedica medical urgency help on the Philippines.

Together with deputy headmaster Edeltraud Süß, the head of school Jörg Schneider handed the check over to humedica staff member Lina Koch and explained his and his pupils’ motivation:

“We have held contact to humedica for many years and we know that our money is in good hands with them and will be used appropriately. We appreciate this, especially with a catastrophe like the one on the Philippines.”

humedica thanks all the children and their parents for their great efforts and practiced charity.

Moving for the Philippines

The Karl-Wagenfeld School in Münster proves that there are countless possibilities for active help. With a table tennis tournament and a fundraising run with the incredible number of 3,100 kilometers, the dedicated pupils raised over 8,000 Euro for the victims of typhoon “Haiyan”. 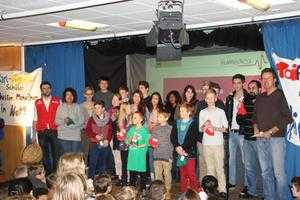 Thanks to various initiatives, the pupils collected 8,000 Euro of donations for the Philippines. Photo: humedica

The persons in charge of the charity campaign had become aware of the humedica commitment on the Phillipines by a radio interview with the medical team member Simon Oeckenpöhler and had immediately started planning further action. Shortly before Christmas, the proceeds could be handed over officially to the humedica representative Simon Oeckenpöhler.

The doctor from Münster had just come back from his disaster relief operation on the Philippines and had been much impressed by the highly motivated pupils: “The situation in the destroyed city Tacloban is still very difficult, so the people there extremely depend on external help. So I am even gladder to see, that young people here in Germany are eager to help the victims.”

humedica, too, says “Thank you very much!”, on behalf of those who will benefit from this help.