Children and young children belong to the risk group for an influenza disease. In addition to the widespread virus flu caused by type A influenza, toddlers can contract the more dangerous hemophilus influenza fall ill. 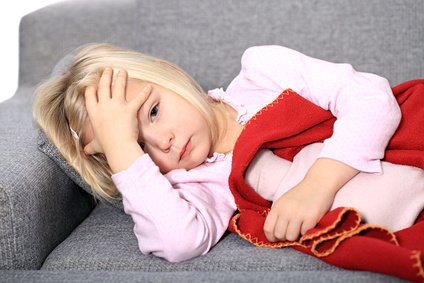 Haemophilus influenza B infection, or HIB infection for short, is a bacterial disease of the group of forms flu. It only occurs in children and toddlers before the age of five and is one of the most serious infectious diseases that children in Germany can develop.

The pathogen affects the respiratory tract

The Haemophilus influenza bacterium usually colonizes the upper respiratory tract at the beginning of the disease, i.e. the mouth, throat and nose area. From there it spreads rapidly and eventually affects the lungs, middle ear and even the brain. Frequent consequences of childhood Haemophilus influenza B infection are pneumonia, inflammation of the sinuses, middle ear and meninges. There is also a risk of laryngitis, which is often associated with a high risk of suffocation. Even if the prognosis is positive, if a larynx or meningitis caused by a Haemophilus Influenza B infection could be cured, serious long-term consequences for the child can be expected.

The incubation period for Haemophilus Influenza B infection is only two days to one week, which means that the first symptoms appear very soon after being infected. The child itself is also contagious immediately after the infection and even after a Haemophilus influenza B infection has subsided, the bacterium is excreted by droplet infection for several days to weeks. As a result of such a serious bacterial infection, in addition to the complications already described, there are other inflammatory processes in the body, such as:

The most serious complication, however, is meningitis, the meningitis that, if left untreated, leads to death in more than half of all cases.

Better to prevent than to treat

The Haemophilus Influenza B infection starts like a normal cold, but is getting worse. The first symptoms usually include high fever, dry cough, sore throat and swallowing pain as well as inflammation of the ear, nose and throat. Often the children complain of earache or pain in the area of ​​the sinuses, for example around the Upper jaw and nose.

If no immediate treatment is given, the infection spreads through the bronchi to the lungs, and a slimy cough develops with initially green, later also gray or bloody sputum. This wandering inflammation can eventually lead to epiglottitis, a throat infection, which causes the child considerable breathing problems. Finally, a Haemophilus Influenza B infection can lead to severe headaches, sensitivity to light and stiff neck. If these symptoms appear, there is usually a delayed meningitis.

In principle, HIB infection can be treated with antibiotics, but not every treatment is successful because the bacterial strains are particularly resistant. An early diagnosis is all the more important because the complications already described arise very quickly in the context of a Haemophilus infection, namely within a few days. An appropriate antibiotic can in any case help to reduce the bacterial load and limit bacterial growth. In addition, sick children are also treated symptomatically. For example, antipyretic drugs such as paracetamol are prescribed, but also mild pain relievers, cough syrups, cough relievers or cough suppressants.

Important: ASA or acetylsalicylic acid should not be given to children under 16 years of age, as serious complications such as Reye’s syndrome can occur.