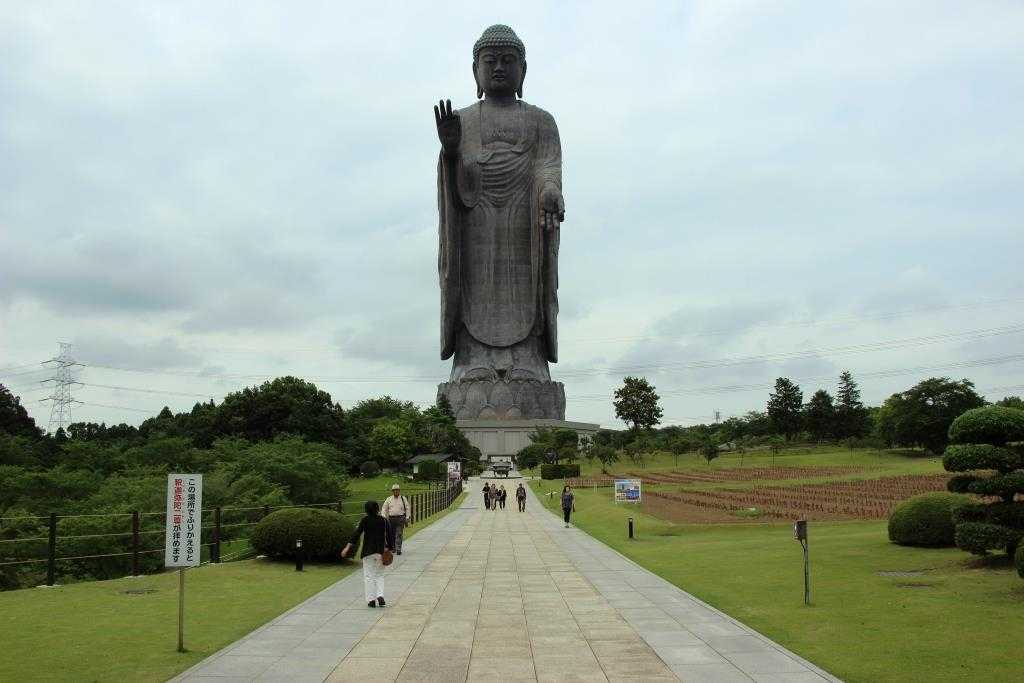 Insider tip near Tokyo: visit to the largest Buddha in the world

Admittedly, since 2002 he is no longer the greatest Buddha in the world. But with its 120 meters, the Ushiku Daibutsu stands near Tsuruga, just an hour from Tokyo, but very impressive from the landscape. We could not resist and paid him a visit.

Actually, we had a tight plan: start with the campervan in Narita, bulk shopping in the supermarket and then departure to the north, in the direction of Nikko. There we wanted to arrive before dusk to find a nice parking space for our first overnight stay in Campervan.

In fact, we then bolted in dense evening fog up the zig-zags up to the temple site Nikko and parked in complete darkness on the shores of Lake Chuzenji – whose beauty we could only admire the next morning. Because: We had spontaneously decided spontaneously to make a stopover on our Japan road trip, barely 30 minutes after we started in Narita at JapanCampers. 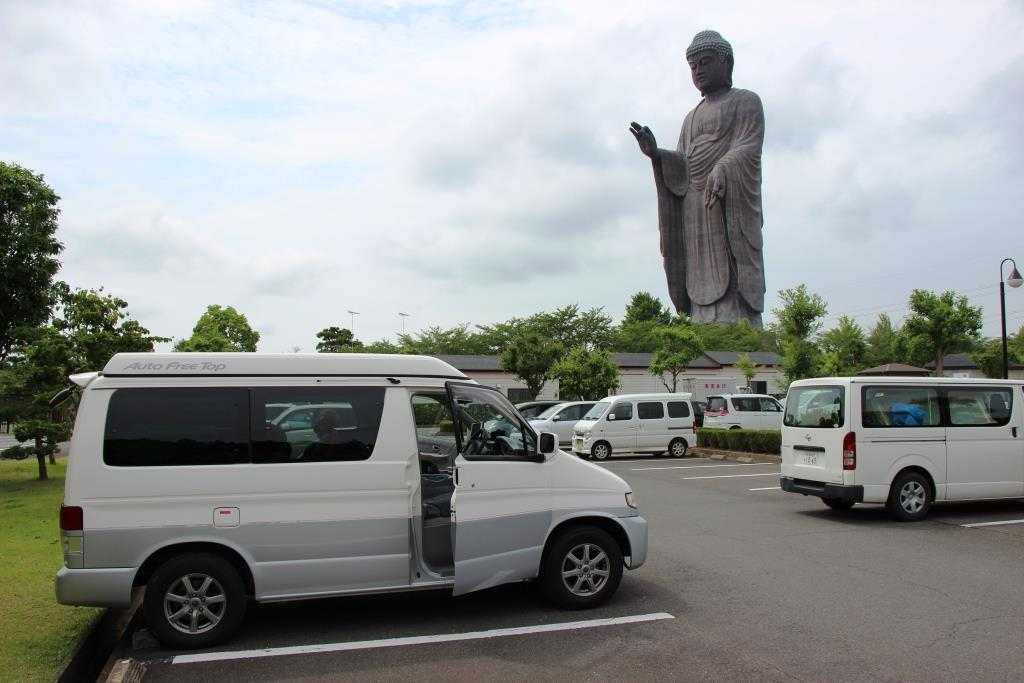 Move to the left and visit the Buddha!

Ushiku Daibutsu: a giant on the roadside

By the term “Giant Buddha” or “Daibutsu” (meaning the same thing), most travelers to Japan think of the fat, seated Buddha in Kamakura or the even larger Buddha seated in Nara in Japan’s oldest wooden building, the Todai-ji.

Both are neatly tall – the Kamakura Buddha measures 13 meters, his colleague in Nara nearly 15 meters. But now imagine a Buddha that is so big that the Buddha in Kamakura would fit in his open hand! The Statue of Liberty in New York would reach down to his waist. madness!

So we saw such a gigantic Buddha, as we drove on the Joban Highway from Narita in the direction of Nikko. The next exit, Ushiku, we took immediately to look at this statue up close.

The Ushiku daibutsu, also called Amitabha (in Sanskrit) or Amida Nyorai (in Japanese) and representing the Buddha of the Eternal Light, is truly huge – he towers 1100 meters up into the sky, and the walk-in, multi-level pedestal on which he stands, add another 20 meters to it.

As clever as the architects of ancient Japan were; they could not have erected a statue of this size (it weighs more than 4,000 tons, but the index finger is seven meters long). While the Amida Buddha in Kamakura has been there since 1252 and the Buddha in Nara is already 2,000 years old, the Ushiku Daibutsu celebrates its 25th anniversary in 2017. Sooo big is the Ushiku Daibutsu

He was installed by the Japanese Buddhist sect Pure Land to honor the birth of their founder Shinran. Initially celebrated as the largest statue in the world, he had to relinquish this title in 2002 – the honor now belongs to the golden Spring Temple Buddha in Lushan, China. Also from 2nd place he slipped in 2008, replaced by the Laykyun Setkar Buddha in Myanmar.

But the largest Buddha statue in Japan is the Ushiku Daibutsu still. And the Japanese find that so exciting that they come here in droves to … what to do? 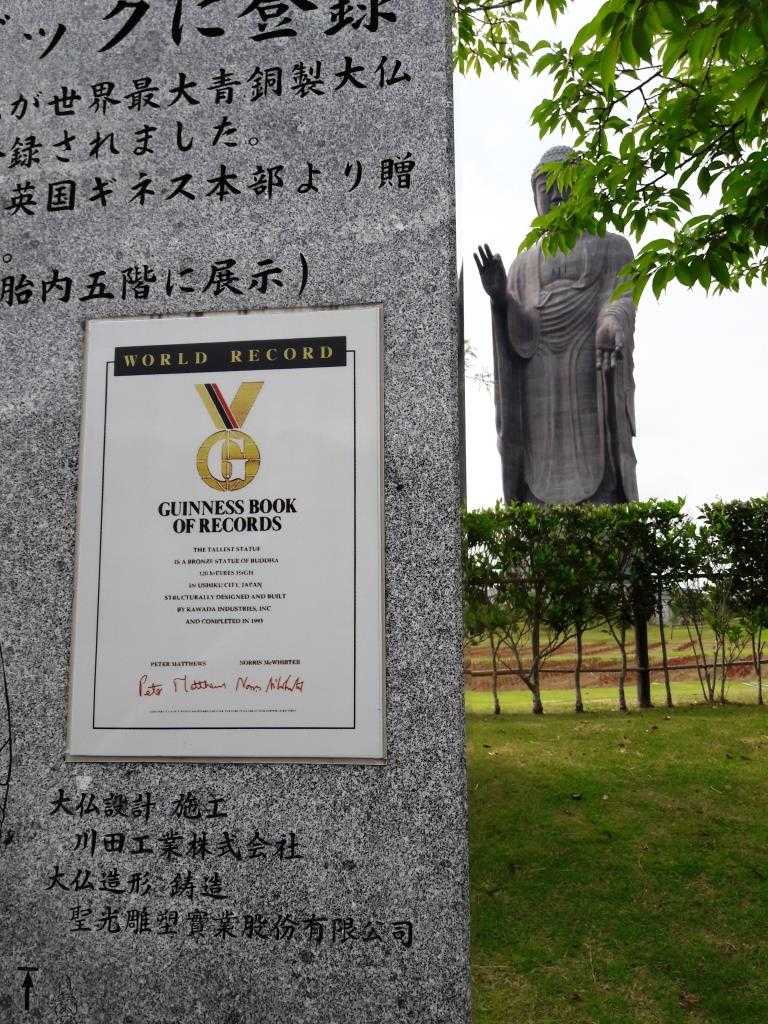 The proof: greatest Buddha, where gives! So, in Japan.

What can you do at Ushiku Daibutsu??

Yes, he is tall. Since you can already make some admiring photos. But the visitors are supposed to have even more experience offered, and above all they want to spend money and buy souvenirs – which is part of a successful trip to Japan.

At Ushiku Daibutsu, you can first buy Omiyage (souvenirs that are typical of the area and the attraction you visit) on a small shopping street, eat ice cream and have a quick bite to eat. You can buy stamp books and fill them with stamp images. You can buy wooden “emo” badges, write a wish on it and then hang the badge on a rack where the ghosts of the ancestors will hopefully drop by for a flying visit and fulfill one, two wishes. … and then hang up and hope!

You can buy and light incense sticks, and you can stroll around the edge of a pond in the small park at the foot of the statue and feed huge, hungry carp. A (very) small zoo with playground and a large picnic area are also available. These carp are verrrry hungrrrry!!

And, the coronation: You can climb the Ushiku Daibutsu, which is hollow, from the inside! That costs a staggering 800 yen and was our first tourist event on this trip to Japan, so let’s treat ourselves.

Welcomed by a long (exclusively Japanese) sermon, which probably related the meaning of the Daibutsu, we came through an atmospheric light show and several exhibition rooms on the pedestal (to see, among other things: a replica of the man-sized toe of the Buddha, interesting photos of the construction of the statue and of course the certificate from the Guinness Book of Records) to an elevator that took us to the chest of the Buddha (85 meters). Spherical light show in the foot of Ushiku Daibutsu And this is how it looks on the second floor: thousands of mini-Buddhas!

Here was unfortunately over – we could not, as hoped, look from the head of the statue, but only through two loopholes-like holes in the chest and back. As the Ibaraki region does not have much to offer in terms of landscape, the spectacularity was limited. Apparently you can see the Tokyo Skytree from up here on clear days. The view is … narrow

On the way down we were then led by the three underlying floors (typically Japan: you follow a marked with arrows tour, from which you can not deviate, make sure at strategic points very friendly ladies who show the way) and were allowed Among other things, admire a wall with 3,000 golden Buddha statues.

The Japanese visitors then devoted themselves to calligraphy; whoever can best paint the phrase “Namu Amida Butsa” (translated: “I find refuge in the Amida Buddha”) has won. Calligraphy is very popular in Japan

Well worth a visit to the Ushiku Daibutsu?

The dimensions of the Buddha statue are incredible and we did not regret the detour off the highway. We also enjoyed paying for the entrance to the park around the Daibutsu, it was fun to admire the Buddha from all sides, to light incense sticks in Japan’s largest incense burner and to ring the big gong – which is what you do in a Buddhist temple. … and the bell is ringing – is allowed and makes noise properly!

To go inside the statue is, in our opinion, rather superfluous. First of all, you have to spend a good deal of time here on weekends and holidays, and secondly – at least as a non-Buddhist and a non-Japanese person – you will find little enlightenment in here. The view from the top is not as great as the view from the bottom.

So, as you drive from Tokyo to the north, you see a huge Buddha standing on the roadside, then take the Ushiku exit and look at it! Then you can proudly say that you have seen the largest Buddha in Japan and the third largest statue in the world; and since the Buddha is not even mentioned in many (older) travel guides, you have even discovered a real insider tip. check! On the 15th of August fireworks will take place at the foot of the Buddha – it’s well worth it!

Without entrance you can walk over the extensive cemetery plants around the park and see the Buddha from some further distance. In winter, admission is 100 yen lower. The park around Ushiku Daibutsu is very nice

By car via the Joban Expressway, exit Ushiku or Tsuchiura; If you have a Japanese GPS device, you can enter the phone number 029-889-2931 as the destination.

By train: from Tokyo Ueno Station with JR Joban Line Tsuchiura Station, then 10 minutes further to Ushiku, from there about 30 minutes by bus (Attention, the last bus leaves already 16 clock back) A visit to Ushiku Daibutsu – we liked it!