Katharina Spieß is a professor of family and education economics at the Free University of Berlin and responsible for education at the German Institute for Economic Research. It calls for investments against child poverty. 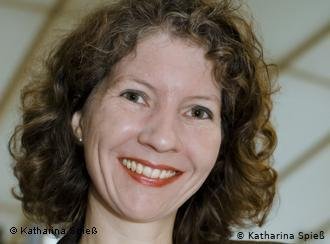 DW-WORLD.DE: Prof. Spieß, how high is child poverty in Germany?

Katharina Spieß: Child poverty in Germany has increased if we look at the period of the past ten years. Child poverty is particularly high among single families. In 2008, for example, for single parents who have a child under three years of age, a poverty risk rate of almost 55 percent. In contrast, families with so-called couple parents are much less affected by poverty. The poverty risk rate is a comparison "just" 15 percent. So there is a wide range. The really difficult group that is at high risk of poverty are single parents.

What does child poverty cost society?

It costs society a lot. If you remember that some of these families are Hartz IV recipients, these are direct costs. But there are also very many indirect costs, because we know that some children who grow up in poverty cannot do as well in education as other children because of lack of material resources or other support services. It also costs society, the economy, a lot in the long term, because we cannot optimally use the human wealth of these children.

What exactly do you mean by "Human resource"?

When I ask them to invest more in human wealth, I mean that every child in our society is also an important factor for the economy. If we e.g. Speaking of a shortage of skilled workers, when we say that we have declining numbers of workers, we need everyone from this perspective alone – and we need well-trained people in particular. If we deny children the chance for a good education and training or if we can only reach them less than optimally, then we are actually wasting human resources.

Many politicians say, we just don’t have enough money at the moment to invest in helping disadvantaged children. Is that a reasonable argument??

No, from my point of view that’s not a reasonable argument, because it only draws at very short notice. We have to think in the medium and long term. But of course we also have to support disadvantaged children because we want to create equal opportunities.

We know from primarily Anglo-American studies that children from disadvantaged families in particular benefit greatly from really educational programs that are very expensive. The most famous study in the United States, the Perry Preschool project, has been running for over 40 years. There, 123 children were observed to have had a group that had extremely good early childhood education and care and a control group that did not. It can be observed that children after 40 years actually earn higher incomes if they were in this good educational care, that these children have less care dependency, that these children have a lower rate of delinquency and that these children also do better in terms of health. All of these are medium to long term effects, where you know that early childhood investments are in a quality Pedagogical care and educational quality are actually worthwhile, especially for children from disadvantaged, socio-economically poorer families.

How high "interest" the money that is invested in supporting disadvantaged children?

If it is an educational really good Program is what is really aimed at these children, it is definitely worth it. There are very different bills, depending on the program. There are estimates that we have a cost-benefit ratio of 1 to 2, or 1 to 10 to 1 to 17, which is the highest level. The fact is that all cost-benefit analyzes actually indicate that the benefits far exceed the costs. However, only if we also have a medium to long-term perspective. What some studies do not do, but what we also have to involve is that these care facilities are of course not only of great value to the children, but often also enable both parents to work. We also achieve short-term effects: namely that these parents can actually earn a higher income than without these educational and care facilities.

You don’t understand why not much more is invested in this area. How do you explain that?

I think that’s because the yields aren’t that high in the short term. As we all know, the political election cycles are relatively short. For a chamberlain who thinks every four or five years, or for other political actors, it is returns that can only be achieved in the long term. And this is always a little more difficult than if you can immediately realize its benefits.

To what extent should the economy be interested in combating child poverty?

The interview was conducted by Andrea Grunau.
Editor: Hartmut Lüning