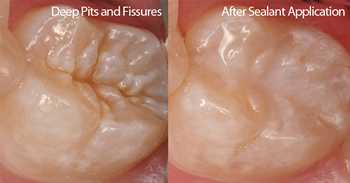 Is a fissure seal useful?

Many patients ask this question. to Prevention of tooth decay is a fissure sealing absolutely sensible.

Caries is still one of the most common diseases of the population. Particularly at risk here are the Chewing surfaces of the large permanent molars (molars) in the years immediately after tooth eruption. These teeth have very many so-called fissures. As fissure the dimples in the occlusal relief of the posterior teeth are called The teeth usually have a main fissure, which runs in the longitudinal direction and is therefore called longitudinal fissure. Similarly, the many smaller transverse fissures are called transverse fissures. Since these fissures are difficult to clean, a fissure seal is useful for preventing tooth decay.

Preventive sealing (fissure sealing) is intended to protect food particles from lodging in the depressions of the tooth, where they are poorly removed with the toothbrush, and carious bacteria present on the tooth surface provide nutrients for acid production. As sealing material at the fissure seal have become light-curing thin-flowing composite materials Acrylate-based (plastics) proven to which partial fillers are added, of which in turn release some fluorides, which are to inhibit the development of tooth decay.

How does the process in a fissure seal?

To seal the fissure is the goal of this treatment, which is why already identified fissures are sealed with a selected material.

Thereby can bacteria about this fissure do not penetrate the tooth and then lead to tooth decay. Important for the process is the fact that the selected material does not adhere effectively to either smooth or damp ground.

Therefore, the surface of the tooth is thoroughly cleaned and then completely dry. This can be done with sensibly placed cotton rolls or alternatively with a rubber dam. Both prevent the saliva from reaching the tooth and thus moistening it. For the fissure seal the tooth enamel is now treated, so that in return a slightly roughened surface is created.

Only then can the necessary material for fissure sealing be applied to the tooth. Depending on what material is chosen, comes focused Light as a fixative used, which is aimed directly at the tooth. This is followed by a check of the chewing surfaces, possibly existing bumps are remedied by a polish. The final step, if you want to seal a fissure, is then to fluorify the tooth. The entire fissure seal takes about on average 15 to 30 minutes. For pain patients and children should be interesting to know that the treatment is painless. But especially children should be prepared for keeping their mouths open during the treatment.

Which materials are used for a fissure sealant??

With the help of plastic can be a fissure seal, as a rule, this is up dimethacrylate. Partly selected materials for the fissure seal also contain a fluoride additive, which should protect the tooth. In some cases cement is used. The material has the advantage that it has a higher fluoride release, but in turn is usually less durable and thus could flake more quickly.

Side effects are to be expected?

Normally, no side effects can be expected. The German Society of Dental, Oral and Maxillofacial Surgery (DGZMK) has documented only two cases of side effects in the form of allergic reactions worldwide. Considering how often a fissure seal takes place, that is, an absolutely negligible occurrence. Some institutions warn against the use of plastics because they would release formaldehyde and monomers.

Here, too, the DGZMK has announced that these quantities are so low that it would not lead to any health impairments if the seal is applied correctly.

Seal the fissure: and afterwards?

Sealers usually hold about seven to ten years. Sufficient protection is only possible if they are really intact. It can not be ruled out that some sealings will partially peel off. If this happens, it usually happens within the first half year of treatment.

It is therefore advisable that you visit the dentist’s office. med. dent. Thomas Petersen in Bonn arrange an appointment for the follow-up examination. Even apart from that, of course, appropriate seals are checked at the respective routine examinations, which should take place at least once a year.

Would you like more information about the fissure sealing? We are happy to assist you and send you information material.