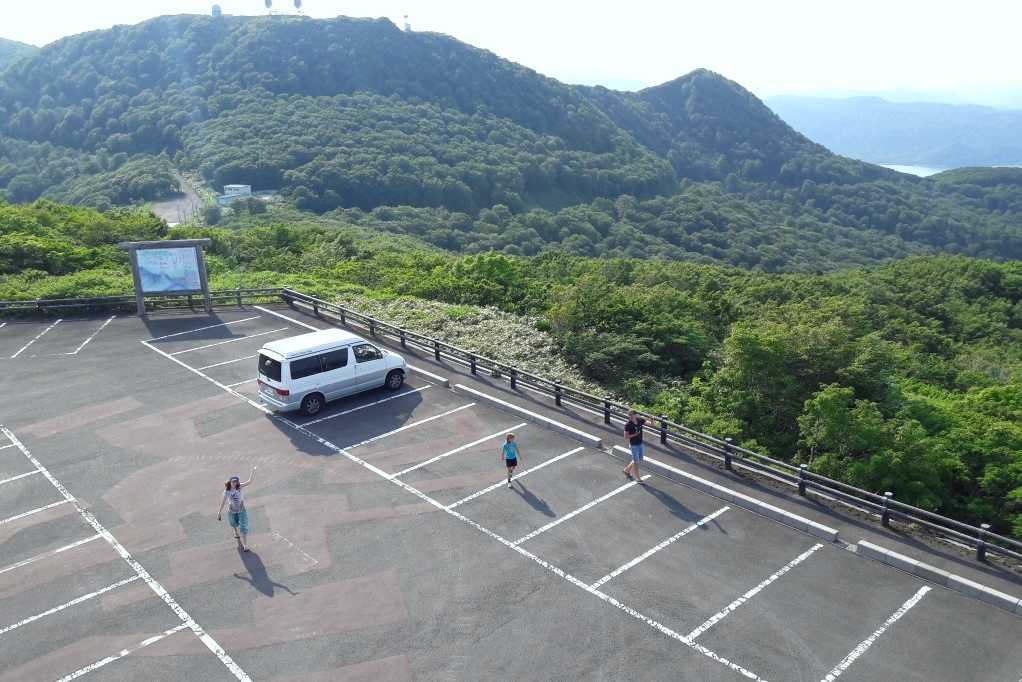 Our second trip through Japan, with three children in Campervan, took us through Tohoku: the sparsely populated and little known north of the main island of Honshu. Our itinerary through Tohoku was rather accidental – but was in retrospect just the right one.

With the campervan through Tohoku – to the very north!

21 days we had time to discover the north of Japan’s main island; After deducting a day of arrival and the last three days for our favorite city of Tokyo still remained 17 days.

We covered about 2,300 km and paid only three tolls (for the long stages from Narita to Nikko and back from Lake Inawashiro to Narita). We stayed at Michi no Eki (the Japanese rest areas especially for car travelers who sleep in the car), at play and sports fields and on beaches.

For descendants we present you our itinerary through Tohoku now! 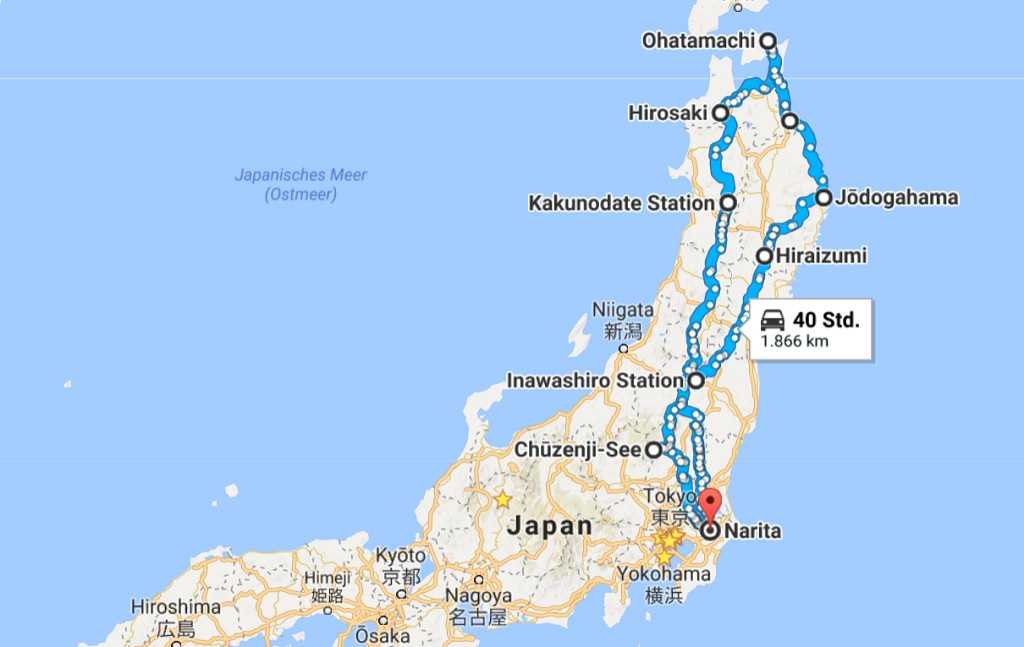 Road trip through Tohoku – the basics

Tohoku means the entire region of the main island Honshu, which lies north of the capital Tokyo. It covers six prefectures (something like city circles) and has both a west coast on the (calm) Japanese Sea and the east coast on the Pacific – the very one in March 2011, just a few days after our stopover in Japan Earthquake in the history of Japan and the tsunami was so terribly devastated. Almost all of the more than 15,000 dead died in Tohoku at that time, and even today the tsunami remains omnipresent. 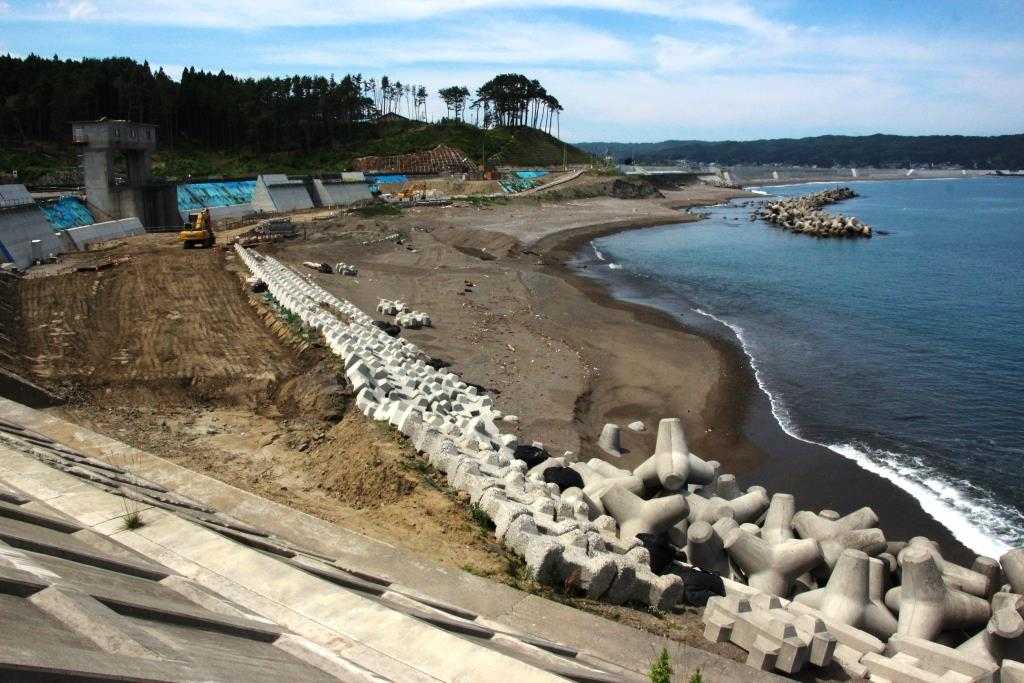 And yes, also the notorious one Fukushima (emphasis, by the way, on the second and not on the third syllable!) lies here; About 80 km from Sendai, one of Tohoku’s largest cities.

Surprise: The city is again 80 km away from the nuclear power plant Fukushima Daiichi and is also separated from it by a mountain range – in the city itself so nothing happened then, and even today it is a normal (and tourist rather uninteresting) Place we just drove through.

(Interesting for disaster tourists: The evacuated red zone of 20 km around the damaged nuclear power plant may still not be entered, but since the spring of 2017 you can drive through: on the re-commissioned Joban Highway No. 6, the in just six kilometers away from the Daiichi nuclear power plant, which is supposed to be much lower than on a long-haul flight …) 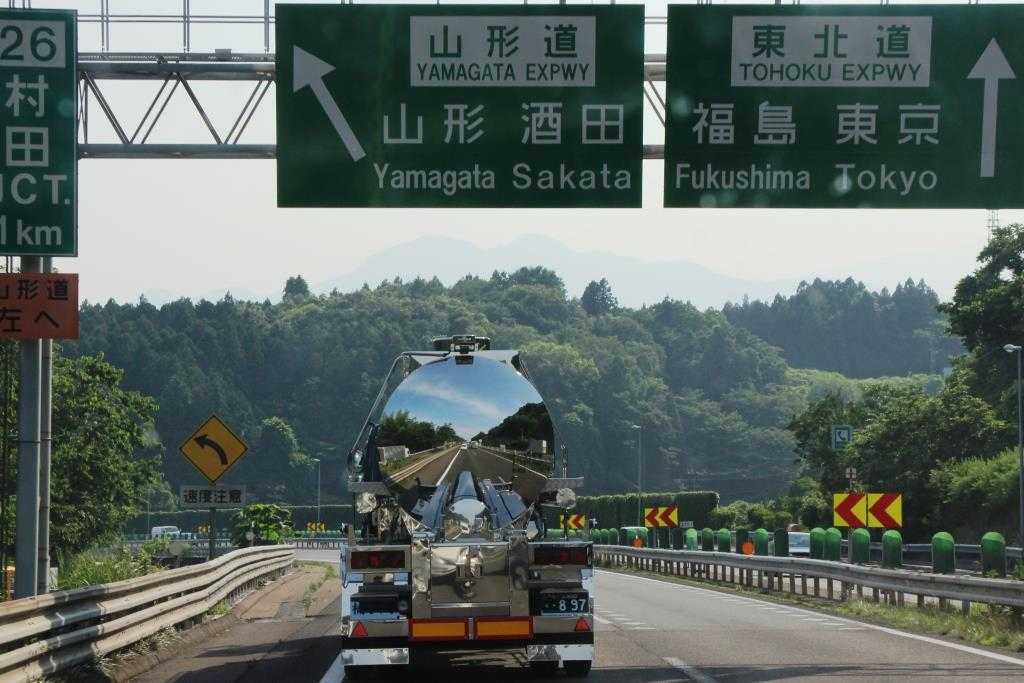 The proof: We drove through Fukushima. Do you find the campervan in the picture?

More interesting for travelers are the long history and wild nature of the Tohoku region. I do not want to bore anyone here and refer to the guide or good old Wikipedia for details; In any case, the many small towns, where you can follow in the footsteps of the Samurai warrior and their families, the great Temples and shrines and the sweet little villages between endless rice fields and (surprise!) apple orchards, but also the great ones Pacific Beaches in the north Tohokus, the wild mountains with its beautiful lakes and not least the many Onsen – because the mountainous area is home to so many volcanoes!

Tohoku per campervan: you have to know that

Unlike the south of Honshu (ie Kanto and Kansai), the north is sparsely populated. There are fewer train connections and – for us more important – less large highways where you would get ahead quickly by car.

The mountains, which pull Tohoku along its entire length, do the rest to the well kept, but narrow and sometimes very winding roads that lead through tens of small villages: Here you have to drive slowly and should not be in a hurry. 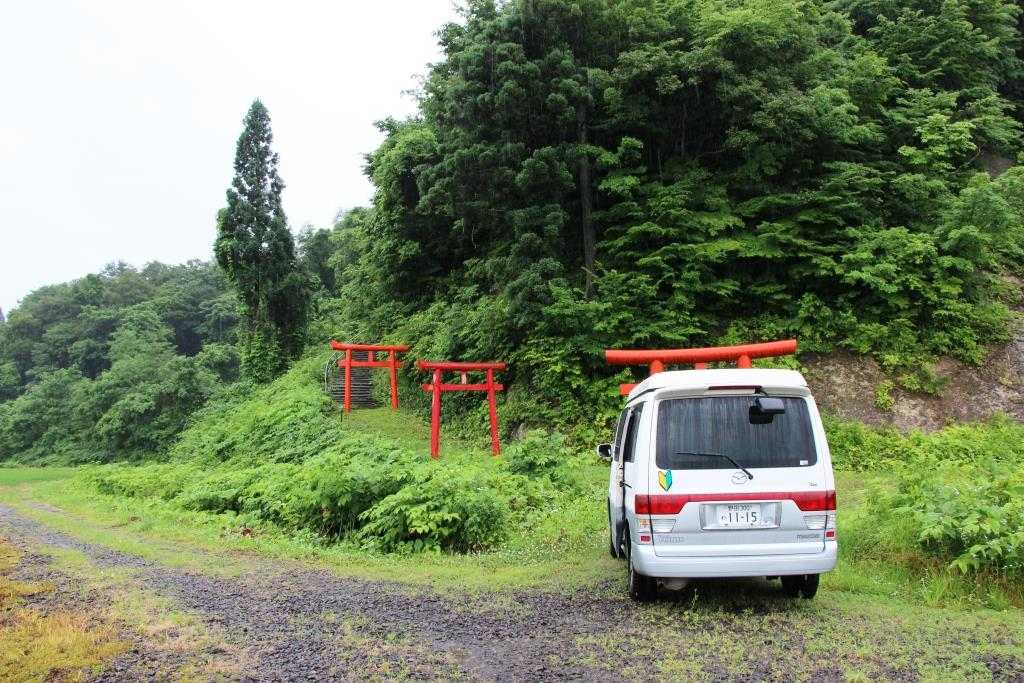 Who drives through Tohoku should not be in a hurry …

There are also free rest stops (“michi no eki”) in Tohoku, we never had a problem finding a parking space for the night. It was less easy to find an onsen in the northeast of Tohoku – there are simply no onsen there, and that’s stupid for campervan travelers looking for a laundrette.

Even worse, after we left Aomori on the northern edge of Honshu and drove the even more northern Shimokita Peninsula, we also found no washlets in public toilets more in front – for some a luxury problem, but the daily Po-cleaning saves the Campervan traveler so much total laundry (and is just very pleasant, if you got used to it).

And worst of all, honestly, north of Aomori and the entire east coast, up to about the same level as Miyako no 7leven markets more. Although there is no shortage of 24-hour open mini markets (there are Lawson, Familymart, Daily Yamazaki and what they are all called), but withdraw money with credit or debit card can be as non-Japanese only at the vending machine in 7Eleven!

So if you’re traveling to northern Tohoku, get plenty of cash in Aomori before continuing! 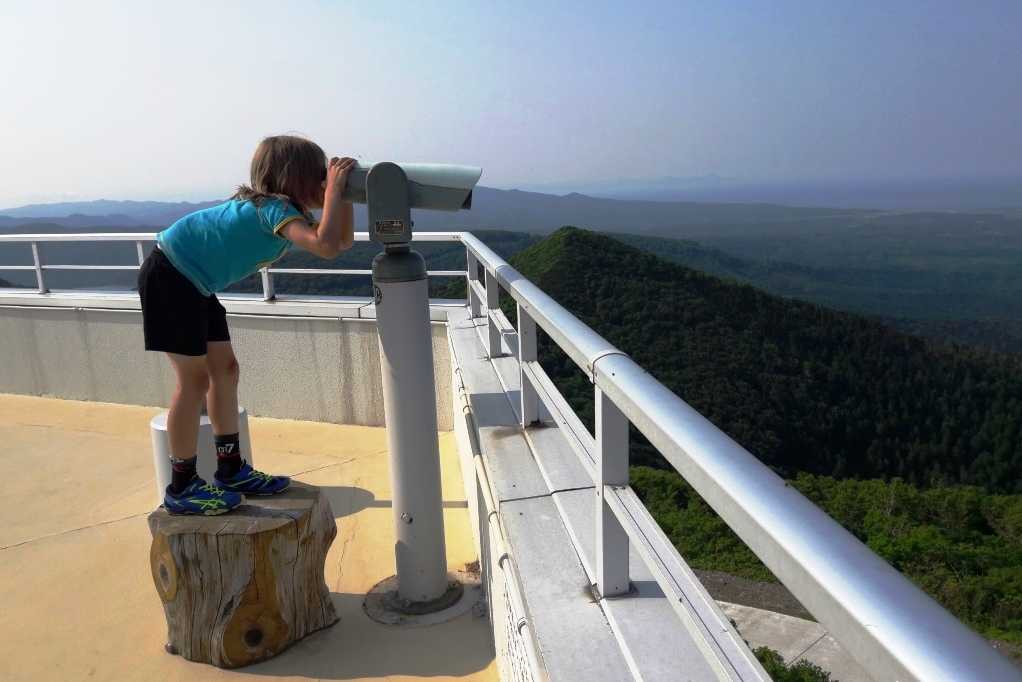 Arrived in the north of Tohoku: On the Mt Kamabuse

Our itinerary through Tohoku in Campervan

The starting point of our campervan tour through Japan this time was not Tokyo, but the 60 km away Narita – there is the office of JapanCampers now housed and there you can also stay one night for free, if you like (we liked).

If you are smart, book your flight to Japan so that it lands in Narita. After our landing in Haneda we drove another 1.5 hours with the Keisei Line to Narita, tralala.

From Narita (which is a very worthwhile little town, which we already looked at in 2011) we started in the direction Nikko (which is about 140 km north of Tokyo, but not quite in Tohoku). After a stopover at the third largest Buddha in the world, the Ushiku Daibutsu, We stayed at Lake Chuzenji, 1,200 meters high, and looked at the world famous temples the next day. 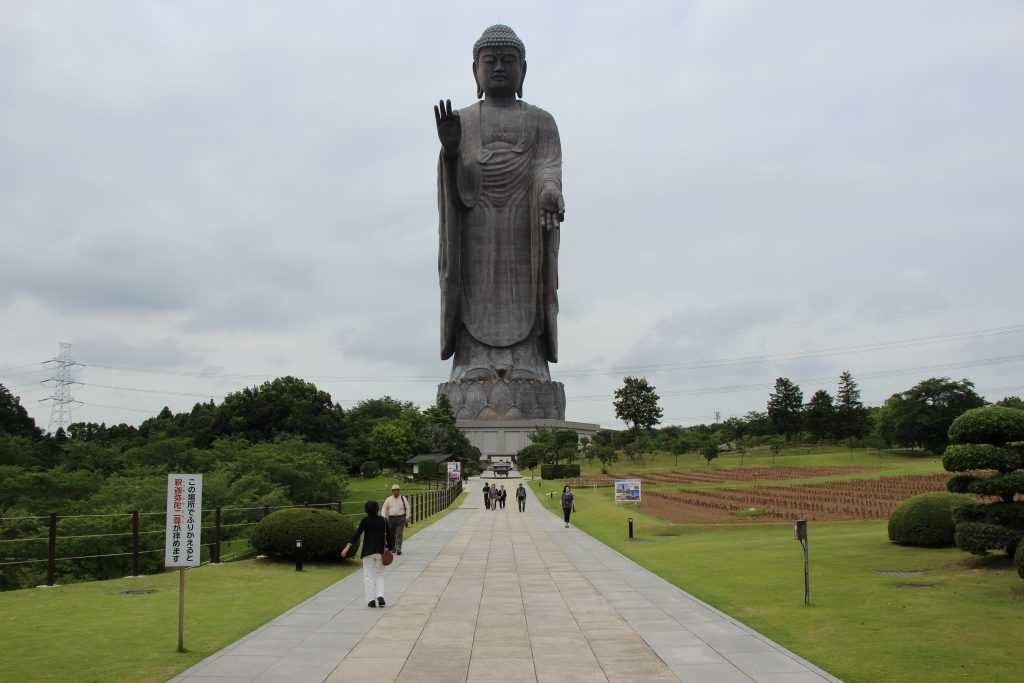 The third largest Buddha in the world is … tall! Nikko: not what we expected …

From here we went to the samurai city Aizuwakamatsu, only half an hour west of the beautiful Lake Inawashiro is where we stayed another night. Farther north we fought the mountain roads of the Bandai Asahi National Parks, made a detour to the Five lakes and giggled about the monkeys, who squatted again and again on the roadside. 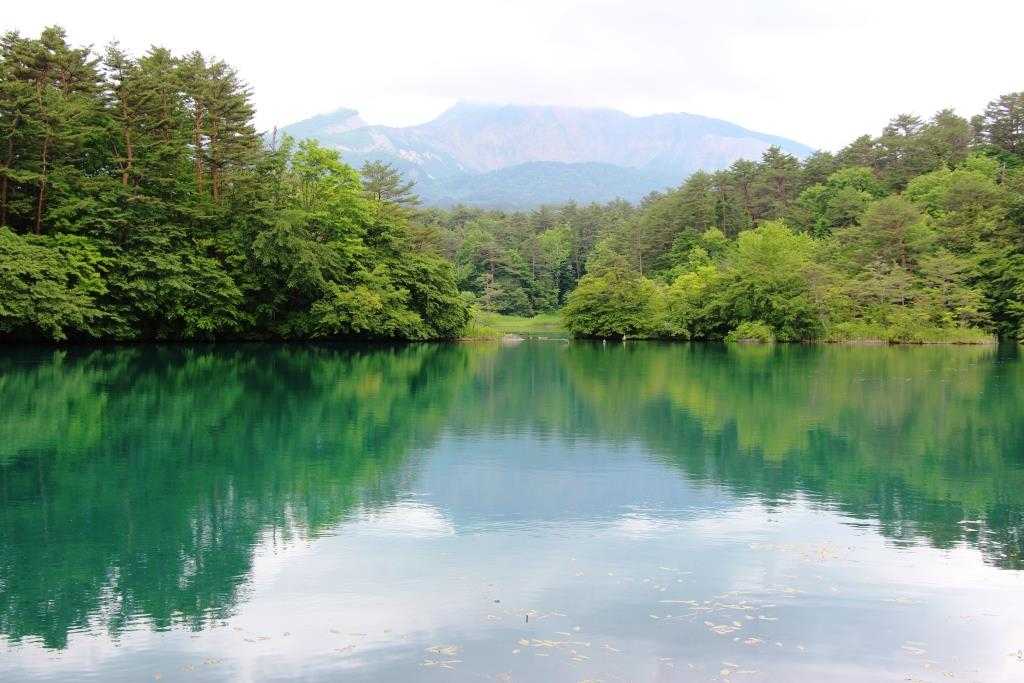 The Five Lakes in Bandai Asahi National Park (one of them)

Our next destination (after a stopover somewhere at Yamagata) was the small one Kakunodate, also an old samurai town and lovely to stroll through. Weekends are probably crowded with crowds (the streets and parking lots are wide enough), we strolled almost alone among the beautiful weeping willows. From here we drove on to the small but deep Lake Tazawa, with over 400 m of Japan’s deepest lake, which impressed us even more deeply with its squeaky blue, extremely clear water. 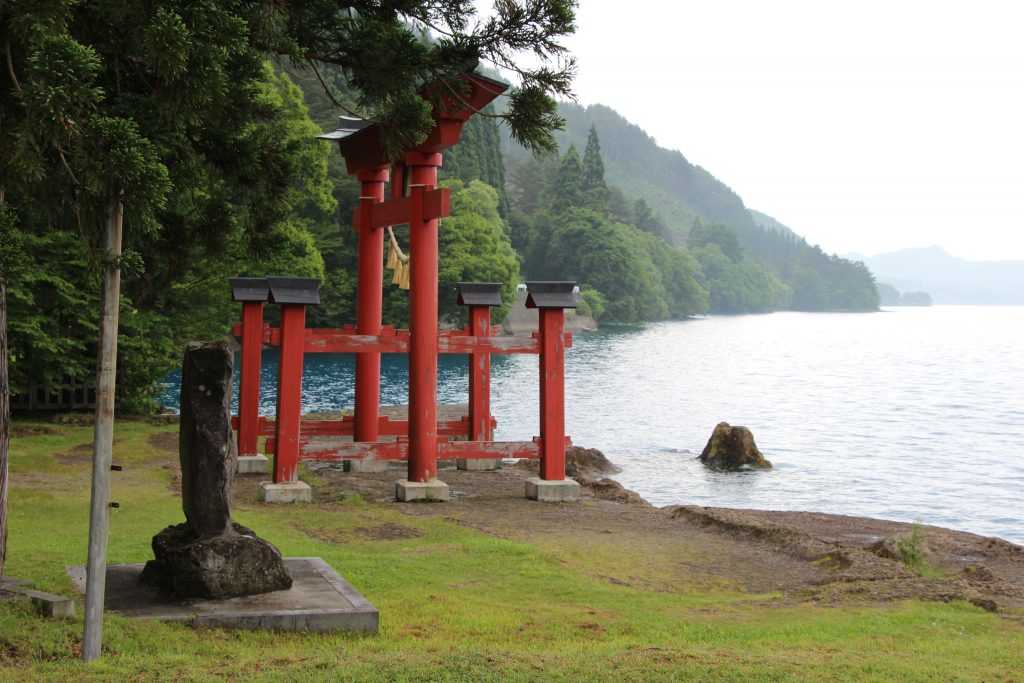 On the north shore of Lake Tazawa 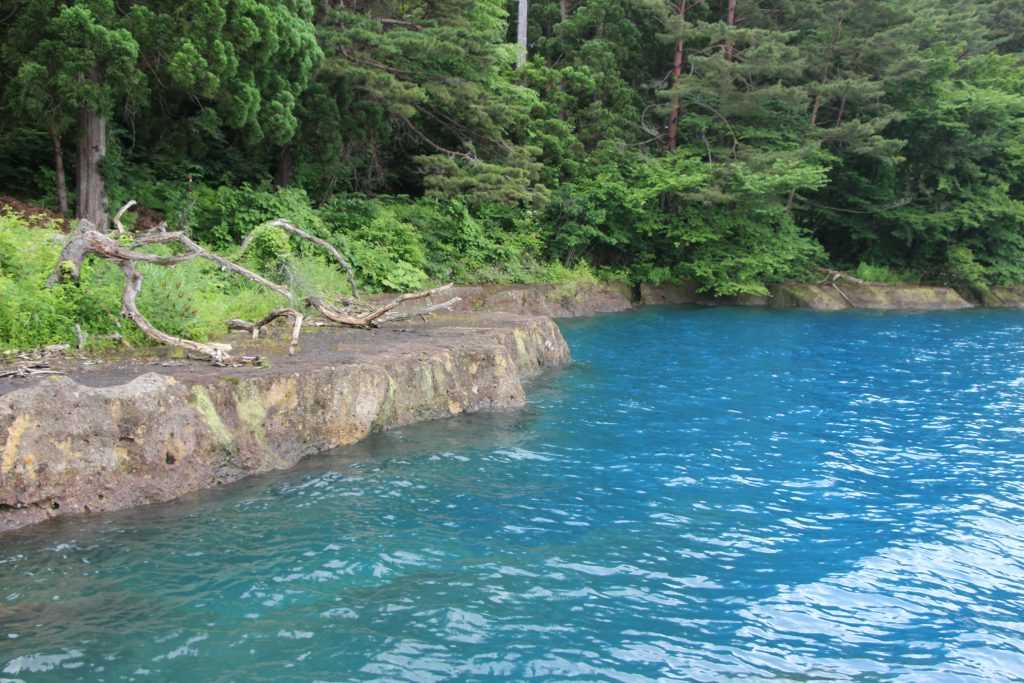 I have never seen so blue water …

The town Hirosaki, Famous for its “crazy” castle (which is being moved from A to B) and the apple orchards, unfortunately we got caught on a rainy day. After a half-day flying visit, we quickly turned our backs and drove on Aomori – where we knocked on the shoulders, because we had made it to the very north!

Even further north is only the Shimokita Peninsula, a small peninsula in the form of an ax, which we explored in the next few days. In memory of us remains above all the Osore-zan, Japan’s third sanctuary and the entrance to Buddhist hell. And of course the Pacific! On the Shimokita Peninsula Fresh scallops, straight from the sea!! Osore-zan: the hell of the Buddhists (although quite hot and sulphurous, but hellish …?)

We enjoyed it even more intensively after we headed south again on the eastern edge of the Peninsula, not without the aircraft museum next to US Air Force Base in Misawa to have stopped by (great recommendation!).

Our highlight in summer in Japan was the Shirahama Beach in Hachinohe – a coincidental discovery that we will longingly remember. In the north the Sanriku Coast is beautiful ♥

After that, it was pretty depressing, because now showed at the Sanriku Coast More and more traces of the tsunami of 2011 after we got to Miyako from the Pinterest-perfect cliff beach Jodogahama were disappointed, we rattled off one ruined bay after the other and finally shaken off in Yamada from the coast – here we did not want to continue, as planned, further south to Sendai. The Sanriku Coast was massively destroyed by the tsunami in 2011 …

Inland, the adorable rural idyll around the town was waiting like a much needed remedy Tono on us, where we went hunting for Kappa water goblins. Are not they cute, the kappa ghosts?

Even better was Hiraizumi – a cute little town with a historic UNESCO World Heritage city center, an equally valuable temple complex and an environment full of blue flowering hydrangeas, colorful mallows and lush green rice fields, which enchanted us smoothly.

From Hiraizumi it was then, as we found, not so far to the Lake Inawashiro – where we made our children happy by spontaneously taking another day break and bathing fun. If you are in a hurry, come back from Inawashiro in one day Narita – It just costs tidy toll if you want to use the highway via Fukushima. So we enjoyed one last time onsen delights in a super chic hotel onsen, once again waved to the world’s largest Buddha and then returned with a tear in the buttonhole our campervan – thanks, JapanCampers!! Traveling through Japan in campervan – always happy to travel!

Fortunately, our trip to Japan was not quite over yet: three very happy days followed in Tokyo before we had to get back on the plane back home.

Sayonara, Nihon – we’ll definitely be back!

Disclaimer: JapanCampers supported us with a discount. Our opinion remains unaffected.