Final trip to the district museum in Syke

Children get to know "old craft" 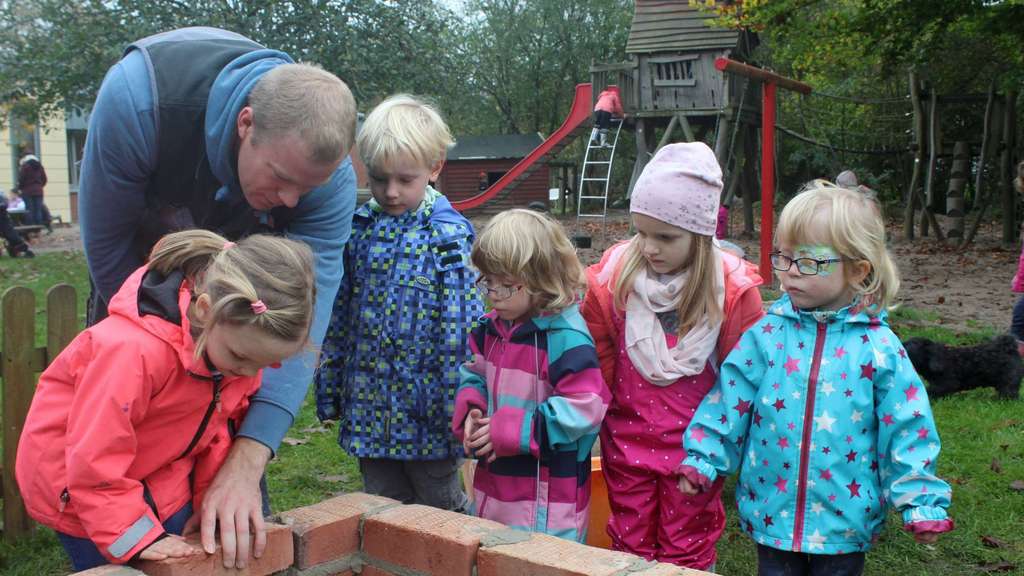 Br.-Vilsen – By Vivian Krause. In the Löwenzahn kindergarten in Bruchhausen-Vilsen, the artisans shook hands. Three For weeks, the children and educators received some artisans or visited them at work. The background was the "Old craft" project.

The educators Britta Meyer and Nadine van den Broucke, together with the facility manager Anja Marcks, led the program. Together with the other employees of the kindergarten, they let their contacts play and thus got some craftsmen who bring the children closer to their work – from a rope maker to a potter and a tailor to a harp maker. “We educators always learn something new here,” says Nadine van den Broucke.

she shows responsible for an exhibition in the entrance area of ​​the kindergarten. Old tools can be found there. Junk dealer Hermann Meyer from Bassum-Bramstedt made this available free of charge. You can discover a butter churn, a cheese squeezer or an iron in the separate area. Not only the children are impressed by the old equipment. "Some grandparents look at this when they pick up the children and recognize some things," says the educator. “When it came to the butter churn, the children first thought it was a toilet brush holder,” she adds with a smile.

The 16-person team at the kindergarten started planning the project weeks in February this year. “When planning, you sometimes don’t even know where you’re going,” says Anja Marcks.

The project weeks started with the visit of two ropers. Klaus Müller and Georg Becker from Süstedt showed the children how ropes are made. These are now in use by the children, for example for jumping rope.

Isabella Veninga made a blouse together with the kindergarten children in her tailoring in Bruchhausen-Vilsen. The children cut fabrics for this. Hairdressers from the Klier hairdresser in Bruchhausen-Vilsen explained their craft to the children. Then they showed it in practice – they put make-up on the boys and girls, braided their hair or made highlights.

When visiting the mill in Bruchmühlen, the little ones got to know the craft of grinding. "The waterwheel was thrown on," says van den Broucke. The volume impressed the children as much as the special atmosphere in the mill.

The girls and boys of harp maker Lutz Bönisch from Wachendorf learned which trees harps are made of and how they sound. A mosaic now adorns two tables of the kindergarten. The children designed it together with tiler Marcus Neubauer from Bruchhausen-Vilsen. Pottery on a potter’s wheel was also new territory for many. The vessels made together with the Eystruperin Audrey Lange can be bought at the upcoming kindergarten Christmas market.

Marius von Beckerath from Weseloh showed the children the craft of forging. He is an educator in the Bruchhausen-Vils kindergarten. Erich Drewes from Bruchhausen-Vilsen introduced the kids to the art of basket weaving. The project weeks ended with a visit to the district museum in Syke. As with other excursions, the 111 kids did this in groups. Some baked bread on site, the other made butter.

The excursions are both prepared and followed up, explains Anja Marcks. The book "Altes Handwerk" by Gudrun Sulenbacher helps the employees. That was the only one on this topic that is suitable for children. "This shows that the topic should be reprocessed," says Marcks.

"You cannot offer this diversity within the family in this context," says the head of the kindergarten. It is important for the educators to keep the tradition alive through such a project.

In the coming year, the kindergarten will probably deal with the topic of the “Middle Ages” and its results will be shown at the 800th anniversary of Heiligenberg in autumn.

The children will sell some of the products made during the project time at this year’s Christmas market. The kindergarten invites you to Friday, 24. November, on. Between 5 p.m. and 7 p.m., alongside numerous products such as soap, clothespin snowmen and bath salts, there is also a Christmas play by the teachers and music.