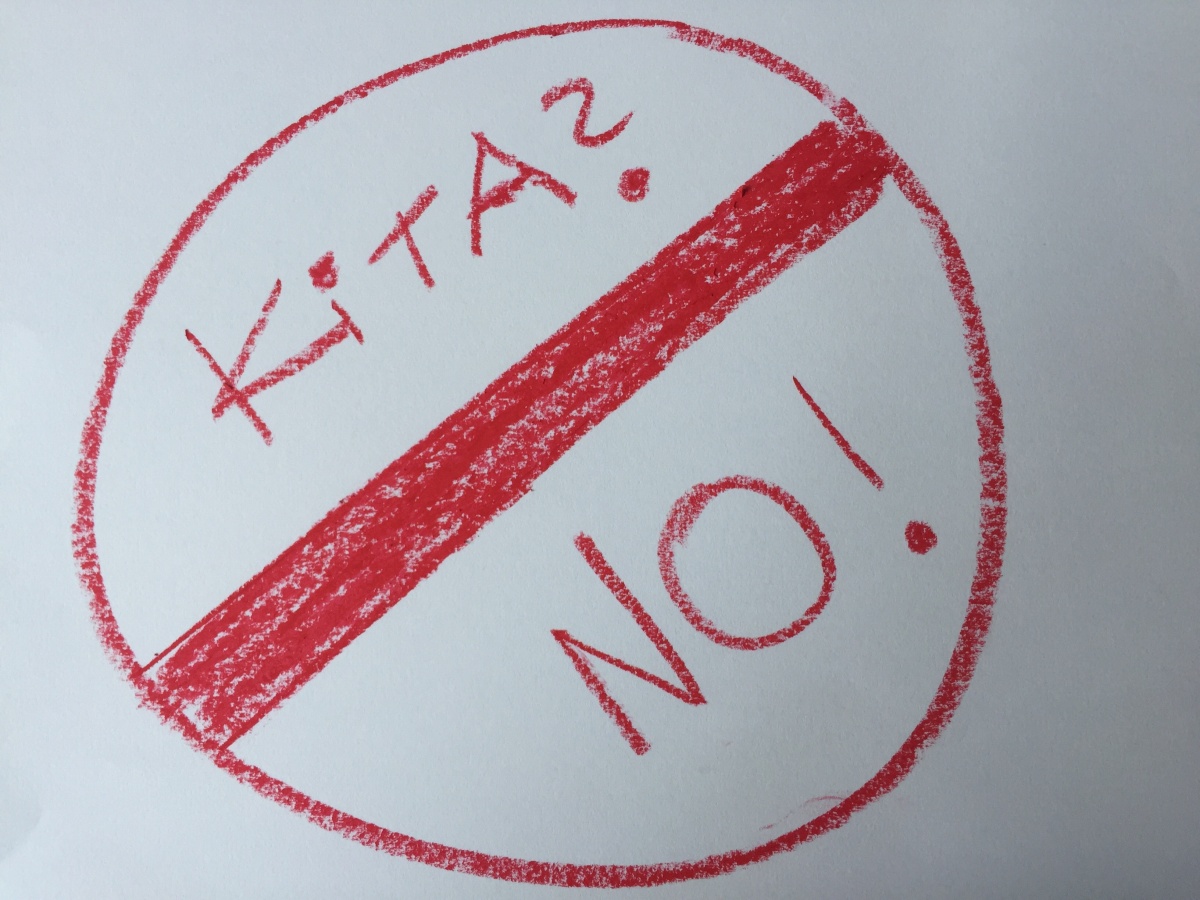 There are families who consciously choose not to look after their children in kindergarten. Who are those people?

The house where Shirley, 41, and David, 46, live with their two children Karlo, 6, and Rosa, 4, is on the outskirts of Berlin and looks a bit like the Villa Kunterbunt. Although there is no porch with a horse, it is a place full of colorful warmth, a little different from the others. There are posters with numbers and letters on the kitchen wall, and there is a huge family bed in the bedroom. And on the parquet in the hallway, someone stuck bouncy boxes out of colorful strips. In addition to the two small David’s 17-year-old daughter Lynn and her boyfriend Lucky have also been living with them for a few months. It is an open house.

And it is a house full of children, even now on a normal morning during the week. Because Shirley and David’s children grow up free of kitas. You haven’t gone to a crèche and are not going to kindergarten now. You’re at Shirley’s home. She is a "self-care worker".

I’m standing in the hallway when Rosa and Karlo (with pillows) come around the corner. Karlo calls: "Who can throw better?" Rosa: "Me!" Karlo: "Show off." Before I visit Shirley, I checked the blog intuitiveeltern.de, what that is exactly, a self-care worker. It says: "The new generation of mothers who look after their children themselves is not a generation of mothers at the stove who only cook, bake, clean all day and put the child on the potty.

It is mom and dad who love to be there for their children, answer questions and grow with them. This is pure self-fulfillment, quite demanding and anything but monotonous. It’s not just a matter of looking after, it’s about a very commitment-conscious way of life – which more and more parents are striving for. ”

But aren’t parents who send their children to kindergarten there for their children and answer their questions? Didn’t we just achieve with the daycare expansion that we can also work as mothers? And isn’t that incredibly exhausting when you have the kids around you 24 hours a day? When I sit down at the kitchen table at Villa Kunterbunt, I have a lot of questions. Shirley makes us a tea, puts a second breakfast on the table. And the way she does it with calm, unexcited movements already answers one of my questions: No, she doesn’t seem annoyed, not stressed. Rather very relaxed.

No rushing, no awakening, no resentment – a life without daycare

Later, when we bite our buns, she explains how much she appreciates that she doesn’t have to rush in the morning, can let the children sleep in and that they can have breakfast together in peace. For her, the kindergarten, says Shirley, is an “artificially created world with a homogeneous age structure: peers play with peers.” On the other hand, their children also deal with older and younger people, with neighbors, with dad’s work colleagues, with friends. "That’s why it’s nonsense when people think: Without a daycare center, the children won’t learn social skills."

In addition, says Shirley, she travels a lot with them. In the dinopark, in the museum, in the music lesson or library, in the forest or at the lake. "However, we usually take a day off after a day out."

The 18-year-old Lucky now comes into the kitchen, gets an apple, peels it. He has Karlo in tow and explains to him on the side, what a Putsch is: "The king is thrown from the throne and then. ". Karlo is all ears! "We tried a daycare center," says Shirley. “But Karlo was too loud there, too wild, too busy. All the rules, eating at fixed times, sleeping, going out – he much preferred to stay with his family. ”

Happy at home: "This makes me happier"

Shirley, who was working as a communications consultant in the advertising industry at the time, was very concerned: Would she manage to stay at home with a child and without her own income? Now she says: "Yes, it was a big change in the beginning. But today I am closer to myself and to being human than ever before. I don’t feel stressed or challenged. On the contrary: we discover the world together. And I have enough experience with the world of work to be able to say: Yes, this makes me happier. ”

"Let’s go marching, I’m the sheriff," says Karlo, who has now put on a hat. Rosa marches after: "I’m the boss, is that clear?" Does the ceiling never fall on your head here, I ask. And Shirley shakes her head. If she needs a change, go to trade fairs, weekend seminars or organize work groups. David then takes care of the children. However, there is little time for both of them at the moment. But that’s also the only disadvantage that Shirley comes up with as a self-care worker.

Recognition? Doesn’t need Shirley from the outside, not from a boss, she gets her out of her family life. Not everyone in their environment accepts the decision to look after the children themselves. Some friends have withdrawn – because they live very differently as families. "Or maybe because they see their own life plans questioned," says Shirley. “Many working parents are stressed out. But we have no time pressure.

Not a guilty conscience because the child cries when you give it away. No madness when it gets sick. That seems to provoke. "

"Caution bank robbery! Do not move! Quick, stunning him. ”Karlo and Rosa are in action. Now Lucky and Lynn are playing too. Anja, Steffi and Alex have announced themselves with their children for 1 p.m. – all self-care workers. They often make appointments – also because it would otherwise be almost impossible for their children to meet playmates "in the wild" by afternoon, because they are in the daycare. Competition among children? "There is almost no such thing. You don’t need to constantly extend your elbows to secure their place. You are safe, ”says Shirley.

Alex, 30, is there with Johannes, 1, and Marie, 4. Marie should be at the age of three at the latest, but then Alex met a self-care worker. At first she thought: “She’s crazy, the children need a daycare center to let off steam! And to find friends. ”But then she saw how happy this other life obviously made everyone. And it fascinated her more and more. At some point she wanted to.

A parent stays at home? You have to be able to afford that

In order to be able to "afford" self-care – there is no salary – Alex and her husband got rid of the car. Alex knows that many self-care providers top up with Hartz IV. She thinks it’s okay: "Even parents who don’t look after their children themselves take grants from the state for daycare."

Alex also launched the kindergartenfrei.org website. Self-care workers can network there. The network has around 1600 active members. Most of them are mothers, but Alex also tells of a dad whose wife said: "If you don’t want a daycare center for our child, you have to take care of it." And he’s been doing that ever since. The fact that the others often boiled down to a classic division of roles had to do with the fact that, unfortunately, the men still often earned more.

Raised Kita-free: How should it be later in school?

"King Dustin, what do you want from us?" Karlo calls into the kitchen and now also involves three-year-old Johanna. Johanna is the daughter of Anja, 34. She is a trained stage dancer and came across the daycare-free network after an unsuccessful familiarization with the daycare center. As they all imagine later on with school, I now ask: “The children have to adhere to many times and rules. Aren’t you afraid that this will be difficult? "

The four don’t. Many self-care workers later look for free schools where they can have a say – I find out. Some even emigrate to countries where you can teach your children yourself and at home. "I’m tired now, I want to go," says Johanna to her mom. She asks if they can lie down together briefly. "No problem," says Shirley.

Yes, self-determination plays a big role in her life. You and the other mothers have decided not to run in the rush hour of life and to phase out of the modern performance and efficiency society. You can find that brave. Or even particularly emancipated. But also short-sighted, naive, backward: Shirley and the others know this criticism.

External criticism of the "Helicopter hippies"

They know that some call them "helicopter hippies" and accuse them of overprotective upbringing. Or stamp as females who do not take economic responsibility for themselves. But they have learned to deal with headwinds.

"I know how working is – and I will be when the kids are older," says Shirley – and the others nod. "Only one thing," says Anja, she will never understand: "Why daycare fans always think that other people could raise our children better than us parents, that they love. "

Info box: THIS IS WHAT SCIENCE SAYS! In a twin study with 1200 children, the American psychologist Elliott M. Tucker-Drob found out that children who were cared for at home until they started school were just as fit as daycare children – if they came from households with an education. On the other hand, children from poorly educated families more often showed deficits than daycare children.

This report first appeared in the Eltern Eltern magazine.