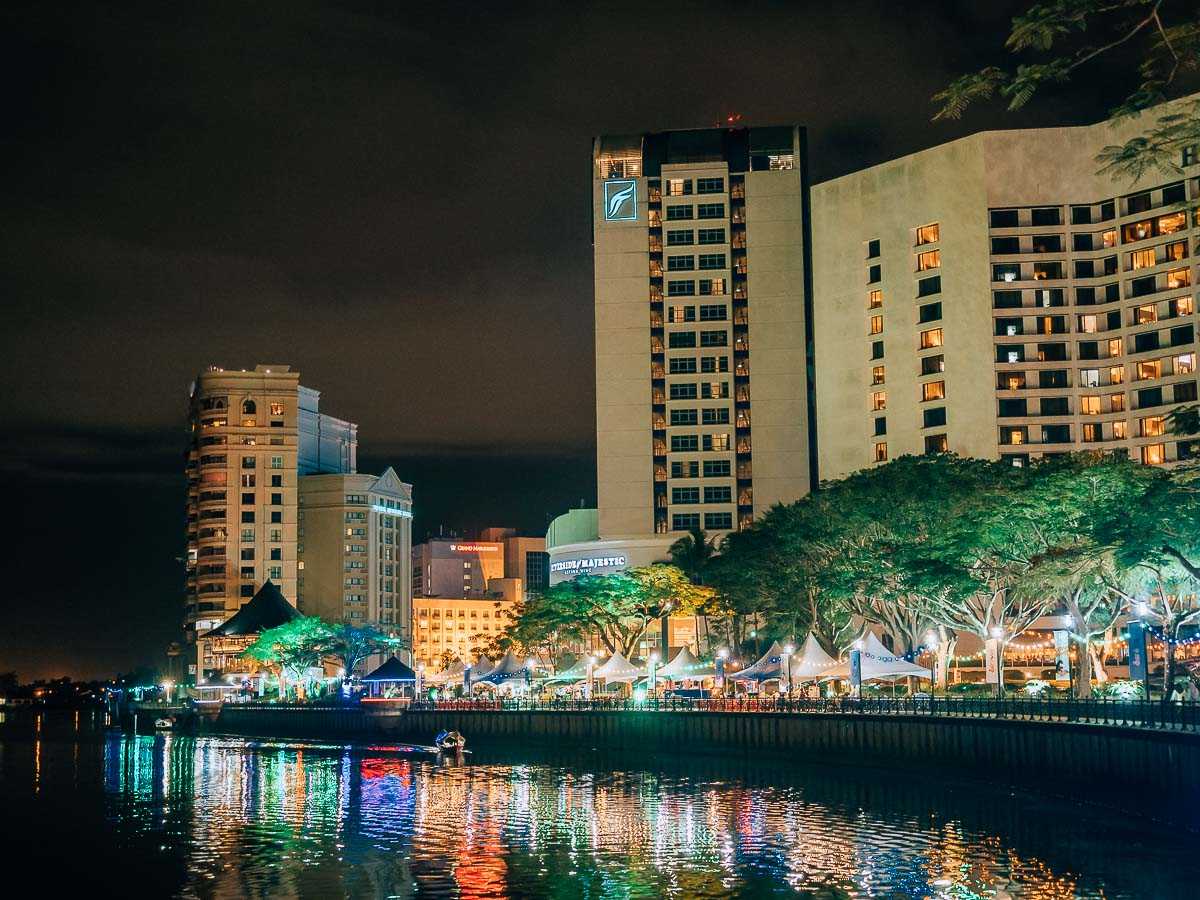 Kuching on Borneo – sights & Tips for the underrated city

Many travelers see Kuching on Borneo as a starting point only to visit the national parks in the surrounding area. At first we did the same! But then we realized that the capital of the Malaysian state of Sarawak has much more to offer.

In the end, we liked Kuching so much that we extended directly. We were totally surprised how colorful, cosmopolitan and beautiful this completely underrated city is.

So that you also have a great time in Kuching, you will now find in this post the best sights in Kuching, delicious restaurants, cool bars, trips in the area and many more travel tips. Have fun while reading!

More articles for your trip to Malaysia:

We start directly with the most beautiful sights in Kuching: Eleven we have looked at ourselves and now summarized for you. Since the city is also very untouristisch, no entrance fee is due for most highlights.

The big highlight in Kuching is the Waterfront Promenade, which runs along the Sarawak River, which flows through the middle of the city. Here to stroll along the water and enjoy the view, really worth it.

But it only gets really nice when the sun goes down and the promenade lights up in the most colorful colors. Especially at the weekend you will always find street performers, musicians or dancers who want to earn a few ringgit. Small market stalls are also being set up to offer drinks, food and accessories.

This creates a very special and romantic atmosphere at the waterfront. Every evening we sat on one of the benches watching the hustle and bustle – just great! 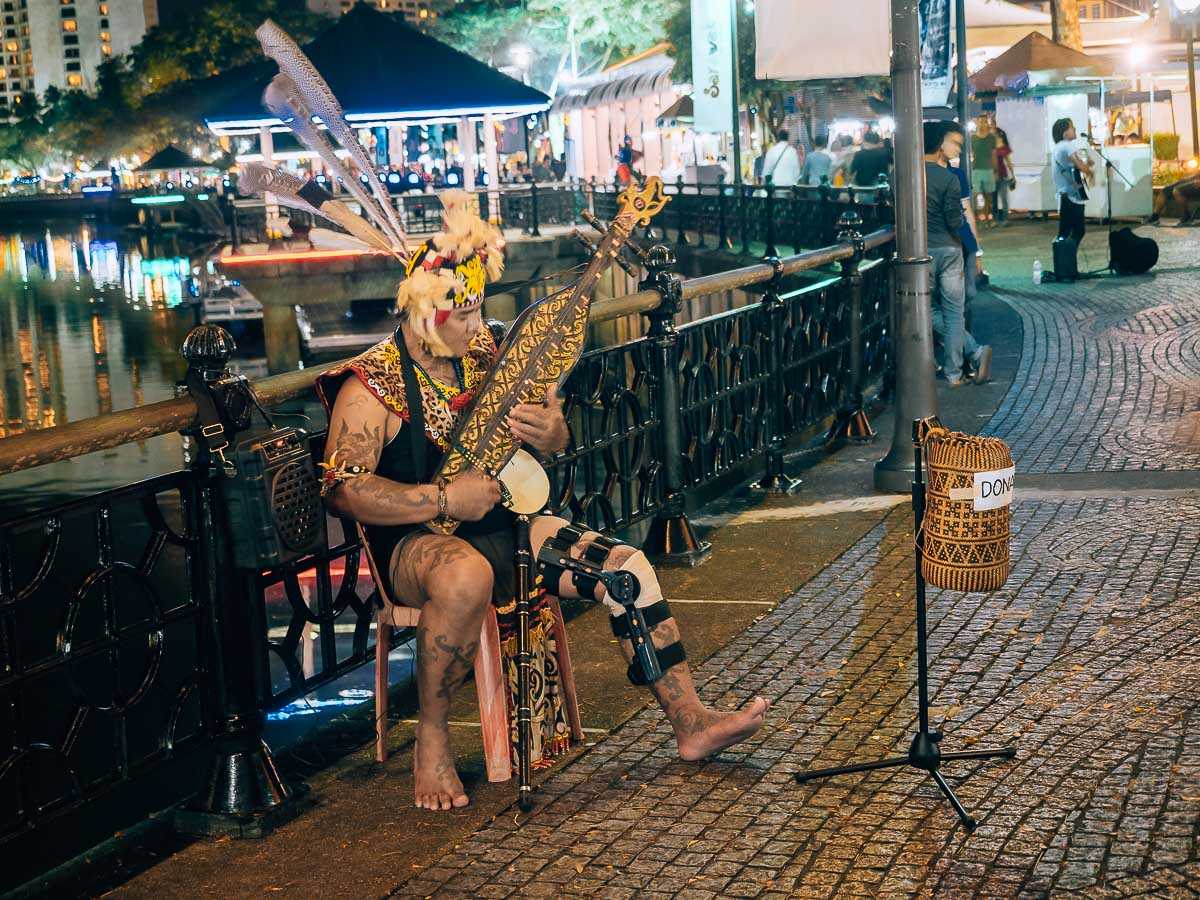 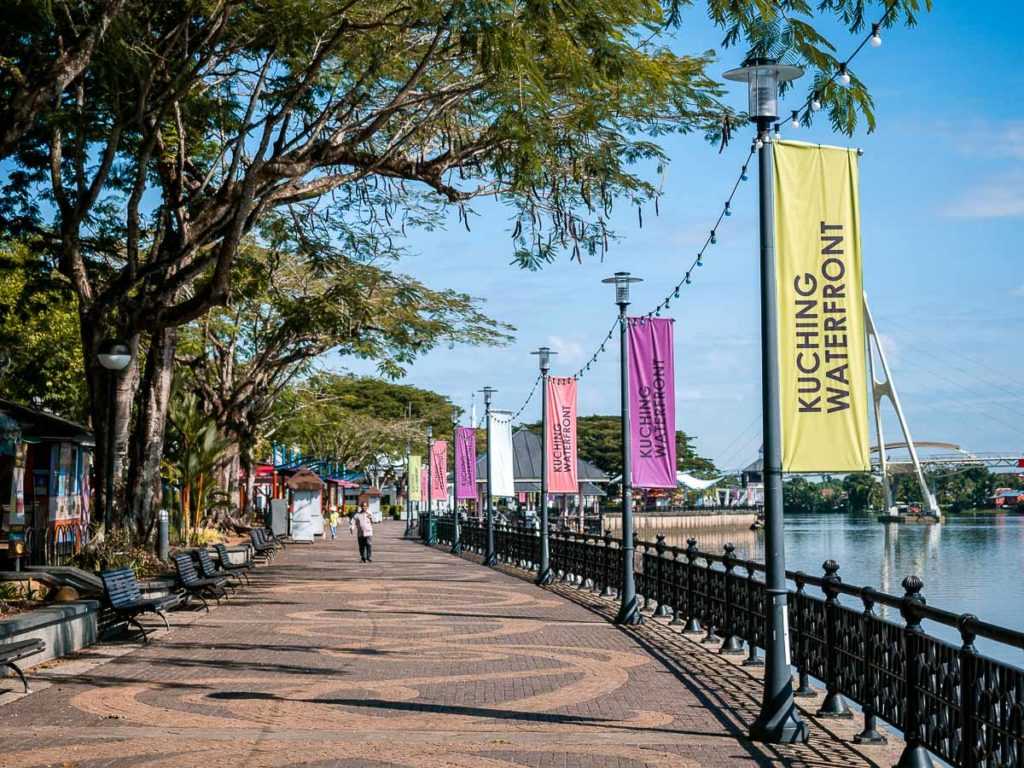 The Sarawak State Assembly is without any ifs and buts the most impressive building in the city. It is also the seat of the State Legislature of Sarawak State, Borneo.

From afar, you can discover the mighty building that was built on the other side of the river, opposite the Waterfront Promenade. Definitely a very impressive architectural style. Unfortunately, tourists are not allowed to visit buildings inside. 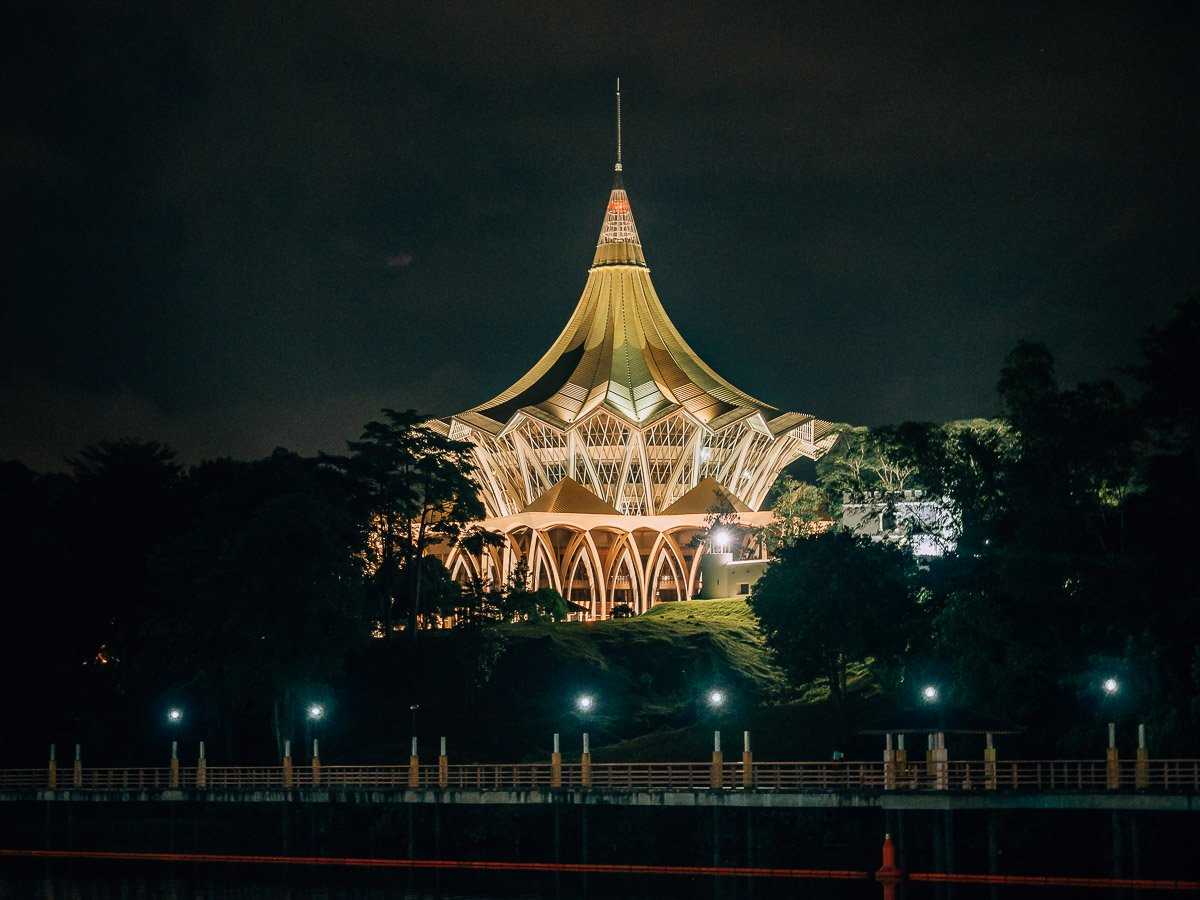 To the left of the Sarawak State Assembly you will immediately discover the very striking and modern Darul Hana Bridge. It spans the river, was completed in late 2017 and is now one of the main attractions in Kuching.

Make sure to make a detour to the top, as you get there a pretty hot view aufgetischt: in the south on the modern city and in the north on the more natural and original part Kuchings – mega beautiful!

Oh well, before we forget it: Even the bridge shines in the dark in countless different colors. 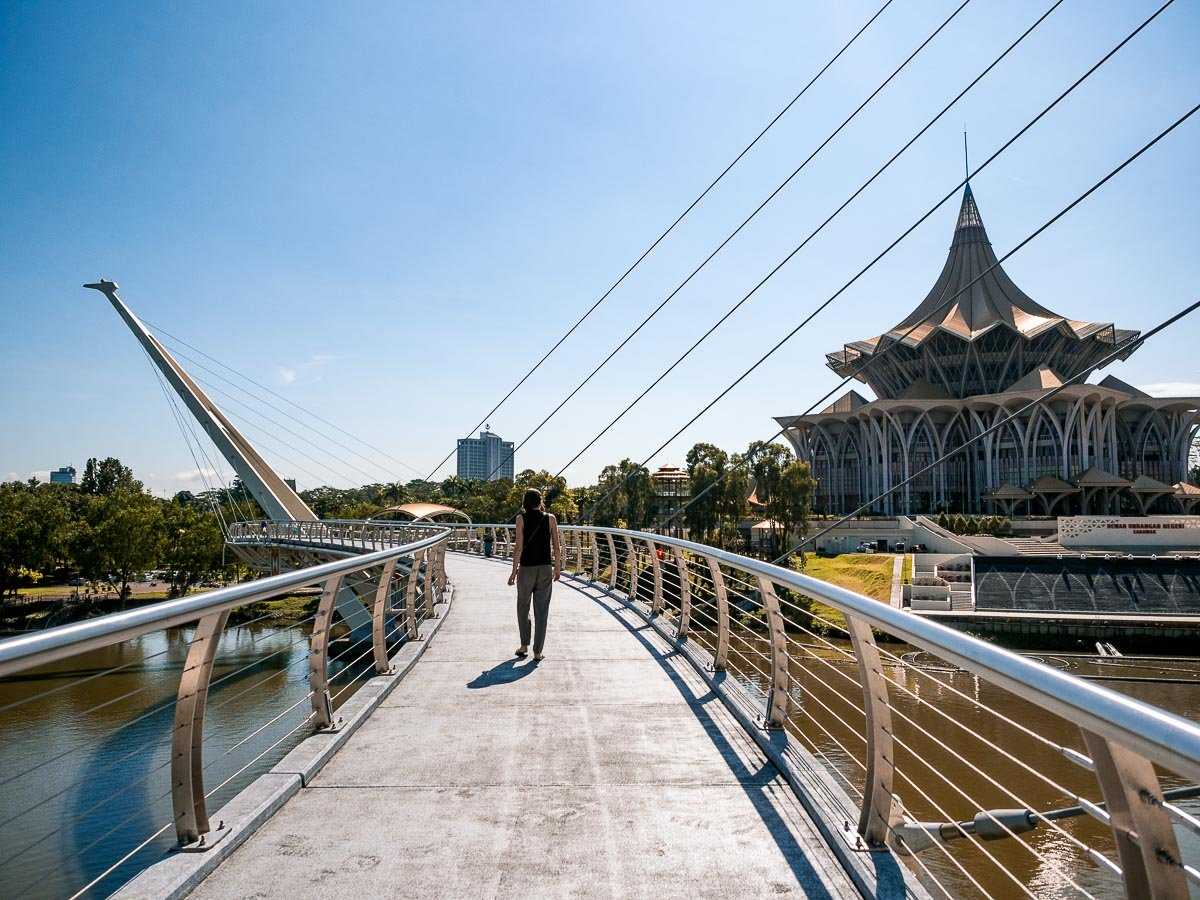 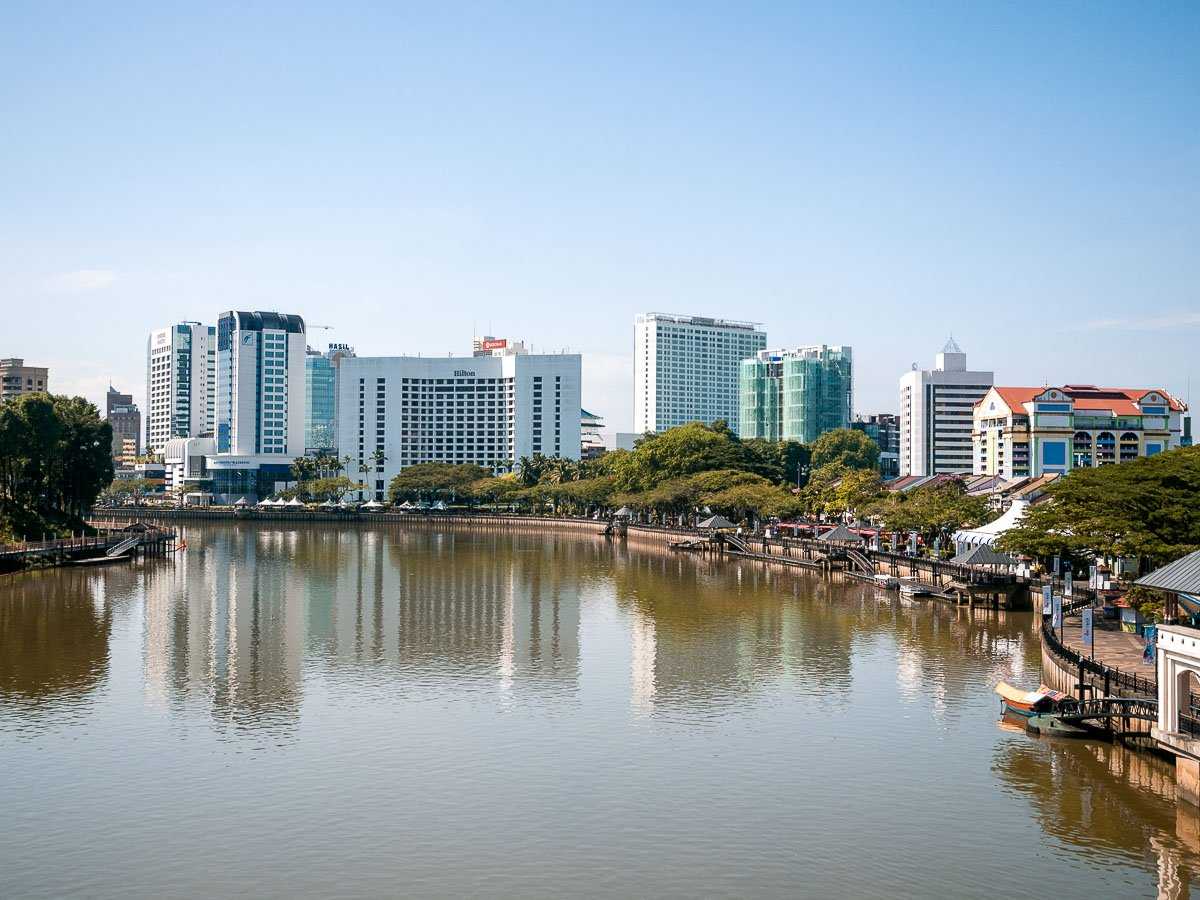 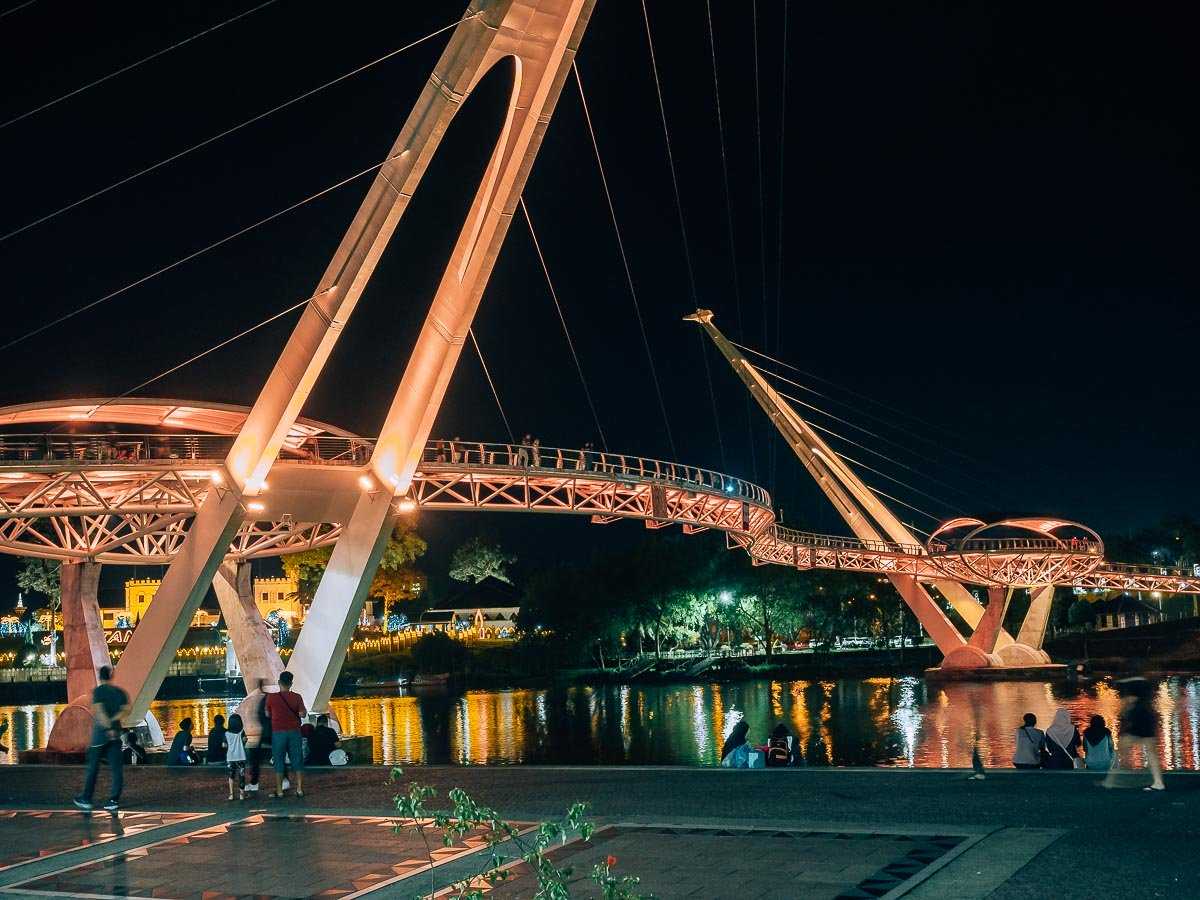 In pretty much every major city in Malaysia there is a more or less big Chinatown. This is no different in Kuching. Along the street “Jalan Carpenter” you can discover a lot of Chinese shops, workshops, old houses and also one or the other curious store.

In addition, Jalapan Carpenter has created a relatively hip restaurant and bar scene in recent years – a cool contrast to the otherwise traditional Chinatown. We liked the bar Drunk Monkey, the Indah Café or the Japanese Restaurant Kyushigai. You can find more about that in the section “Restaurants and Bars” below.. 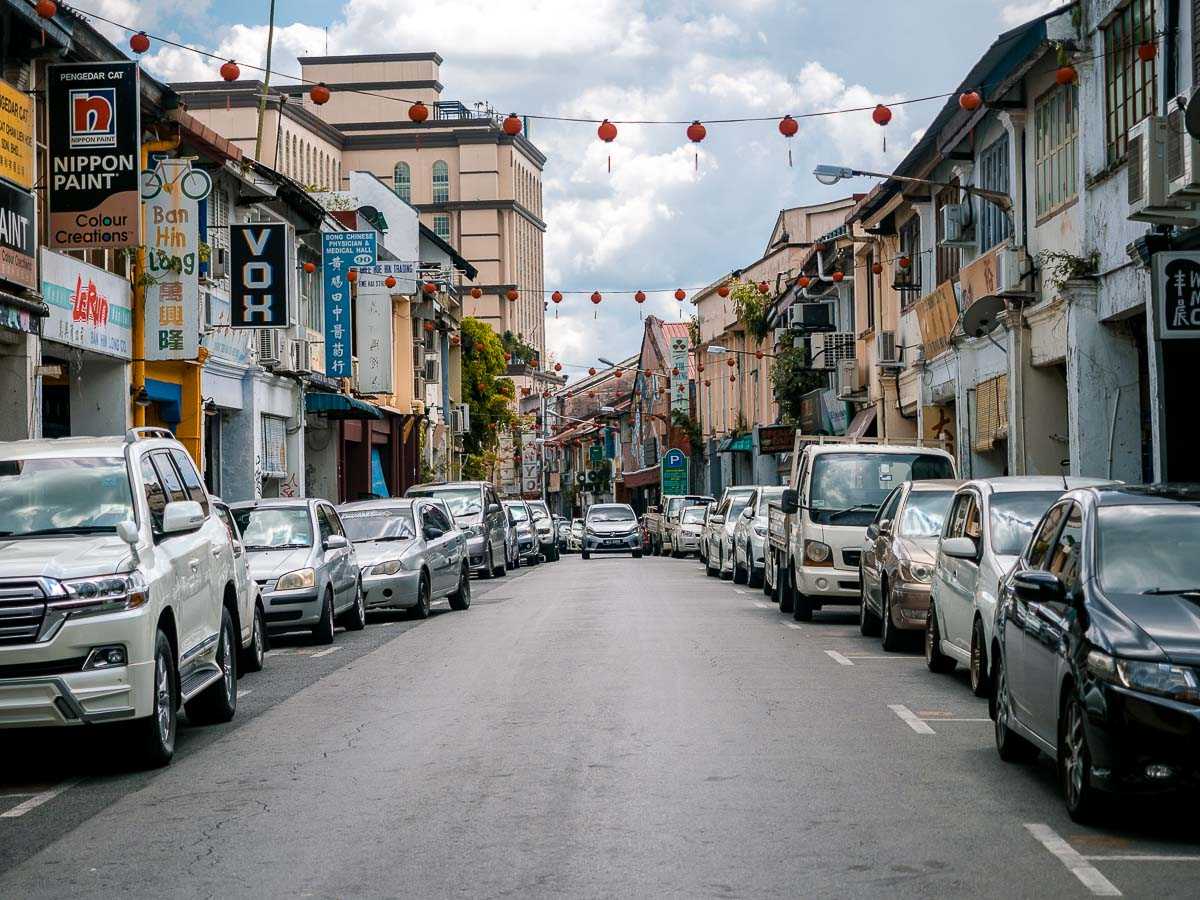 The Tua Pek Kong Temple is the most famous and oldest Chinese temple in the center of Kuching. It was built on a small hill overlooking the river and the waterfront promenade.

To be honest: yes, the temple itself is very nice and worth a look. Especially if you have never seen a Chinese temple before. However, he is not a blatant highlight. For example, there are completely different calibers in Kuala Lumpur. Kuching translates as much as Katzenstadt. And indeed, we’ve seen more cats here than anywhere else in Malaysia. Numerous cat statues are distributed throughout the center.

Whether one really has to see these statues is of course a matter of taste in the end. But cat lovers will definitely get their money‘s worth. Even a cat museum, which we did not visit, is in Kuching. Current you save with a credit card of Santander Bank lot of money when traveling. Why? We explain that to you here!

The Masijd India is a brand new mosque that opened in 2018 and was built on the Waterfront Promenade directly on stilts in the water. The location is so great.

But visually, the mosque has convinced us: Above all, the great mix of modernity and tradition that runs through the entire mosque. Together with the light blue color elements a really nice building.

In addition, we were received really friendly, had a nice conversation with a Muslim, then allowed us to move completely independently through the church and should absolutely immortalize us in the guest list. A great experience!

Note: At the entrance you can borrow a coat with a hood for free to cover your legs, arms and – in the case of women – your head too. Without the coat, you will not be let inside.

and the most important mosque in the city. While we found her really beautiful on the outside, her inner age was clearly noticeable. The Masjid India convinced us a lot more.

The hospitality was a bit cooler here. We were smiled nice (like everywhere in Malaysia), but were accompanied by a security all the time and the feeling of being constantly monitored.

Note 1: At the entrance you will be given a free coat to get inside the mosque.

Note 2: Unfortunately you are not allowed to shoot photos within the Masjid Bandaraya.

the road had nothing to do with India, but it is still worth seeing. Especially cool we found the countless colorful houses that drag along the entire Jalan India. There is also a daily market where you can mainly find clothes, shoes and sweets. Kuching is colorful, creative and cosmopolitan. You can feel and see that again and again. Mostly thanks to the countless graffiti spread all over the city. Every day we discovered really great and impressive works of art. Even the famous artist Ernest Zacharevic has already immortalized himself in Kuching and thus also on Borneo.

By the way, the small, nameless lane, which branches off to the right of the street “Jalan Pwoer” and is decorated with street art from beginning to end, is especially beautiful. Otherwise we can only say: Let yourself go through the city for a while and you’ll find lots of street art all by yourself. Fort Margherita is another great attraction in Kuching. The old fortification on the other side of the river dates back to the British colonial era.

Inside, you’ll find the Brook Gallery today: an exhibit on the Englishman James Brooke, who was strongly committed to and achieved the independence of the state of Sarawak. He is now considered more or less as a folk hero, although he himself was not a local.

The Brook Gallery we found really exciting, because there are some historical background about Kuching or Sarawak betrayed. In addition, you can climb the fort to the top and look forward to a terrific view. Very clear recommendation! Excursions in the area

As mentioned earlier, Kuching is not only a great city, but also a starting point for many national parks and adventures in Borneo. We would like to introduce you to two very special excursions.

The Semenggoh Wildlife Center is located approximately 20 kilometers from Kuching and is one of the last places where you can experience orangutans in the wild. This is where mainly apes, formerly held illegally, orphaned or injured, end up.

In the rehabilitation center, they are slowly getting used to life in the jungle and then released to the adjoining Semenggoh nature reserve. We were there ourselves and could experience the orangutans right where they belong: in the middle of the jungle of Borneo! An incredible trip that we want to recommend to you.