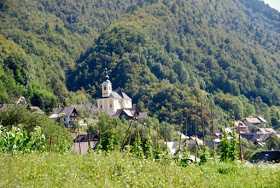 Who are these Leni and Mo? Leni is our two-year-old daughter and Mo her cuddly bear. Both were allowed to take their names from the blog on which I, Martina, the happy mom of the aforementioned Leni and Frau vom Liebsten, soon write about our life in Hamburg, Munich. About the small and big adventures in everyday life and on journeys. About our attempts to live more sustainably, about my love for doing and self-made things, about moments of happiness and dreams. Beautiful Slovenia: Holiday with a small child in the Bohinj Valley

In former times, i.e. in the pre-child age, we quickly packed a rucksack when we felt an acute wanderlust and set off, often without knowing beforehand where the road would lead us. Today, with a two year old whirlwind at our side, the longing for distant adventures is still great, but meanwhile we spend a little more time preparing for the trip and solving the challenges that the two year old travel crew member presents us with.

A fellow traveller who finally goes her own way without fear, without hesitation and without listening to the desperate calls of her parents. She complains loudly – and rightly, of course – if the food is not served fast enough or does not taste good; if the accommodation is not allowed; if the journey takes too long; if the boredom takes over; if everything is stupid at all and then – worst case – there is not even ice cream.

Car journey with a small child

We decided after gut feeling and so our summer holiday 2016 became a small road trip within Europe: We drove by car from Hamburg to Slovenia (which I can tell you more about today) and then on to Italy at Lake Garda. In each case we made a stopover on the way there and back with grandma and grandpa in Bavaria. So we could divide the long distance into on average 600km long stages, for which we needed about five to six hours – a time span, with which our daughter in the car still copes well. She usually sleeps at least two to three hours, for which I’m really grateful. In general, it is a good idea to drive especially late in the evening or early in the morning, because then the children ideally sleep at their regular bedtime. A nice side effect is that the sleep rhythm doesn’t get out of control immediately (but don’t get your hopes up: this happens sooner rather than later on holiday anyway ;-)).

We have never been to Slovenia before and all the more we were looking forward to this new adventure. We spent a week in Srednja Vas, a small village in the beautiful green Bohinj valley, at the end of which lies the Bohinjsko jezero. To the left and to the right rise the wooded mountains of the Julian Alps. A small paradise where we had the chance to spend a dream time.

Srednja Vas is like the other villages of the Bohinj valley surrounded by wide fields and meadows. There are many farmhouses, two Aunt Emma shops, a village square with a lime tree, small fountains, a church and a chapel on the slope (which we had to visit every day, because Miss Len was very enthusiastic about the flowers, candles and the devout Maria – “Kapella, Mia visit!” was the keyword), incredibly nice and helpful villagers, winding streets, old houses and very little traffic. 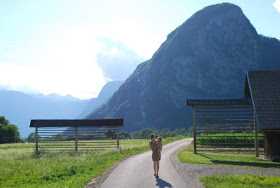 We had decided against camping and for the comfort of a holiday apartment and paid attention to a separate bedroom – so we could talk later in the evening with a glass of wine while the little woman next door was already sleeping. Another advantage of holiday apartments: You can prepare something to eat at any time without having to rely on restaurants. It’s also cheaper, but with the disadvantage that one has to do the dishes. The selection of holiday flats is relatively large and as the area is not (yet) completely overrun by tourists, we were able to book relatively short notice.

Almost every day we are on the eastern shore of Lake Weekin, the dearest and I on the bike, the little woman majestically in her Croozer. From Srednja Vas a cycle path leads through the flower meadows and fields along the river, past horse paddocks, beehives and fruit trees. The path is almost flat, which makes cycling very pleasant – especially for those who may be pulling a Croozer loaded with children and bathing equipment behind them (I pay my respects to their beloved). Only a slightly larger, but not too long ascent has to be mastered on the way back. 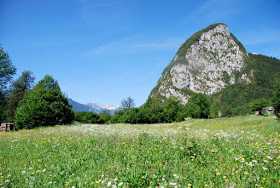 The Wocheiner See is ideal for a bathing day with a toddler: on the eastern shore there is a large meadow area with trees as well as small shady bays. The shore area is very shallow for the first three to five metres, so children can play and splash around in the water. And what water! Light turquoise turns into dark azure blue, crystal clear and fresh. You meet ducks and almost tame fish that Miss Len swam around her legs. As already written above, this area is fortunately not yet flooded by tourist masses. This made the lake visit very pleasant and relaxing. By the way, it is much more touristy at the Bled Lake, which is much better known and about 30 minutes away – if someone wants more hustle and bustle and action.

In the evening we went for a walk in and around Srednja Vas, picked flowers, collected pebbles at the stream and watched the farmers harvesting. Regularly there are small concerts in the village square under the lime tree, for example with zither and transverse flutes. 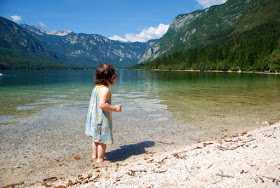 If you want to get a taste of the city air, you can simply drive for one day to the capital Ljubljana, which is only 1.5 hours away by car. The old town is characterised by stately houses from past centuries, many in need of renovation, but all the more charming. Small cafés, restaurants and shops line the street and it is possible to stroll in a wonderfully relaxed way. A coffee by the river Ljubljanica is a wonderful way to take a break and enjoy the Mediterranean flair. Then we did not see more of the beautiful city, as as always, the little woman set the pace. With her own rainbow umbrella she walked through the streets and danced through the rain. Of course, this doesn’t really get you far, but that’s not the point. She had a lot of fun and that was always the main thing during our vacation. 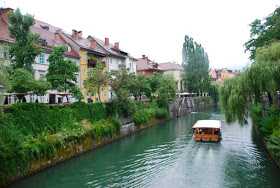 We spent a wonderful time in Bohinj, this idyllic valley and small paradise in the heart of Slovenia. It was so quiet, so peaceful, so green and warm that we would go there again at any time – and would like to recommend a trip there to everyone, especially with a small child. Kmalu, lepa Slovenija!