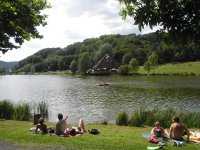 Between the Riedener mills and the village Rieden lies the reservoir with a water surface of about four hectares, which is fed from the Rehbach. Because the spring originally originated at the vicarage, the Waldsee is jokingly referred to as the “largest holy water basin in the world”. Owner of the lake is the Zweckverband Waldsee Rieden.

The lake is used for bathing when the weather is fine, the water fulfils the guidelines of the European Union (EU) as a bathing water, offers excellent water quality and therefore untroubled bathing pleasure. The beach is situated directly on the shore and a bathing plateau makes your stay varied. A building with changing rooms and sanitary facilities completes the offer.

In 2016, Waldsee Rieden was voted favourite lake in Rhineland-Palatinate by the water tourism specialist “Seen.de” and won 2nd place, which clearly underlines the popularity of the lake.

Bathing lakes are rare in the Vordereifel. There are no lakes like in my homeland in Baden. Only alternative: the Laacher lake and further in the volcanic Eifel the Maare. All the more beautiful that it exists: the Riedener Waldsee, which lies in between.

An artificially created natural lake celebrating its 30th anniversary this year. Beautifully situated between woods and meadows between Mayen and the small village of Rieden.

Here there are beautiful sunbathing lawns in the sun and in the shade, in the middle of the lake a small bathing island. And all this for free. You only have to pay for parking.

What are the most popular lakes in Germany? Where do visitors feel particularly at home? Are there “secret favourites” of the Germans?

With the “Little Baltic Sea”, as Lake Helene near Frankfurt/Oder is affectionately called because of its miles of sandy beaches, this year an insider tip from Brandenburg wins the biggest German lake voting, organized by the water tourism specialist Seen.de. In an exciting race, the Helenesee was able to prevail against strong competition from Bavaria and Hesse after two months of voting. Second place went to Lake Tegernsee, which won its first “favourite lake” title in Bavaria in 2011. Last year’s winner, Edersee, finished third on this year’s “Lieblingssee” podium.

Swimming pleasure directly at the holiday village Idyllisch and directly at the Waldsee Rieden is located here in the middle of the volcano park Eifel a holiday park for nature lovers who want to escape the loud and hectic hustle and bustle of everyday life.

Embedded in a slightly ascending valley, surrounded by mixed woodland with impressive beech trees, some of which are 100 years old, the holiday homes nestle in several terraces without through traffic on the southeastern slope of the Schmalberg.

Whether for a short weekend trip or your annual holiday – the time in the holiday village is ideal for shutting down and relaxing.

The origin of the forest lake 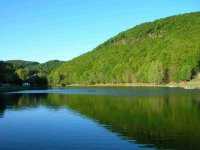 How do you turn a swampy area into a beautiful lake that attracts tourists? When this question came up more than 40 years ago in Rieden, nobody could imagine what had to be done to create such a lake near the village. Waldsee Rieden has been in existence for more than 25 years. Not all goals of that time have been reached so far. But step by step the community is on a good way.

Rieden. What hardly anyone in the region thought possible at the end of the 1960s became reality 30 years ago with the creation of Riedener Waldsee. However, it was a long way to the ground-breaking ceremony. The authorities had to be involved in the project, grants had to be awarded and permission had to be given for the construction. Investments of 4.7 million marks were necessary to realise the project.