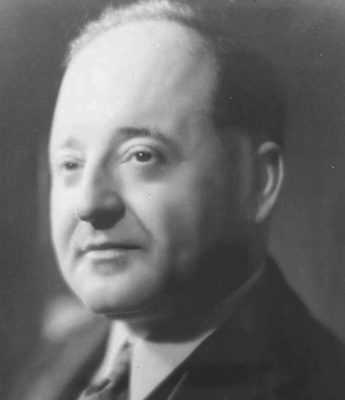 Son of a Jewish woman from Butzweiler

Louis Wirth is one of the great American sociologists of the 20th century. With his enormous versatility, he became known above all for his fundamental analyses of urbanization. It is part of the irony of the history of science that this eminent theorist of the city had his roots in the rural world of the Eifel and Hunsrück. Born in 1897 in the Hunsrück village of Gemünden, where the Jewish family of his father Joseph Wirth had lived for generations, Louis Wirth descended from the rural Jewry of the Southern Eifel through his mother Rosalie Lorig (1868-1948), who was born in Butzweiler. The paternal ancestors of Rosalie Lorig, a daughter of the Butzweiler cattle dealer Abraham Lorig, can be traced back to the 18th century in Butzweiler and the surrounding area. The assumption expressed – for example in a book by W. Vortkamp from 2003 – that Lorig’s mother came from a rabbi or scholar family is not correct.

The Eifler Lorig relatives played a decisive role in the career of Louis Wirth. In 1911 it had been his uncle Emanuel Lorig, who had emigrated to the USA, who had convinced his sister’s family during a stay at home that their first-born son Louis would expect a more promising future in the USA. Together with his sister Flora, Louis then emigrated to Nebraska, where Uncle Emanuel lived as a merchant. During the 1930s Louis Wirth succeeded in persuading his family to emigrate from Germany in time; his parents died in Chicago.

Louis Wirth attended Omaha High School in the USA before moving to Chicago University on a scholarship for gifted students. From then on, this top university remained at the center of his life, where his academic career steps took place: After stays in Arizona and Germany, Wirth became assistant professor in Chicago in 1931, and from 1940 he was a full professor there.

In 1923 Louis Wirth married Mary Lilly Bolton (1899-1976), who came from a Baptist family in Kentucky and with whom he had been friends since college days. The marriage produced the daughters Elizabeth Wirth Marvick (1925-2005) and Alice Wirth Gray (1934-2008). As a historian and political scientist, Elizabeth Wirth herself distinguished herself with remarkable publications in which she examined the actions of historical actors under psychoanalytical aspects. She is also responsible for important information about her father Louis. Louis Wirth had the distinct awareness of being a member of a minority as a Jew. This formative feeling was not only based on general statistics, but also corresponded to his personal experiences. Not only in his youth years, but also later as a participant at sociology congresses, Christian contemporaries were far in excess. From a religious point of view, however, Wirth broke away noticeably from the Jewish tradition; neither for him nor for his wife, for example, was their different religious affiliation a problem at marriage.

Wirth’s sociological research interests astound with their topicality and theoretical foundation. He analyzed the socio-cultural effects of increasing urbanization in depth. The title of his 1938 treatise “Urbanism as a Way of Life” illustrates this perspective. He was more convinced than many others of the importance of belonging to a group for people’s identity. This led Wirth to the fundamental question of how different groups can live together peacefully and prosperously in consensus – a question that is no less important today than in America, which was then characterized by sharp racial antagonisms (segregation). Wirth paid great attention to the phenomena of mass communication and the dissemination of knowledge and information. Even his remarks on these phenomena do not sound obsolete today in the age of the Internet and social media. A treatise published in 2013 on “Facebook as a Way of Life: Louis Wirth in the Social Network” convincingly emphasizes this topicality. Louis Wirth understood when intellectuals kept out of the public eye for their inner peace, but pleaded for leaving the ivory tower. He himself did this through numerous radio broadcasts, but also through various other activities. Wirth was President of the American Sociological Society and also President of the International Sociological Association. At the regional level, he was a leading figure in planning authorities, President of the American Council on Race Relations, and editor of sociological journals.

When the internationally renowned sociologist died unexpectedly of a heart attack in Buffalo in 1952, his death hit the 54-year-old at the height of his creative power. Louis Wirth still had ambitious scientific goals and there is little doubt that he would have achieved them.