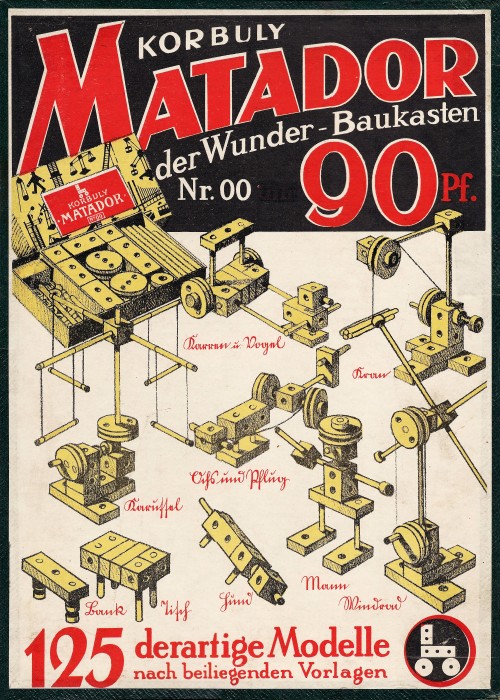 Small Matador poster from the 1920s.

The smallest construction kit No. 00 was advertised with this poster. On a photo of the matador stand on the This poster can be seen at Leipziger Messe from 1928. From then on, at the earliest, from around 1926 at the earliest, this motif must have been used. 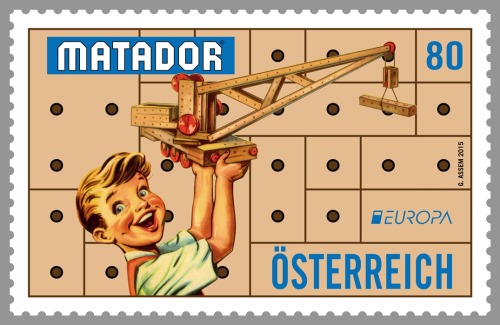 Austrian Post is dedicating a special stamp to the Matador kit. The brand will be released on May 7, 2015 in a print run of 300,000 copies. The design comes from Gustav Assem. The subject of the boy with a crane was drawn by Richard “Dick” Loederer and is taken from a cover picture from the 1960s.

In 1888 Gustav Lilienthal (the younger of the two Lilienthal brothers) developed a modular system based on evenly perforated strips. The box can thus be considered the predecessor of the construction kit systems developed later, such as Matador and Meccano. Except for the model of a windmill, which already contains a rotating shaft, all models to be built according to the templates are static. It was only around 1900 that Korbuly and Hornby (Meccano) developed their modular systems in which axes and shafts are central elements. It is not known whether Johann Korbuly knew about the Lilienthal system. The system, which Lilienthal called a model kit, was produced until the end of the 1890s, but could never really establish itself. Probably only a few hundred of these boxes were produced in total.

Above is a model kit No.III 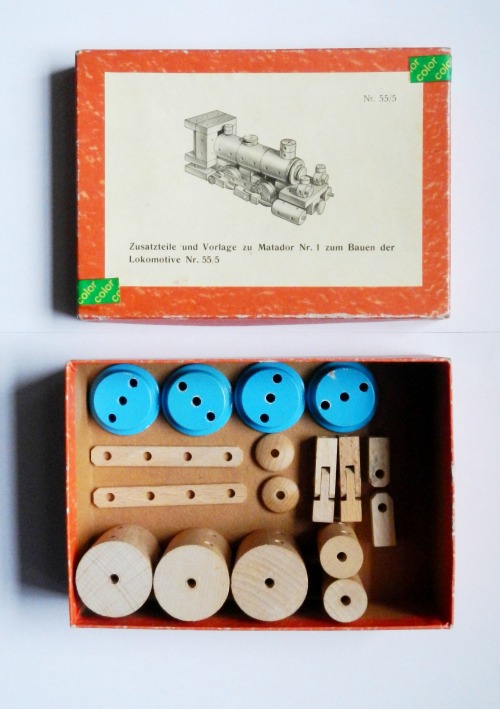 In the late 1950s / early 1960s, there were nine different sets of special parts to build smaller models under the designations 55/1 to 55/9. Interestingly, these boxes do not appear in any sales lists that I know of. Box 55/5 is shown above. As with box 55/6, the parts are packed in a box. The other compilations were offered in a plastic bag.

(Many thanks to Franz B. for providing the photos of the replica model.)

Two price lists from the German general importer Rudolf Finke, showing the range offered by Matador in 1962. The boxes Ki0 and Ku0 listed were probably only offered in Germany (or in other exporting countries).

The Matador store on Mariahilfer-Strasse in Vienna. The recordings probably date from 1976.

The business operated by the Matador company existed from 1913 to the late 1980s.

A copy of the spring motor described here from the 1920s. Some examples of this motor, which were sold by Walther as accessories to the Stabil construction kits, are known. The engine shown here has only recently surfaced and is the only one I know that has clearly been sold by Matador. 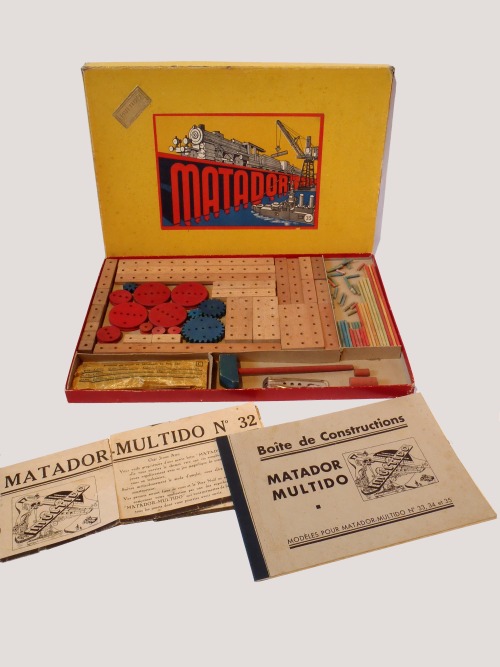 Matador kit no.35. The box pictured was sold in France in the 1930s. For a short time there was a subsidiary there, which bought some of the components from Austria, but also produced parts itself under license for a short time. The boxes were sold under the name Matador-Multido. The contents and templates of the boxes are (almost) identical to the boxes in the series for the 30th anniversary of Matador 1933 sold in Austria and Germany.

In early 1924, Matador launched a radio kit as a novelty. In the 1920s there were a total of five different such building kits with which one could actually build functioning radios. 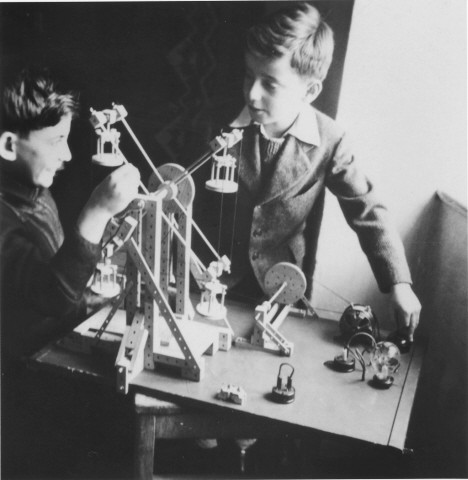 A photo from 1946 taken in the DP camp in Enns. Are shown Marcel Brettler and Wolfgang Schaechter.

The Matador model could originally have been a display model for toy dealers from the 1930s.

More information about the photo and the people shown can be found here.

The enthusiasm for war at the beginning of the First World War was used by the toy industry to bring war-related toys to the market.

“How much the war thoughts who holds children captive can be seen from the many war tools, the outlines of which have come to the inventor of the Matador… in the past few months ” Johann Korbuly writes in the “War Edition” of the Matador newspaper from Easter 1915.

From the beginning of 1915, Matador offered an extensive assortment of gun barrels that could be bought separately as a kit.

Shown above: Pages from the cannon instruction booklet from 1915.

It is difficult to determine how successfully the Matador cannons actually sold during the war. When the cannons were relaunched in 1926, there were probably still a large number of instruction manuals from the time of the First World War, which were then sold off.

The excerpt comes from Matador newspaper No. 71