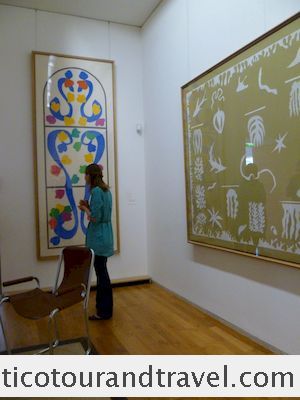 In the former Archbishop’s Fénelon Palace in the small town of Le Cateau-Cambrésis, where Henri Matisse was born, this special Matisse museum is a relatively unknown but remarkable art collection in France.

It is unique that Henri Matisse chose what he wanted to give the museum and how he wanted to arrange the works.

Subsequent donations and acquisitions completed the first picture of Matises development and change as an artist. The works of Auguste Herbin, born in 1882 in a village near Le Cateau, as well as the magazines and books of the publisher and poet Tériade complement two other collections.

Visit to the museum

The museum is divided into three permanent collections so that you can easily move from one collection to the next. The Matisse collection guides you through the artistic life of the artist, starting with the early paintings that he created in his hometown Bohain in Picardy. The city was built around the textile industry and he grew up with rich structural decorative designs and arabesque shapes that influenced his work.

The museum is compact enough to give you an adequate understanding of how Matisse created these vibrant, colorful images in paintings, drawings, sculptures, and inspiring paper cuts.

Tériade was a very important publisher-poet publisher who published the surrealistic magazine minotaure and later verve founded. He published 26 editions between 1937 and 1960 and commissioned the most extraordinary writers (Jean-Paul Sartre, Gide, Valéry and Malraux) and artists from Matisse, Chagall and Picasso to Bonnard and Braque to work on the editions work.

Between 1943 and 1975 he produced 27 books with artists such as Chagall, Matisse, Le Corbusier, Picasso and Giacometti. It was an exceptional series, with text and illustration being equally important. Teriade’s widow Alice handed them over to the museum in 2000 as independent works of art.

Auguste Herbin was born near Le Cateau in 1882 and grew up in the city. He trained at the art school in Lille and worked for a left-wing newspaper. He lived in Paris, discovered the works of Van Gogh and Cézanne, and was then influenced by the Fauvists and Cubism.

After the First World War, Matisse started what he called his "monumental objects" called – relief work in wood or cubist style furniture.There is an amazing piano from 1925 and polychrome reliefs. The most striking thing, however, is a huge glass window that was made for a primary school and consists of very large, monochrome surfaces.

Free admission for children under 18 and every first Sunday of the month.

Audio Guides are free with the ticket price and cover various aspects A visit to Matisse one about Herbin’s works, all in English. There is a good shop and a small café where you can take your drinks and sandwiches with you to eat on the lawn.

For children: There is the audio guide The story of Matisse for children .

workshops: There are workshops for fine arts, family and children’s workshops.

How to get to Le Cateau-Cambrésis

From Paris, take the Paris-Cambrai motorway (A1 then A2 – 170 kilometers) then take the RN43 from Cambrai to Le Cateau-Cambrésis (22 kilometers)

From Lille or Brussels take the highways to Valenciennes. Leave the motorway at the Le Cateau-Cambrésis exit and take the D955 (30 km from Valenciennes, 90 km from Lille).

Le Cateau-Cambrésis is with the Railway from Paris reachable to Brussels.

Read the guide to getting to Lille from London and Paris