What does typical medieval clothing for women look like? Which medieval costume wore which stand? We would like to clarify these questions and more recommendations give for very nice clothes.

Clothing according to the state – the medieval clothing of women

In order not to misunderstand the term "fashion" in the Middle Ages, one has to know that the clothing was subject to a fixed and written dress code. You had to dress according to your status.

The peasantry – or the "servant" 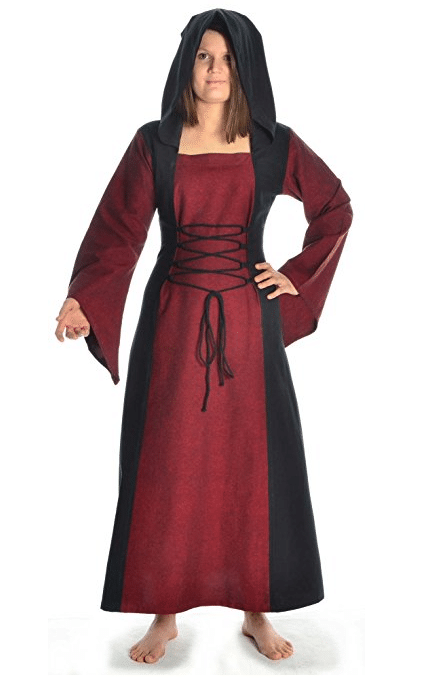 The bottom layer was that of the peasantry, the "ordinary people". It was characteristic of the middle ages clothing of a woman from the lower class that the materials for it came from in-house production. The basic materials were linen, wool, leather and flax. Dyeing the fabrics was very expensive, so most of the peasant women’s dresses were black and gray, less often brown. In summer, the very pleated and appropriate dresses were short-sleeved, in winter a long-sleeved dress was worn over the undershirt. The peasant woman’s headgear was either a hood or a felt hat. The hair was mostly braided. Material from in-house production was also used for the shoes of the simple stand: leather or slippers carved from soft wood formed the trousers of the medieval woman from the clandestine stand. Jewelry such as brooches or rings were reserved for the upper class. The medieval clothing of poor women looked very simple and poor.

The clergy differed in terms of pomp and splendor in contemporary fashion no more essentially from the nobility. In order to distinguish it from the rest of the population, they only held on to the long tunics of their underwear and gloves were used much more often than was the case with the nobility. The shape of the clothing also provided information about the status of the lady’s costume. The courtly lady wore her undergarment and tunic tightly tied to her body – clergy ladies did not dare to cloak the body shape. Ladies of the clergy wore hats or caps as headgear. In summary, the medieval costume of clergy women can be described as very ornate for those days.

The lady of the nobility and her wardrobe

The dress of the courtly lady underwent a fashionable development over the centuries. While the medieval clothing of women of the clergy and the peasantry remained practically oriented and functional until the end of the 14th century and slumbered in a sleeping beauty due to hardly noticeable changes in shape or length, courtly fashion experienced a constant redefinition. The fabrics for the noble tunics of the nobility had their origin in Byzantine workshops and were richly embroidered with gold plates. The shirt as undergarment and the skirt as overdress formed the main part of a courtly ladies costume. A coat or surkot completed the wardrobe. Ornate, removable jewelry sleeves, belts, trainers and gloves were the most important accessories. On the head unmarried noblewomen carried a shell, married or widowed women a rise (breast veil). Towards the end of the 14th century, horn caps were increasingly worn.

Where are medieval costumes for women still used today??

Especially fans of the Middle Ages, who like to participate in LARPs or dress up as medieval aristocrats in the carnival, benefit from the fact that some well-known manufacturers have specialized in the production of medieval clothing. The theater and film productions are always dependent on having such medieval costumes produced. A lady who is looking for long-forgotten worlds will feel most comfortable in a fine silk tunic. A soft cotton undershirt and a beautifully embroidered belt should not be missing. The fur-trimmed Surkot – or Kursit protect against cold in the winter months (carnival). The so-called “reversible shoes”, which can possibly reach up to the knee, and also some fashionable ones to form and a bowl or a horn cap complete the medieval costume for the lady.