Meninges: Overview of the structure of the individual layers 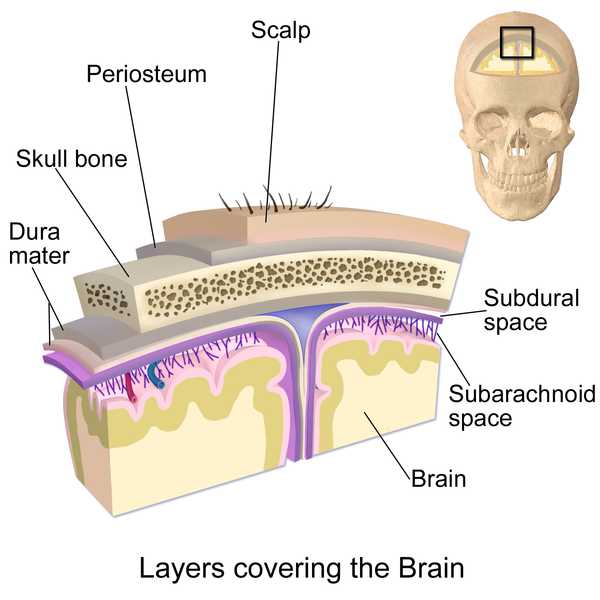 Different from outside to inside >

Structure of the dura mater 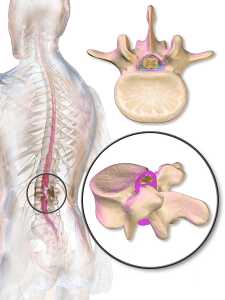 Exceptions are the sites where the em- itariae veins pass through the dura mater (see picture). The named veins turn into the venous blood conductors of the brain (Sinus durae matris), which are located between the two leaves of the dura mater.

In addition to the Venae emissariae also the bridging veins, which run between the arachnoid and the meningeal leaf of the dura mater, into the sinus durae matris. Injury of these bridging veins leads to subdural haemorrhage. Due to the close connection of dura mater and arachnoid, there is usually no real subdural space. However, as part of a subdural hemorrhage, detachment of the neurothelium of the arachnoid (s.u.) from the dura mater may result, creating an artificial subdural space.

Septa of the dura mater

In some places, the dura mater extends to the depths of the brain, forming septa, resp. Duplictions of the meningeal durablatte out. Overall, between four septa of the dura mater is differentiated.

The largest septum represents the crescent falx cerebri which runs in the longitudinalis cerebri fissure, and the be >

Another septum does that Diaphragm sellae This covers the sella turcica and also has a small opening for the passage of the pituitary. 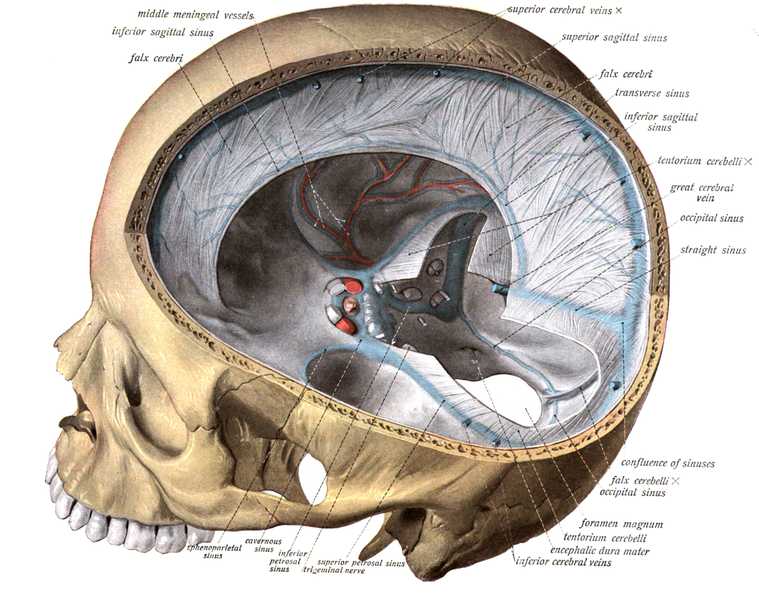 Blood supply of the dura mater

The blood supply to the dura mater, together with that of the periosteum and that of the adjacent cranial bones, consists essentially of three arteries. The main supply takes place through the A. meningeal media, which represents a terminal branch of the maxillary artery. The other two supplying arteries, A. meningeal anterior and posterior, Clinically, they play a minor role.

Traumatic craniocerebral trauma can lead to tearing of the A. meningea media and consequently to epidural haemorrhage. This epidural space normally does not exist in the brain due to the close connection of the dura mater and the periosteum. 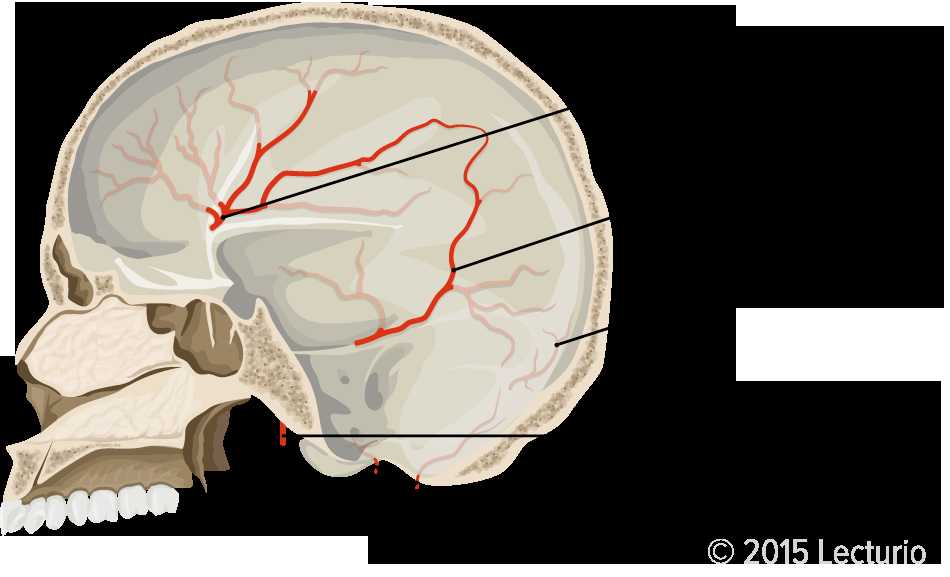 Blood supply of the dura mater

Innervation of the dura mater

The innervation of the dura mater takes place via the cranial nerves V (FIG.Trigeminal nerve), IX (N. glossopharyngeus) and X (N. vagus), as well as the first two branches of the cervical nerves. As part of meningitis (meningitis) there is an irritation of these sensitive fibers and associated headaches, as well as a refelector neck stiffness. In order to relieve mening as possible, there is also a restraint in the sense of hyperextension of the head. In contrast to the dura mater, the brain itself is not sensitively innervated and thus insensitive to pain.

Diseases of the dura mater

Due to the fact that the dura mater consists of tight collagenous connective tissue, it can be used in space-filling processes in the cranial fossa, e.g. Hemorrhages or tumors lead to entrapment of the septa. It is differentiated between an axial and a lateral entrapment.

The axial entrapment represents a symmetric entrapment by an equally pronounced process in both hemispheres (eg cerebral edema) top Axial entrapment, the two middle and lower parts of the temporal lobe are pressed through the slit of the tentorium cerebelli and thereby exert pressure on the midbrain (mesencephalon).

As part of a lower Axial entrapment occurs in the course of a displacement of the cerebellar tonsils by the foramen magnum and thus to a compression of the brainstem.

The opposite is the lateral entrapment, which occurs in one-sided space-occupying processes (eg brain tumor, bleeding). The ipsilateral herniation of the temporal lobe in the region of the tentorium cerebelli leads to a displacement of the cerebral limbs (crura cerebri) to the opposite side. This damages the pyramidal tract before crossing it to the contralateral side, i. the muscles on the opposite side are affected.

The Arachnoidea (Spinngewebshaut) represents the middle layer of the meninges and consists of a fine connective tissue layer. The part of the arachnoid which adjoins the dura mater consists of several layers of flat cells (Menigealzellen), this layer as neurothelium referred to as. The meningeal cells are tightly connected at this point via tight junctions and form a boundary between the dura mater and the subarachnoid space (blood-cerebro-spinal barrier).. 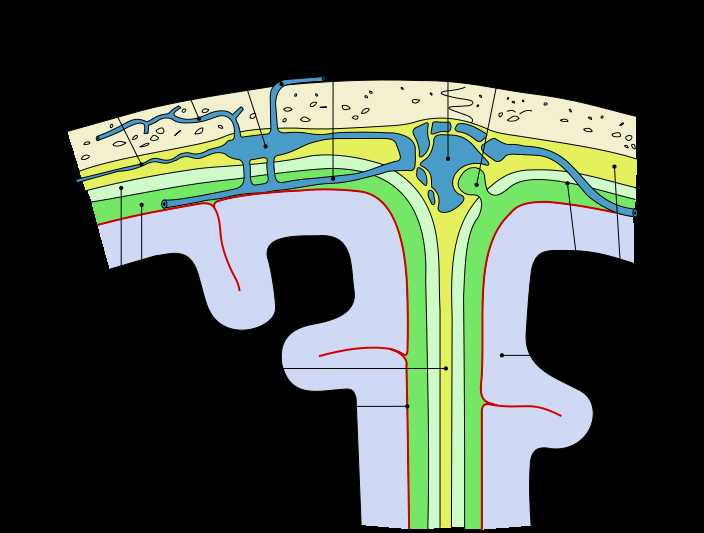 Image: “Diagrammatic representation of a section across the top of the skull, showing the membranes of the brain” by Mysid. License: (CC0 1.0) 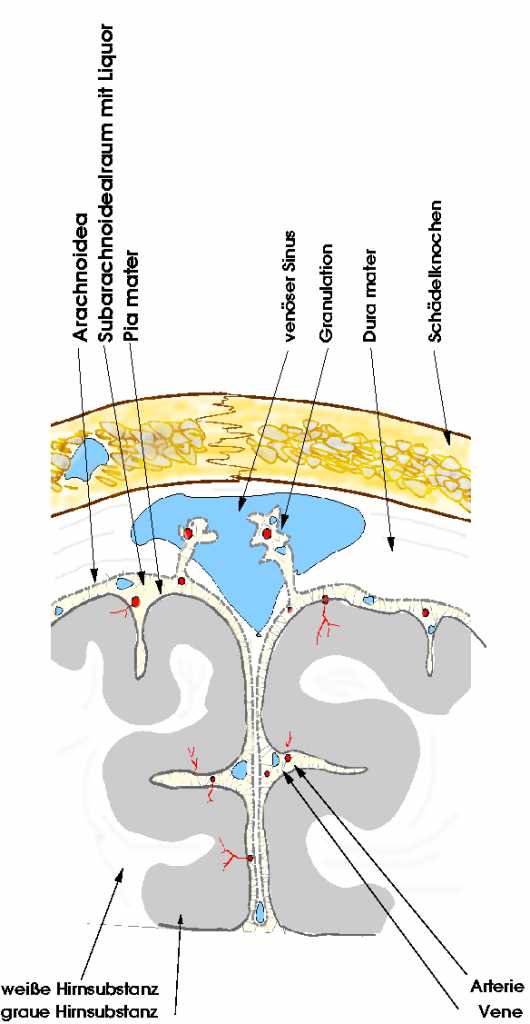 Furthermore, the subarachnoid space contains the Liquor cerebrospinalis, which is formed in the area of ​​the plexus chorodei (roof of the 3rd and 4th ventricle, wall of the lateral ventricle) and thus forms the outer CSF space.

The most important cistern represents in this context the Cisterna cerebellomedullary which is located between the cerebellum and medulla oblongata. This cistern can be used as part of a suboccipital puncture to gain cerebrospinal fluid for clinical diagnosis.

In everyday clinical practice, however, the lying in the lower lumbar area Cisterna lumbalis used much more frequently to gain cerebrospinal fluid (lumbar puncture), as there are fewer complications to be feared at this point than suboccipital ones. Other cisterns are u.a. the Cisterna fossae lateralis, the Cisterna ambiens and the Cisterna interpeduncularis.

The pia mater encephali is very vascular and forms the outermost layer of blood vessels that enter and exit the central nervous system, then descend into the depths. Together with the arachnoid, it forms the boundary of the subarachonoid space (see above). 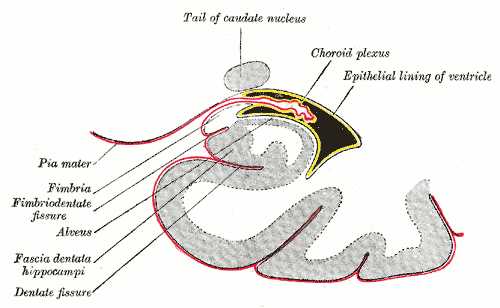 Popular exam questions about the meninges

1. Which statement applies to meninges?

2. Which statement about the dura mater is not correct?

3. What statement about Arachno >not too?

4. What statement about the Pia mater encephali applies?