Kaufmannsladen – the Christmas classic in the nursery 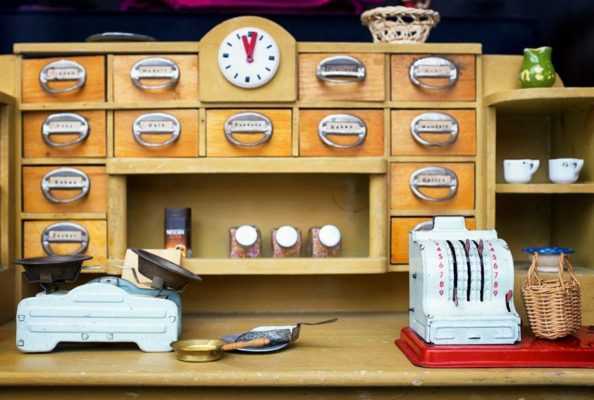 Of the Shop is considered a timeless, gender-neutral and now really old toy. But what positive qualities does the game with a shop really have? Experience this and much more in our merchant shop guide. Also: Ideas to build a shop yourself.

Background and history of the merchant store

The merchant shop had its origins in the age of industrialization. Children got to know the trade at that time and wanted to implement this playfully. The merchant store was already one of the more sophisticated toys and was at least equaled with cars and children’s kitchens and dollhouses or the already popular toy weapons; therefore more accessible to children from richer households. Merchandise shops for children as a toy have been familiar at least since the early 19th century and were made at the time, as well as the virtually simultaneously occurring doll houses usually by carpenters or other craftsmen as a single piece and often used as a custom for Christmas. It was not until around 1900 that the toy factories began to manufacture and sell shops with complete equipment. To this day, the shop is one of the classics in the field of children‘s toys and in only a minor modification to the original form still available and still popular as a Christmas gift for the child.

Why is the merchant store educationally valuable?

The game with the grocery store is not only fun for children, but also educational backgrounds suggest that children deal with this toy closer. Children learn a lot in dealing with the shop and can thus profit in many ways from this employment. Interestingly, the store covers a wide range of age groups, each of which can benefit from playing with their own small business at other stages of development. Therefore, the purchase of such a shop, despite the relatively high cost, is also a worthwhile investment.

Children playing with the grocery store play a very important part of everyday life, and that’s just shopping. Already very early, they are often already with the purchase with the parents. Thus, the own parents serve as role models for their own behavior when playing with the shop. The older the children become, the more consciously they experience the process of shopping. Often, the toy is interesting only at an age in which the children are already in advanced primary school age.

Special in playing with the shop, children learn to understand the complex processes within a shopping and playful to internalize. In addition, the social interaction is promoted when playing with the shop, because the customer must tell the seller here, what he would like to buy from him and the seller must respond to customer requests. At the same time, it improves the understanding of the language and children learn to play games with the grocery store better than in the game alone, to communicate – important for language development.

The playful handling of money, which children should learn as early as possible, is also educationally valuable when playing with the shop. Over time, they can estimate much more quickly what value exists for which things. They learn in-game that there are no gifts when shopping and, as they get older, they can better understand that every item in a store costs money and you can not fulfill all your wishes.

Children learn how to handle money with their own little shop and thus benefit from it for their future. Participate at times parents or grandparents in this game, the learning effect can be even greater.

At what age does the merchant store make sense??

The shop can make sense from the age of three. Usually, children start at this age already through the kindergarten with the shop – which often belongs there to the standard equipment – to employ. The handling of the money, the counting of money as well as the action learn children then automatically with increasing age. It is interesting that the merchant shop even at the age of 10 years or more often has not lost its charm.

What different types are there (doll shop, toy shop)?

In the past there were many different variants of the merchant shop. In addition to the grocery store or the grocery store with a wide range of products, there were also displays of retail outlets which were presented as textile and fashion shops, as hat shops and pharmacies and also as antique shops.

An important part of the selection of shops were the doll shops. These were usually – as well as the doll kitchen or dollhouses – very compact, but tended to not only the girls reserved. Doll-sized goods miniatures were distributed in a dollhouse-like building. Only since the nostalgic wave of the 80s, these mini-shops were again really popular, as seen here as a hat shop. This type of stores today is mostly on eBay.

The classic doll shops were then out of fashion over time and so the merchants stores quickly became a gender-neutral toy, with both boys and girls alike liked to play and above all, with each other – so role playing was now possible. The goods packages of Spielkaufläden are also usually greatly reduced, but much larger than a doll shop.

Where can you buy goods for the merchant shops?

In virtually every toy department of department stores, but also in specialized toy shops, the goods are available for the merchants stores. Here are usually already assembled networks available. It is interesting that a great many goods that can be offered in the shop are exactly the same as the originals of the adults. This means that detergents, cocoa, cheese and many other goods are made in the smallest format but identical to the original. A wide range of accessories is also available on livingo.de.

With a little skill can be goods for the shop but also manufacture itself. Small boxes, papier-mâché and opaque colors are useful basic ingredients. The boxes can be shaped and painted as desired and then displayed as a product in your own miniature shop – creativity knows no bounds. Also, various recipes such as the small cake lollipops or real heath sand are suitable for sale in their own small shop.