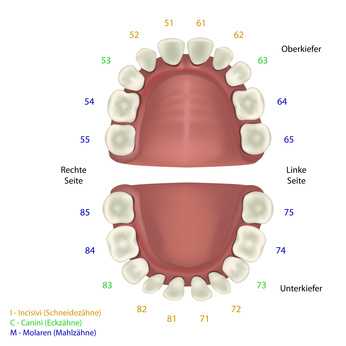 Milk teeth are the preliminary stage of the permanent teeth of an adult human being. The first milk teeth break through the child’s gums around the sixth month of life and fall out one after the other from primary school age to be replaced by permanent teeth.

The human “milk dentition” consisting of milk teeth consists of only 20 teeth. These are incisors and canines as well as a few molars. The milk teeth are considerably smaller than the later permanent teeth and have only very small roots, since the permanent teeth would have no place at all in the mouth of babies and children.

Milk teeth have completely broken through around the age of 3, the first incisor (usually in the lower jaw) can break through as early as the sixth month.

They have hard enamel on the outside, but the layer is much thinner than with permanent teeth. The pulp of milk teeth, on the other hand, is larger. Depending on their position in the teeth, they also have one or up to three very thin, often finely woven roots. The root of a deciduous tooth is so thin because it must first be dissolved (“resorbed”) by the permanent tooth before it can break through.

Like a permanent tooth, a milk tooth has so-called dentine channels in the dentin, which are larger in the case of milk teeth than in the case of permanent teeth. Milk teeth therefore have an increased risk of contracting bacterial infections – this risk is also increased by the comparatively thin enamel layer, which can hardly provide long-term protection against bacteria.

When the milk tooth is finally ready to fall out, its thin root dissolves through the development of the permanent tooth under it. It sits loosely and falls out either by itself or by playing around with the tongue, in order to be replaced immediately or within a few days by the tooth underneath.

Thanks to the milk teeth, children also already have a set of teeth and are able to perform important functions in everyday life such as eating or speaking. The fewer milk teeth a child has, the more incomprehensible its vocalizations are. The teeth occupy a different, but equally important, position in the speech process in every human language, and it is only in this way that the clear formulation of sounds is possible.

Equally important is the function of the milk teeth when eating. The first milk teeth still break through when the baby is eating only milk. However, some babies are more interested in their parents’ food from the age of six months onwards and are allowed to try it if they can chew it to some extent.

For very finely pureed paps, the teeth are sufficient at first, but the food should become increasingly firm in the long term. As the first permanent teeth can only break through from the age of six, the milk teeth fulfil an essential function and enable normal food intake, especially in these years.

Due to their anatomy, milk teeth are unfortunately very susceptible to bacterial attack due to lack of oral hygiene. Very few children have caries problems on their own. A food with a high sugar content as well as too rare tooth brushing with a toothpaste suitable for children should be avoided.

Brushing your teeth in the morning and in the evening as well as at least avoiding sweets before bedtime should be the minimum amount of dental care to prevent bacterial infections. In the worst case, tooth decay can lead to premature loss of the milk teeth, as they no longer hold in the gums or have already partially broken off.

In addition to the caries risk, it can also happen that milk teeth are too tight and therefore do not fall out in time. Even then, they represent a risk for permanent teeth that could be disturbed in their position. In these cases, milk teeth must be extracted by the dentist.