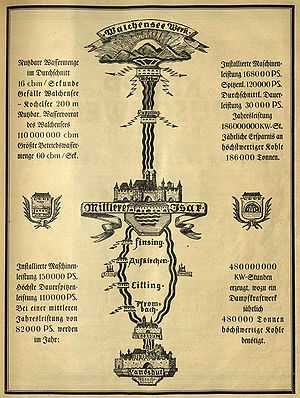 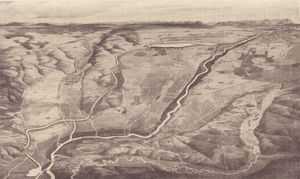 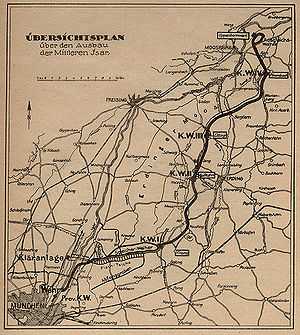 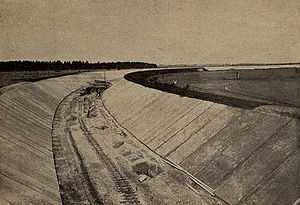 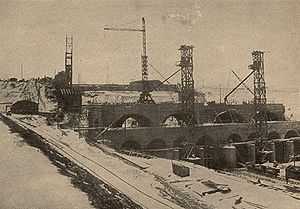 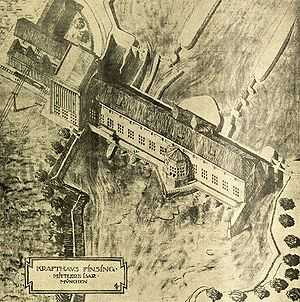 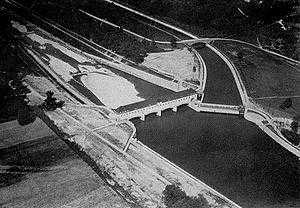 Since the beginning of the 20th century, plans for the use of Bavaria’s rich water resources to generate electricity on a large scale have entered the realization phase right at the end of the First World War. After the construction of the Walchensee power plant had been started in 1918, the power engineering expansion of the Isar between Munich and Moosburg by the operating company Mittlere Isar AG was completed in two phases from 1920 to 1924 and from 1926 to 1929 also in an act of active state labor market policy.

Mittlere Isar AG was founded on January 5, 1921, on the same day as Walchenseewerk AG, in Munich by representatives of the Bavarian state ministries and the Bavarian State Bank. The first chairman of the board was the ministerial councilor Franz Krieger (born 1876), who was active in the highest building authority. The board of directors was Franz Wörner (1859-1937) and Erhard Auer (SPD, 1874-1945) as the first vice president of the Bavarian Landtag , in front.

On January 28, 1921, the state parliament decided to take over a comprehensive state guarantee for bonds of the Mittlerer Isar AG. The founding capital of the company amounted to 75 million marks, which initially drew almost completely the Bavarian state. Increasing inflation necessitated a gradual increase in share capital to 1.9 billion marks by the end of 1923. In the course of this increase, the German Reichsbahn acquired by contract between the Reich Ministry of Transport and the Mittlerer Isar AG from 21./23. November 1923 a ninth of the share capital.

The technical equipment and its construction history

Up to 8,100 workers were simultaneously employed in the construction of the facilities. They consist of a 54 km long work channel, which derives the Isarwasser in Munich-Oberföhring in a southeasterly direction and only at Moosburg back into the natural river bed, several reservoirs and a power station stairs, in the height difference between the channel beginning and end of 88 meters gradually used for the production of electrical energy.

From 1920 to 1924, the large inlet weir at Oberföhring and the power plants Finsing, Aufkirchen and Eitting were built. The canal ended first above the village of Berglern, from where the water flowed back over the Semptflutkanal into the Isar. At the beginning of 1925, these systems started supplying electricity.

In a second construction phase between 1926 and 1929, the canal was extended to Moosburg and Perstombach built a fourth barrage. The original turbine power of all four power plants together was 160,000 hp; thus almost 500 million kWh of electrical energy could be generated annually (Walchenseewerk: 180 million kWh / year).

Merger with Bayernwerk AG in 1942

During the Nazi era, the Reich gained massive influence over the Bavarian electricity industry. After the reich own United industrial enterprises AG (VIAG) 1939 had already taken over large parts of the share capital of the Bayernwerk AG, transferred the Bavarian state on 3 July 1942 also shares of the middle Isar AG over 6.2 million RM to the VIAG, the one-third of the total capital of RM 27 million.