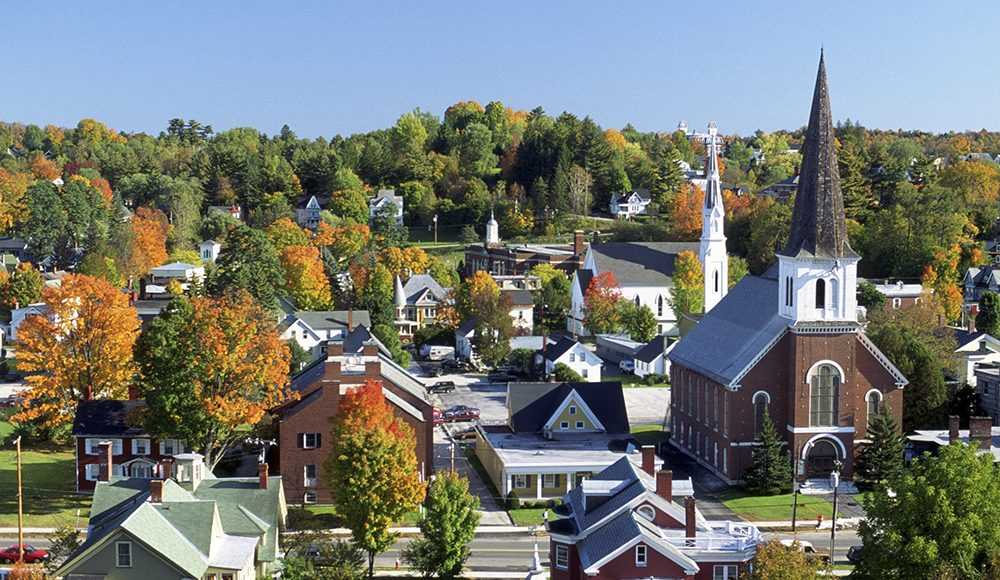 Just under 7900 people live in Montpelier, which is the smallest of all capitals of US states. Although there are still around 12,000 commuters on workdays in the city, that too does not make Montpelier a metropolis. The town in the northern half of Vermont remains a tranquil, often laid-back place with little houses, lots of greenery and a vibrant downtown. The Canadian border is just over 100 kilometers away. Montpelier can be reached via Interstate 89. On this route, Burlington, Vermont’s largest city, is about 45 minutes away; There is also the nearest airport with regular service.

The city is named after the French city, but is spelled with a L less. The reason is not that French explorers laid the foundation for the place. It was a two-man expedition from nearby Massachusetts, consisting of a colonel and a general. At that time, there was great gratefulness for the French in the already existing colonies of the country, because they supported the Americans during the Revolutionary War. From a wooden hut built by the two discoverers, a small settlement developed in a very short time. In 1805 it was decided to turn the town into the capital of Vermont; the reason was mainly the central location. The most important moment for the city came in 1849, when Montpelier got connected to the railway network. This allowed local craftsmen to better sell their products and attracted new residents.

The most significant attraction in Montpelier is the Vermont State House (State Street, open Monday-Friday 8-16 clock), the seat of the state government and the state parliament. The building, which is visible from afar in the small town and built in Greek revival style between 1857 and 1858, has a striking golden dome topped by a statue called “Agriculture”. Inside the building are numerous other works of art, including several paintings and a statue of Ethan Allen, one of the founding fathers of Vermont, in the entrance area.
A virtual tour of the building is possible through this link on Google Street View.

The meadows surrounding the State House often serve as a gathering place for locals gathering for picnics and sports, and often listening to music during the summer months. Local bands play here as well as occasionally the Symphony Orchestra Vermonts.

Just steps away from the State House is the building The Pavilion (109 State Street), which is a replica of a formerly identical hotel. The building now serves as the residence and working seat of the Governor of Vermont. It is also home to the Vermont History Museum (open Tuesday-Saturday 10-16), which traces the history of the state. Another icon of the city is the New England Culinary Institute, which trains future celebrity chefs. Students and lecturers work together in restaurants and cafes in the city, which also has something to offer gourmets. Other attractions in Montpelier include the Roman Catholic Saint Augustine Church (Barre Street) and the listed former homes of city-born painter Thomas W. Wood (Northfield Street). The focal point of the small town is the City Hall, built in 1908 with its striking tower on Main Street.

In the surroundings of Montpelier you will find other worthwhile destinations. This includes, for example, in the neighboring Barre the Vermont Granite Museum (7 Jones Bros Way). It deals with the long tradition of mining granite in the state, which is also associated with many traditions and stories. In St. Johnsbury, also just a few miles from Montpelier, worth a visit to the Fairbanks Museum (1302 Main Street, open daily 9-17 clock). It consists of an extensive collection on the natural history of the region and a planetarium. A popular destination for visitors and locals alike, Mount Mansfield, which is about an hour’s drive away, is the highest point in the state at 1339 meters. There are several recreational opportunities, especially for hiking in summer and skiing in winter. The mountain is one of the Green Mountains that gave the state its name.