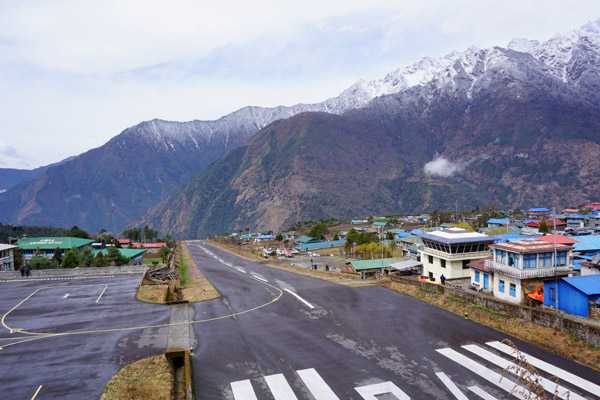 Our travel specialist Daniela explored the Himalaya Mountains in Nepal on foot for three weeks. In her blog article she reports enthusiastically about spectacular views, strenuous ascents and unique encounters with the hearty Nepalese.

My three-week hike on the Three Passes Trek through Sagarmatha National Park started with the adventurous flight from Kathmandu to Lukla. After a sleepless night in Kathmandu we sat at 6 o’clock in the morning twelve in twelve in the small propeller machine, a stewardess distributed sweets against the nervousness and so the adventure began. I was excited about the tea houses we visited and looked forward to seeing the waving prayer flags on the peaks and passes.

The famous infamous airport in Lukla 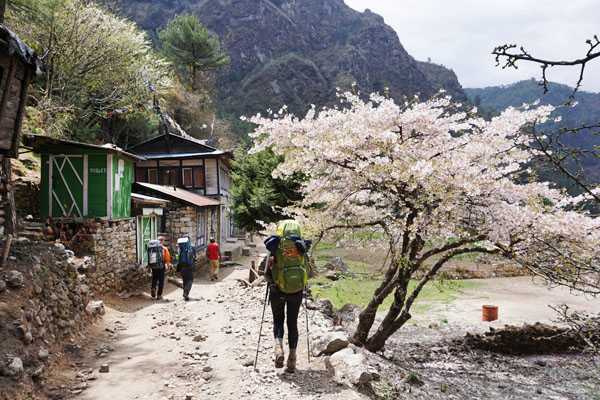 The ascent to Gorak Shep

In the first two days we climbed along the turquoise Dudhkoshi River, through coniferous and rhododendron forests and countless Sherpa villages from Lukla (2610m) up to Namche Bazar (3440m). On the second day we passed the famous Hillary-Bridge. But my personal highlights were the countless donkeys and yak caravans as well as the porters, which carried impressive loads and overtook me regularly. 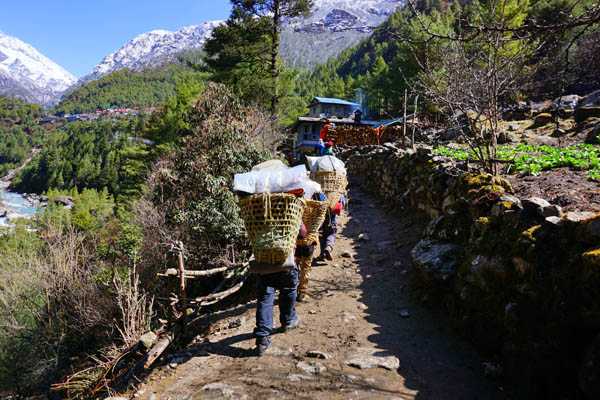 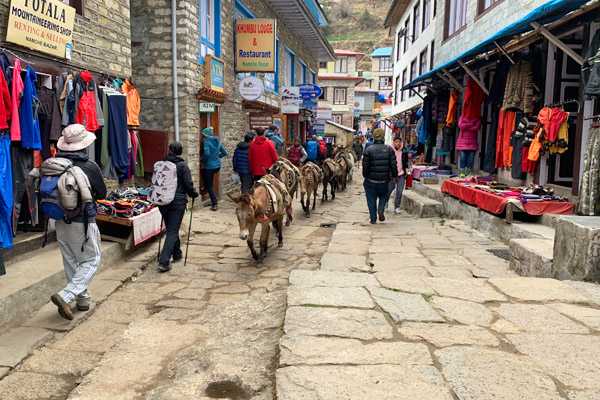 In the streets of Namche Bazar 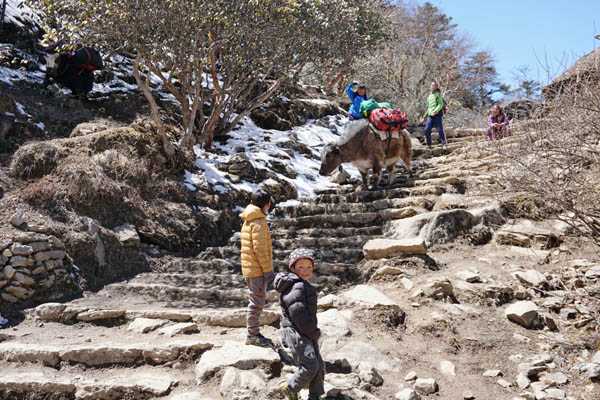 On the following acclimatization day in Namche Bazar we climbed up to the Everest View Hotel and saw the highest mountain in the world for the first time. I was prepared to see Mount Everest comparatively rarely during the hike, but I was surprised how much it is overshadowed by the surrounding mountains of Nuptse, Lhotse and the ever-present Ama Dablam. 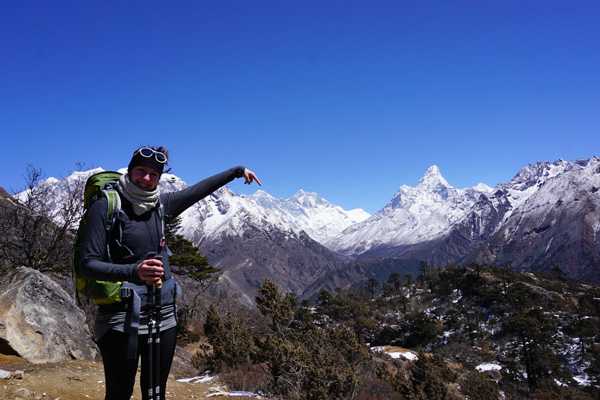 The first 8 days we hiked on the classic Everest Base Camp Trek to Dingboche. There the paths separated and we went the less visited Three Pass Trek to Chukkung. After an additional acclimatization day we hiked over the Kongma La Pass (5535m) to Lobuche. For the first of the three passes we had wonderful weather, so that we could enjoy great views. Since the individual daily stages are limited by the altitude and therefore quite short, the pass days are, in contrast, with 8 to 10 hours very long and above all exhausting. 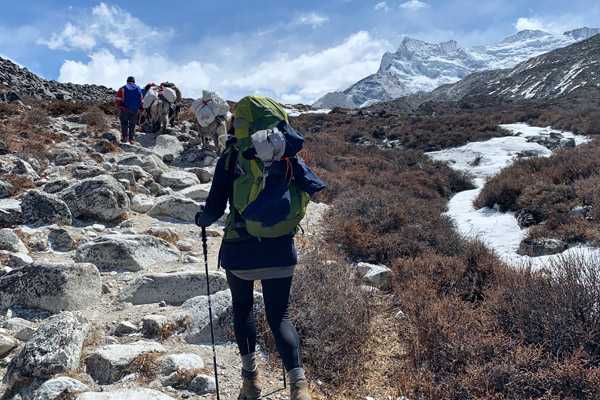 On the way to Chukkung 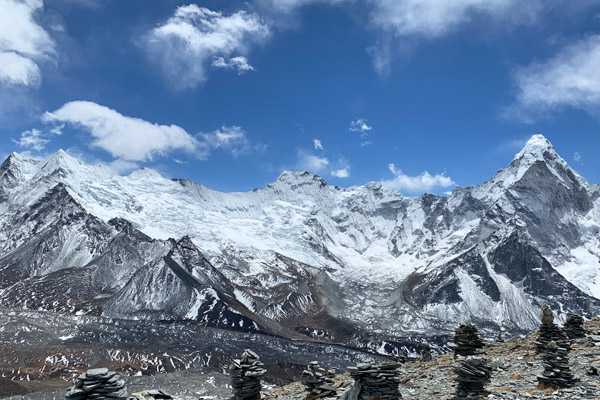 The Mount Everest Base Camp

The day after the first pass crossing we reached Gorak Shep (5140m). It is the highest place and starting point for the visit of the Mount Everest Base Camp. Despite low hanging clouds and first snow we started early in the morning on the three-hour way to the base camp. Although we shared the trail with many hikers, porters and never-ending yak caravans, it is a unique experience. Arrived at the base camp, it snowed heavily and so we could only imagine the whole circumference of the camp. There was a great atmosphere, for many hikers like us this is the goal of their trekking. For those who wanted to reach the summit, it was just the start of their adventure. After we had looked around curiously for some time, we started frozen on our way back to Gorak Shep. 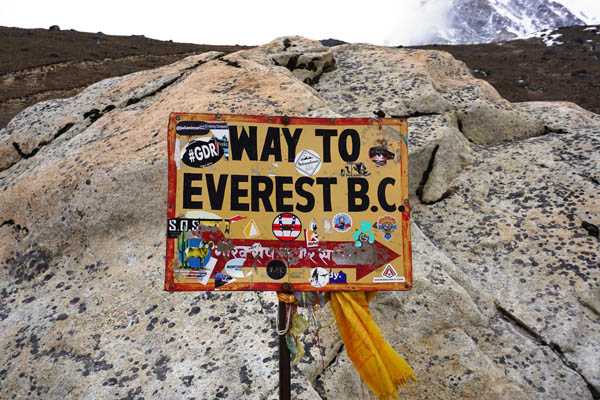 On the way to Mount Everest Base Camp 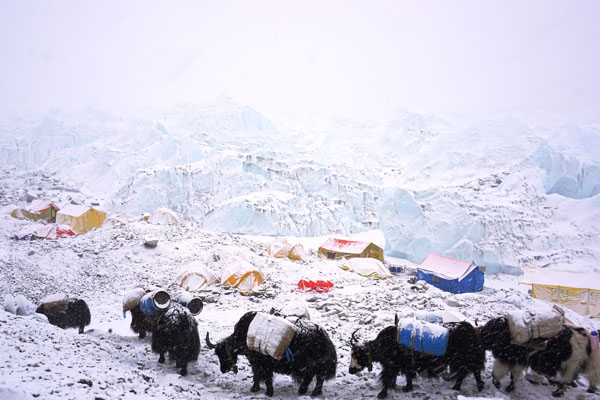 The snowy tents at Mount Everest Base Camp

For the hikers on the classic Mount Everest Base Camp Trek we went from here in about three days back to Lukla. With the Cho La Pass (5368m) the next challenge was waiting for us, which brought us to Gokyo (4790m). Because it was very cold this year, we could not admire the famous turquoise blue glacier lakes around Gokyo, because they were still frozen. Nevertheless we felt incredibly comfortable in Gokyo and enjoyed the wonderful panoramic view from Gokyo Ri (5357m) to Mount Everest and its neighbours. Gokyo and the frozen lake Over the last pass Renjo La (5360m) it should go back to Namche Bazaar. But as I got a cold in Gokyo, we decided for a less strenuous descent, which in retrospect was one of the most beautiful stages of the day, so that I didn’t grieve long after the missed pass. 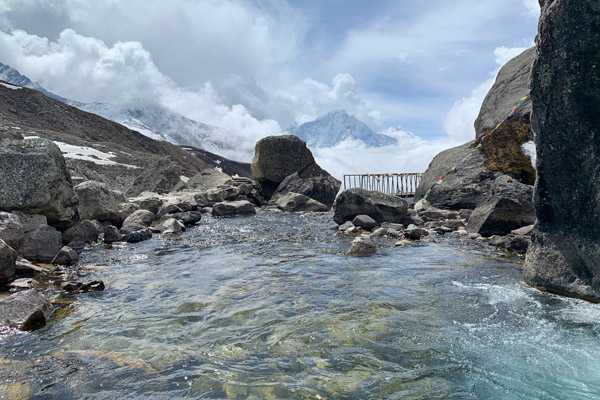 On the way from Gokyo to Dole 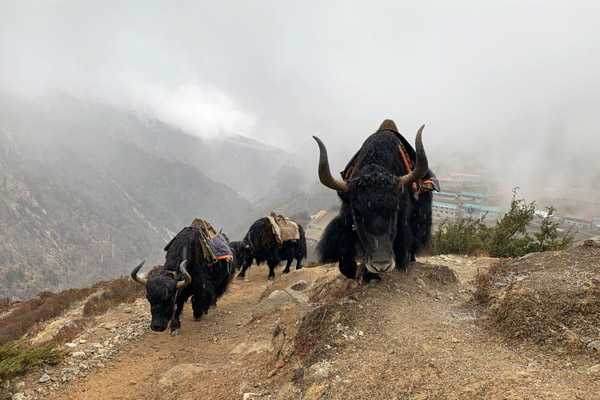 In the run-up to the trip, I often wondered whether I could manage the three passes and what exactly I could expect from a pass. Since I approached both passes slowly and relaxed and was sufficiently acclimatized in advance, I was able to master the sweaty ascents to the top in about 4 to 5 hours. On the Kongma La we had impressive views in both directions, whereas on the Cho La we were in a thick cloud, which is also an experience.

For the descents and the final glacier crossings, all the willpower was needed again. The glaciers resembled a hilly moon landscape and it was incredibly exciting, but also very strenuous to cross them. The pride was all the greater when one made it to the next village and to a cosy guesthouse.

If you have enough time, the Three Pass Trek is a wonderful alternative to leave the more touristic main route of Mount Everest Base Camp Trek, to explore the Khumbu region extensively and still not miss any of the highlights of the famous main route. If your interest in a trip to Nepal has also been aroused, please take a look at our round trips and travel components.